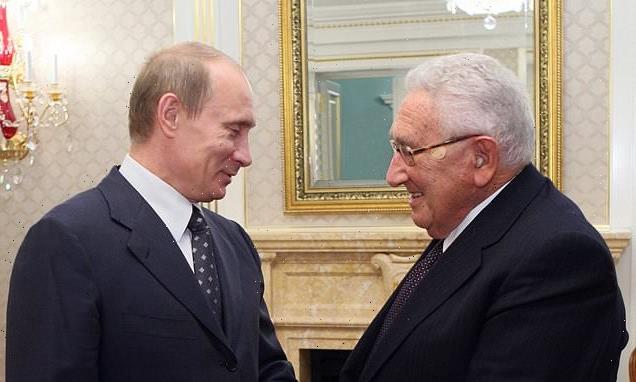 Henry Kissinger’s talk of appeasing Russia is the rambling of a foolish has-been: Top historian ADAM ZAMOYSKI gives his withering view of the veteran US statesman who wants to sue for peace with Putin

Why on earth did anyone think it was worthwhile having Henry Kissinger speak at the plutocrats’ jamboree, Davos, this month?

The veteran American statesman, 99, fancies himself as something of a historian. But he seems stone-deaf to some lessons of history — and as he spoke to the assembled dignitaries in the Swiss ski resort, he seemed in denial about his own lamentable legacy of appeasement.

Today, Kissinger is urging Ukraine to begin negotiations with Russia, ignoring the fact that Vladimir Putin has categorically refused to contemplate talks with President Zelensky’s government.

‘Ideally, the dividing line should be a return to the status quo ante,’ he said. By this, he meant that the starting point for negotiations should be that Russia be allowed to keep Crimea — the Ukrainian region it seized by violence in 2014 — and the Donbas, the border-region in eastern Ukraine that has seen some of this war’s bloodiest fighting.

To me, Kissinger’s suggestion smacked of the Munich Agreement of 1938, when then UK Prime Minister Neville Chamberlain proferred Hitler portions of central Europe in a failed bid to satisfy the dictator’s lust for more territory.

A man like Kissinger, who fled Nazi Germany to the U.S. as a Jewish refugee that very year, should recognise the historical resonance. But no. Instead, Kissinger argues that the West must avoid alienating Russia which, he claims, has been ‘an essential part of Europe for 400 years and has been the guarantor of the European balance of power structure’.

Not true. Actually, Russia’s greatest achievement during most of that time (from 1613 to 1917) was to expand at a rate equating, on average, to 55 square miles per day.

In the 50 years between 1772 and 1812, Russia’s border shifted westwards by almost 400 miles, and at the Congress of Vienna in 1815, which sought to restore the balance of power in Europe after the Napoleonic Wars, Kissinger’s hero, the Austrian Chancellor Metternich, allowed Russia’s border to move another 100 miles or so further into Europe. 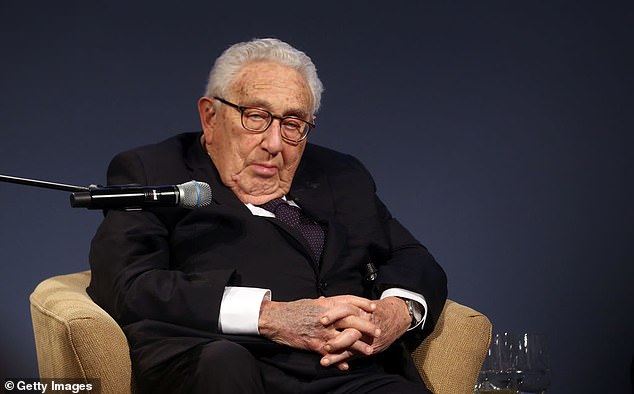 The Congress — and Russia — in fact did little to guarantee European peace during the 19th century. Unrest, revolution and war flared up across the Continent over the following decades, ending in cataclysm in 1914 at the outbreak of World War I.

What the Congress of Vienna truly achieved, and what Kissinger seems to be advocating, was the suppression of the legitimate aspirations of peoples to rule themselves.

History teaches us that when such powerful aspirations are harshly repressed, they eventually explode into violence.

Austria, Germany and Russia imploded in 1917 and 1918 and gave rise to Bolshevism, fascism, Lenin, Stalin and Hitler.

It also unleashed unimaginable hell on the people of Ukraine — including a famine induced by Stalin that cost millions of lives.

This is the lesson of history that Kissinger should heed. Instead, he now insists: ‘If Ukraine is to survive and thrive, it must not be either side’s outpost against the other. It should function as a bridge between them.’

The silliness of this statement is barely believable. Ukraine is an outpost of democracy and civilisation — and it is confronting tyranny and barbarism.

What’s more, it already is a ‘bridge’: giving passage to ideas like freedom and democracy and providing a view of what life might be like for ordinary Russians if Putin could be given the heave-ho.

That is precisely why the dictator felt he must invade it and install a puppet regime that would turn it into another Belarus. All these facts seem to have passed Kissinger by.

Kissinger is a believer in Realpolitik — in which politics are conducted based on practicalities, rather than grand ideological principles. But he is a poor practitioner.

One reason is that he is too theoretical and has a weak grasp of reality. Another is that he is too impressed by power and fails to face up to bullies. What he is good at is wrapping up this pusillanimity in high-sounding emollient phrases.

He went on to say that we should avoid confrontation ‘unless we are prepared to make regime change the principal goal of our policy’.

But regime change by one means or another has always been the policy of the West, as the world cannot be a safe place when large parts of it are ruled by nuclear-armed delinquents like Putin.

It is, of course, desirable to achieve it by peaceful means, but that requires strength and resolve, not pandering to tyrants. And it requires calling things by their name.

Avoiding the term ‘invasion’, Kissinger speaks of Putin’s ‘miscalculation’, as though it were some kind of unfortunate slip that should be treated with indulgence. Hitler certainly ‘miscalculated’ when he sent his tanks into the Soviet Union in 1941 — but everyone still calls it an invasion. 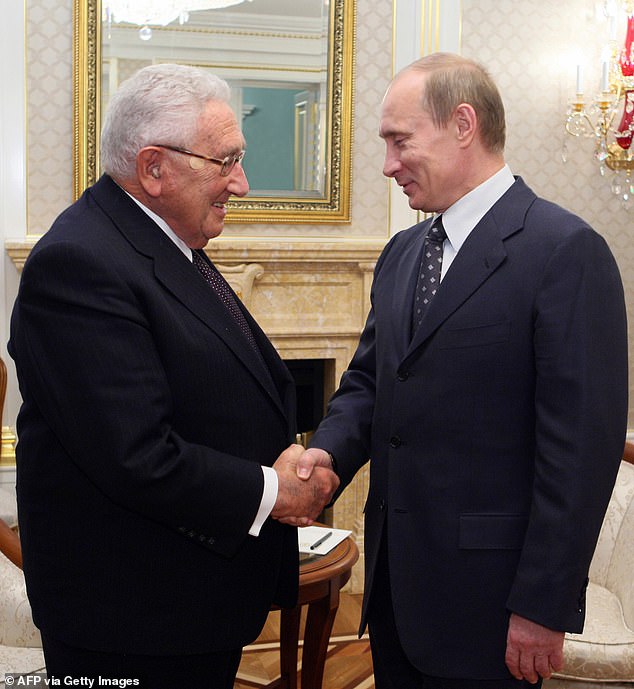 Kissinger speaks of Putin’s ‘miscalculation’, as though it were some kind of unfortunate slip that should be treated with indulgence Pictured: Russian Prime Minister Vladimir Putin (R) shaking hands with former US Secretary of State Henry Kissinger (L) in Moscow

Strangely, Kissinger also avoids mentioning the moral imperative to help innocent victims of aggression — as the Ukrainian people clearly are.

Instead, he invokes the risk of the West propelling Russia into China’s arms by responding too aggressively to Putin, thereby creating a formidable alliance between Moscow and Beijing. It may be news to him, but they are already allied in hostility to the West.

Kissinger, who basked in the flattery he received from the Chinese when he was the U.S. Secretary of State in the 1970s, remains awestruck by their power and wealth, and deludes himself that the Communists could be ‘co-operative’ partners.

Practitioners of Realpolitik like to belittle or even smear those who get in the way of their chess-board manoeuvrings, and Kissinger is no exception. He recently suggested that ‘the root of the problem’ in Ukraine was not, as Putin had explained loud and clear, that he wished to make Russia great again — but that the Ukrainians themselves had been at loggerheads.

No doubt they were. Plenty of countries are politically divided. But that does not give anyone else a licence to invade them.

Except, that is, in Kissinger’s mind: in 1975 he encouraged Indonesia to invade East Timor, initiating nearly a quarter of a century of massacres, torture and starvation.

Putin’s war in Ukraine has brought together the members of Nato and the EU in a way that would have seemed impossible only a year ago. It has revealed the unity and strength of the West.

It is now clear to anyone with a sense of history that Kissinger’s thinking is flawed.

While his utterances could be dismissed as the ramblings of a foolish has-been, they will be lapped up as the pronouncements of a sage by the weasels for whom the war is inconvenient, who don’t care about the Ukrainians’ right to lead a decent, peaceful life, and who would like the whole thing to go away so they can get on with their own concerns and enjoy cheap Russian gas.

He will surely go down in history as Putin’s and Xi Jinping’s most useful idiot.

Adam Zamoyski is a historian and author.