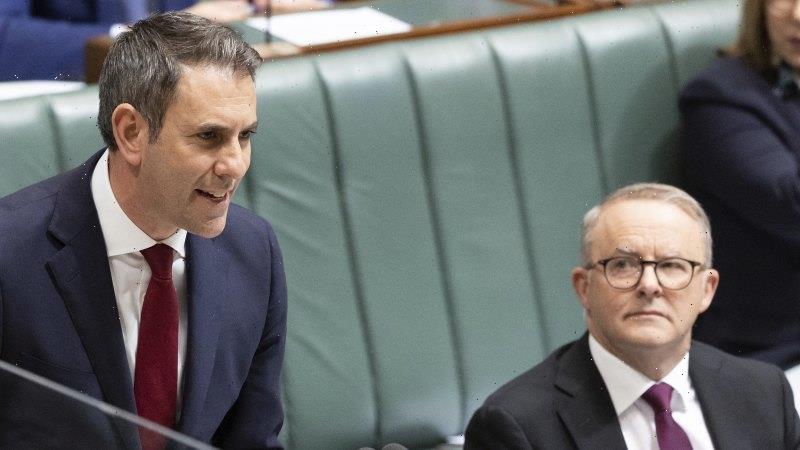 It is 121 years since Australia’s first treasurer, George Turner, was greeted with an “encouraging cheer” as he rose to deliver the inaugural federal budget.

Turner, a former Victorian premier (and Victorian minister for defence), opened his address by noting the difficulties in pulling together the first-ever fiscal blueprint for a unified nation just 10 months old. 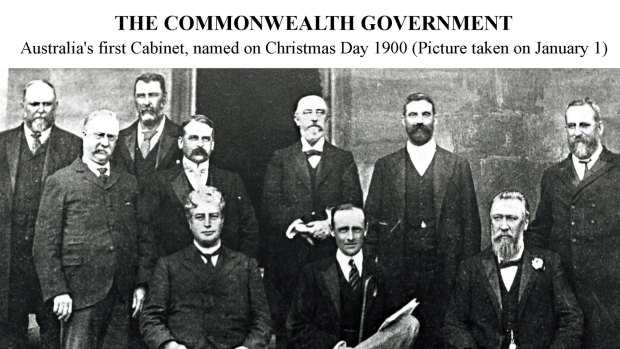 “Another grave responsibility which rests upon us at this particular time is to take the utmost care that there shall be no extravagant expenditure,” he said, in words uttered perhaps by every treasurer ever since.

Forty men have followed Turner as treasurer. On Tuesday night, the latest member of that exclusive club, Jim Chalmers, will do something none of his fellows attempted – a re-do budget.

Of the almost 120 budgets delivered since Turner’s, all have been for a single financial year. There have been budget updates, mid-year fiscal outlooks and even delayed budgets, but there have never been two budgets for the same year.

That ends next week. The Chalmers budget will officially be known as the (October) 2022-23 budget to differentiate it from its predecessor, delivered by Josh Frydenberg in late March.

Chalmers went to the May election promising a new 2022-23 budget, in what most analysts expected at the time to be little more than a bit of fiscal housekeeping.

The dramatic change in the global economic outlook since May, however, means the new budget carries much more importance, as the government uses it to highlight the evolving risks to both the nation’s bottom line but also the economy.

Chalmers said there had been plenty of discussion ahead of the election about holding an October budget rather than waiting until next year.

“It’s turned out to be the right decision,” he told this masthead.

“The pressures in energy markets have gotten worse. We’ve got natural disasters and we know more about borrowing costs, the NDIS and the three other pressure points, and so I’m pleased that we’re doing [it] in October and not waiting [until] May.” 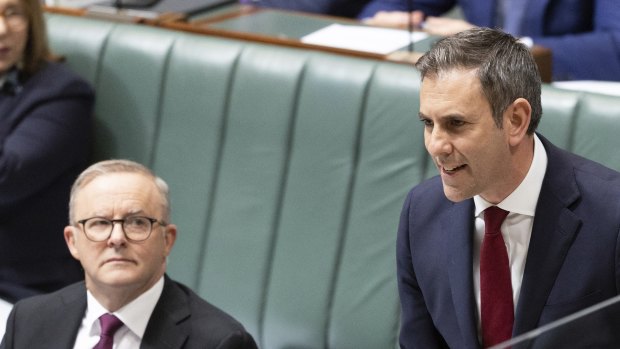 The fortunes of the Albanese government will in large part be determined by how Chalmers shapes his first budget.Credit:Alex Ellinghausen

Chalmers has described the budget as “bread and butter” or “solid and sensible”.

The events in Britain over the past month illustrate why he has gone out of his way to play down any potential political or economic pyrotechnics.

The reaction to the mini-budget released by then British chancellor Kwasi Kwarteng – a record slump in the value of the pound, the near collapse of the UK pension system, the Bank of England forced into emergency purchases of government debt – was evidence, if any was necessary, that a government surprise can have far-reaching economic ramifications.

The resignation of Prime Minister Liz Truss this week also proved, again, that budgets can have far-reaching political impacts.

Chalmers said his budget would not be anything like that presented by Kwarteng.

“It will be entirely consistent with the best advice right around the world. About lining up your fiscal and monetary policy at a time when inflation is the primary threat to people’s living standards. And so in that regard it will be precisely what markets expect,” he said.

While there may not be pyrotechnics, the disruption to the global economy of recent months will upend key economic forecasts.

In March, for instance, the government was expecting the economy of China – Australia’s single largest export market – to expand by 4.75 per cent this calendar year and then accelerate to 5.25 per cent in 2023.

Now, China’s GDP is tipped to grow by 3 per cent and then 4.5 per cent. There’s substantial doubt over those forecasts after important economic data due last week was “postponed”. The Chinese Communist Party’s national congress just happens to be meeting this week.

Closer to home, wages growth had been forecast in March to outpace inflation this financial year. Tuesday’s budget will confirm this will be delayed until 2023-24. Inflation forecasts have been changed in the past few days because of the floods that have inundated vast areas of Victoria.

The jobless rate, forecast in March to be around 3.75 per cent by mid-2024, is now expected to reach 4.5 per cent. That’s largely a function of the Reserve Bank’s tightening of monetary policy as it seeks to keep a lid on inflation.

The actions of the Reserve, and central banks around the world, is also the big swing factor in the budget. In the March budget, the RBA had the official cash rate at 0.1 per cent. It’s now at 2.6 per cent, on its way to 3.1 per cent by year’s end.

The sharpest and most synchronised tightening of global interest rates is now the single largest risk to the world economy. That risk, which could result in a global recession through 2023, is the single biggest threat to whatever Chalmers unveils on Tuesday night. 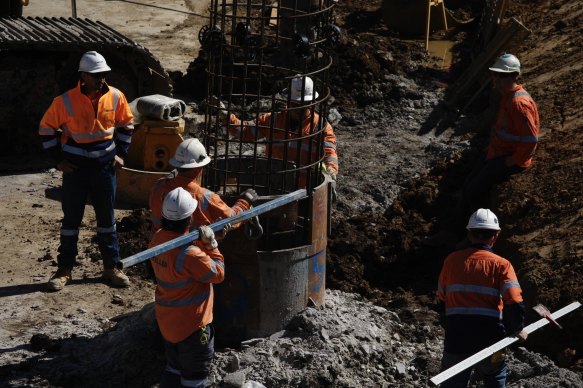 Major, and small, construction projects across the country have skyrocketed in cost over the past two years, adding to budget pressures.Credit:Dean Sewell

Another risk is the spending and revenue issues left behind by the Morrison government.

Frydenberg’s March budget was aimed at the impending election. Savings measures could be counted on a single hand, with the largest – an ill-defined deregulation agenda – based on tweaking or reducing a series of small-scale regulations.

In the two budgets before March the COVID pandemic, combined with the longevity of the previous government, meant the search for savings had all but ground to a halt as the Morrison government threw everything at protecting the economy and the health of Australians.

That means, as this masthead revealed this week, the new government has to deal with some fiscal landmines left by the previous administration.

For example, four infrastructure projects promised for south-east Melbourne around the 2019 election – including the removal of a railway level crossing – were forecast to cost $500 million.

Now, the same projects are tipped to cost $1.7 billion.

Inflation and the COVID-induced squeeze on infrastructure projects have contributed to the extraordinary blowout. The scope and true cost of the projects were also poorly understood when they were originally promised.

When the $260 million railway level crossing project, on busy Glenferrie Road in the seat of Higgins, was promised, the federal government claimed it was a “conservative” estimate. A surprised Victorian government warned the project would cost at least $100 million more. 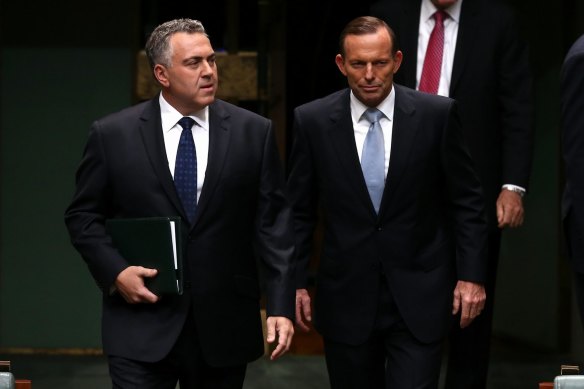 The 2014 budget, handed down by Joe Hockey, is a textbook case of the political dangers that accompany budgets.Credit:Alex Ellinghausen

A government’s first budget is pivotal to its long-term prospects. Tony Abbott’s Coalition government never recovered from its 2014 budget. While then treasurer Joe Hockey would deliver another budget, the problems – and broken promises – unleashed in his first fiscal blueprint were an indelible stain on the Abbott administration.

Both Peter Costello and Paul Keating used their initial speeches to reinforce the case for change that had been made at the elections that brought them to power.

Keating noted in his 1983 budget that the government had “sought and received a very clear mandate from the Australian people to put the country back on the path to economic prosperity and to deal with inflation and unemployment simultaneously with a spirit of consensus and fairness that would give the strategy its greatest opportunity for success”.

Wayne Swan, for whom Chalmers worked, made last-minute changes to his first budget in 2008 after returning from a meeting of the International Monetary Fund where officials were discussing the issues that would manifest themselves as the global financial crisis.

Chalmers – who returned from an IMF meeting of his own last week – has spoken to Swan, Paul Keating and Peter Costello since taking on the treasurer’s job.

Keating and Costello are still remembered for the effective way they communicated the government’s budget measures and overarching narrative. Both also succeeded in explaining major policy shifts.

Chalmers said the advice from Keating was to “play a long game” and not talk down to people.

“The advice that I find myself returning to on an almost daily basis is ‘talk up to people, don’t talk down to them’. And there’s a difference between simplifying and dumbing down,” he said.

Chalmers has made no secret that the number one priority of his first budget will be dealing with inflation. 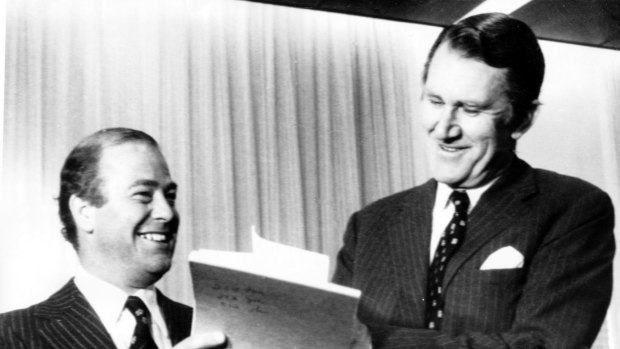 The last real first-budget assault on inflation – then running at double-digit levels – was by Liberal treasurer Phillip Lynch in 1976. He used his speech to warn of inflation’s “catastrophic impact” on hundreds of thousands of people “who had thought that savings accumulated by the thrift and industry of their working lives would help to protect their later years”.

“[They] now find the real value of those savings cut to ribbons by the great inflation which the government of that day induced and over which it so wantonly presided,” he said.

The budget is also a test for Labor’s entire economic team. Finance Minister Katy Gallagher is undertaking an audit of spending that is not endearing her to ministers keen to spend in their portfolios.

That audit has already found more than $6 billion in “zombie” measures – promised by the past government as far back as 2016 but never legislated – and ongoing programs for which not enough money has been set aside.

Chalmers said his first budget will be a team effort, arguing the group overseeing it gave him a level of “calm and confidence and trust”.

But one budget does not make a government. And within six months, Chalmers will be overseeing his second.

Asked when work will begin on the 2023-24 budget, he gives a one-word answer: “Wednesday.”