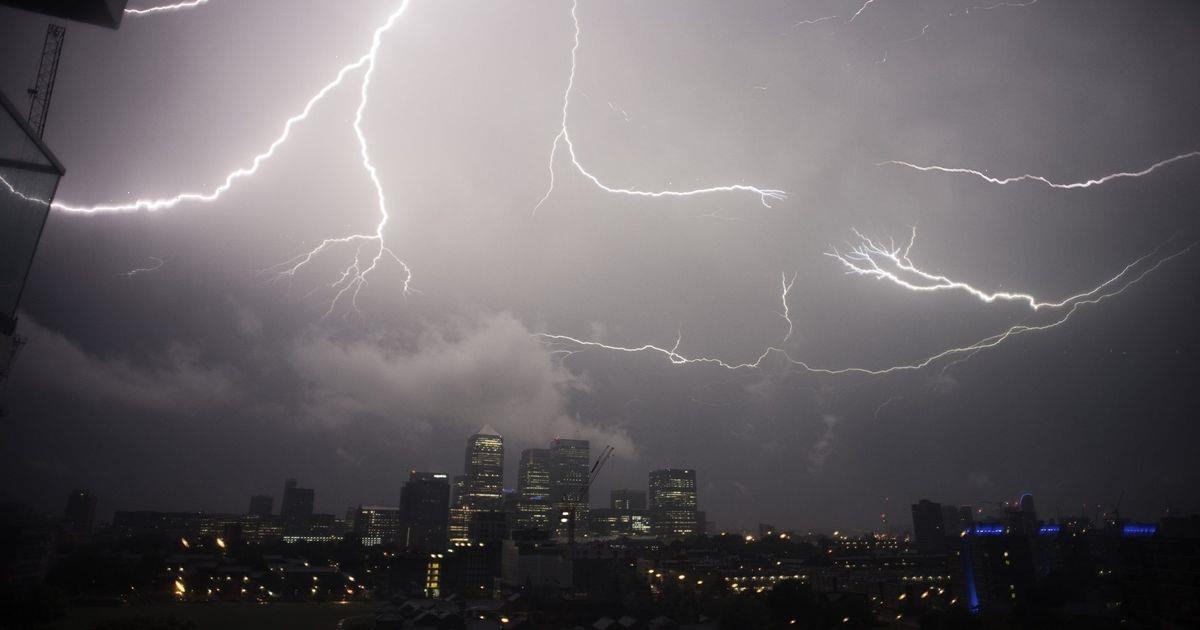 The Met Office has issued a weather warning for severe thunderstorms across the UK which is set to bring an end to the scorching heatwave.

Temperatures have already hit 40 degrees in parts of the UK for the first time ever, and is set to reach as high as 41 degrees today – with a red weather warning in place until 11.59pm on Tuesday.

But from 1pm on Wednesday, a yellow weather warning will be put in place across most of the Midlands and down to London, stretching as far as the east coast, and will remain in place until 9pm.

The Met Office has said that the thunderstorms are most likely expected between 4pm and 6pm – but there is some chance of delays and cancellations to train and bus services, as well as sudden flooding.

The record temperatures could result in violent thunderstorms across the country – but especially in North Wales tomorrow morning, as residents are being warned that flash flooding is a possibility.

The official warning reads: "Heavy showers and thunderstorms are expected to develop across central, southern and eastern parts of England on Wednesday afternoon.

"Whilst most places will see only small amounts of rain there is a chance of some isolated heavy downpours and lightning.

But for some, the weather could come much sooner – with thunder and lightning being expected to hit Devon within hours, as Cornwall has already witnessed rainfall and lightning on Tuesday morning.

Yellow weather warnings are often issued when the weather is likely to cause some low level impacts, including travel disruption, but can also be issued when it's likely to bring issues such as power cuts and flooding.

Tuesday's temperatures of up to 41 degrees have made the country hotter than Jamaica, the Maldives and Barbados.

This has caused plenty of issues, with rail users warned of delays, cancellations, and changes to train services – as well as kids being sent home early in some parts of the country to avoid the peak temperatures.

But temperatures are now expected to return closer to normal for this time of year, with cooler air being pushed across the country from the west.

Scattered showers for central London are expected anytime from 10am to 7pm on Wednesday with risks of rain from 1pm to 4pm in central parts of England.

The Met Office added: “It is likely much of the UK will see temperatures gradually decrease to average or slightly above average through the week, though occasional thundery showers are possible in the south and southwest."

The UK has experienced its warmest night on record, according to provisional Met Office figures.