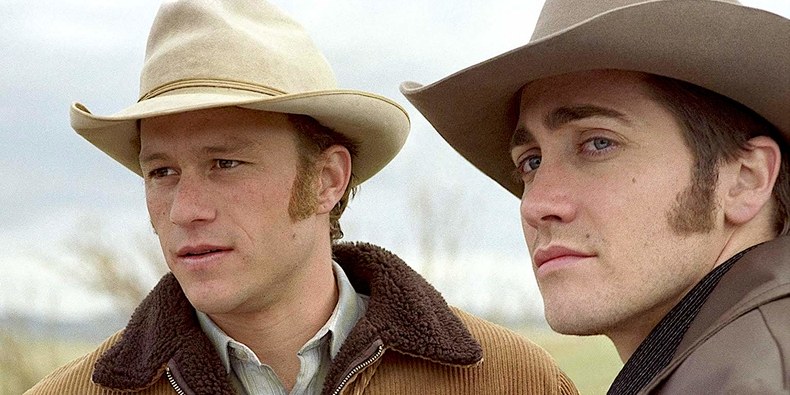 It's been 14 years since Jake Gyllenhaal and Heath Ledger costarred in Brokeback Mountain, a fraught, '60s-era romance about two cowboys who fall in love. And yet, the film still regularly pops up in the news, from last year's revelation that Brad Pitt and Leonardo DiCaprio were originally offered to star in the film, to this week's comments by Gyllenhaal about his relationship with his late costar. (Three years after the film was released, in 2008, Ledger died at just 28.)

On Thursday, the Today Show aired a new interview with Gyllenhaal in which the 38-year-old actor reminisced on the seminal film, which broke ground for queer representation on camera (to the tune of eight Oscar nominations, and three Oscar wins, no less). Gyllenhaal has previously shared that originally, he wasn't so sure that Ledger was right for the role. He wasn't alone in doubting Ledger, either; according to one of the film's screenwriters, Diana Ossana, Focus Features had worried that Ledger wasn't "macho" enough to play Ennis Del Mar. (When they began filming, and director Ang Lee suggested that he and Gyllenhaal begin lifting weights, Ledger declined, explaining that as Ennis, "I wouldn’t have time to be lifting weights. I'm kind of scrawny and young.")

Of course, Gyllenhaal, like the rest, ultimately came around—and clearly developed huge respect for Ledger in the process. "I see people who have joked with me or criticized me about lines I say in that movie—and that’s the thing I loved about Heath," Gyllenhaal told Today, going on to describe how Ledger would defend the film from homophobic comments. "He would never joke. Someone wanted to make a joke about the story or whatever, he was like, 'No. This is about love.' Like, 'That's it, man.' Like, 'No.'"

More than a decade later, Brokeback Mountain is still being recognized for its cultural and historical significance—both of which were reasons that the Library of Congress cited when adding it to the United States National Film Registry last year. "It opened tons of doors. It was crazy. It was amazing. It's defined my career in different ways," Gyllenhaal continued in the interview, before adding that the film's impact stretched much further than his own career. "[But the film] is bigger than me," he continued. "It has become not ours anymore. It's the world's."