Soup kitchen shares heartbreaking photo of girl, 4, eating her ‘one hot meal a day’ from a plastic container on the side of a street in North Dublin

A heartbreaking photograph of a four-year-old homeless girl eating her ‘one hot meal a day’ on the side of the street has sparked an outpouring of both empathy and anger.

In the shocking picture, which was taken at an Irish soup kitchen earlier this week, the little girl can be seen sitting alone on a crate as she eats the meal out of a plastic container.

The image, captured by a volunteer at the Ballymun Soup Run in North Dublin as she handed out food to families living in emergency accommodation, was shared to Twitter by the group, alongside a caption which read:

‘Our Government are to blame for this. It’s so normal that they pop down for dinner, it’s sad. No cooking facilities, what option has mammy got?’ 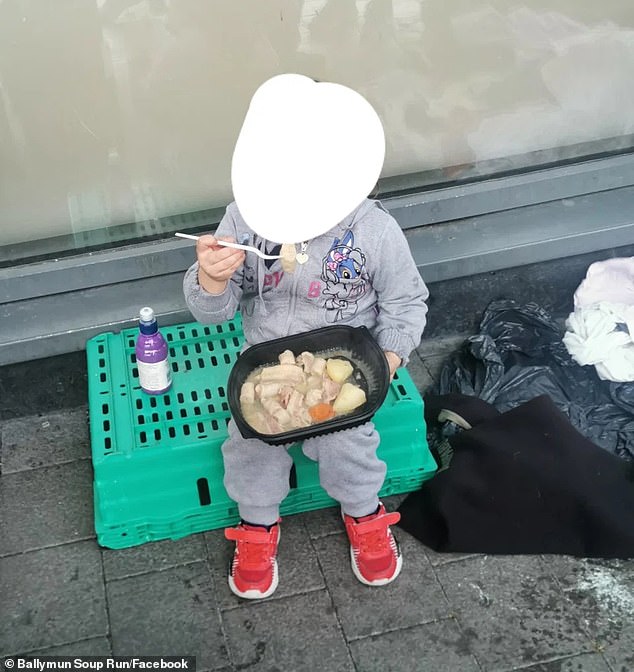 A heartbreaking photograph of a four-year-old homeless girl, from Northern Ireland, eating her ‘one hot meal a day’ on the side of the street has sparked outrage online (pictured)

The image, captured by a volunteer at the Ballymun Soup Run in North Dublin, has since gone viral on Twitter – with many branding it ‘truly heartbreaking’ (pictured)

Tony Walsh, co-founder of Feed Our Homeless, also posted the photo on social media and branded it ‘shameful and totally unacceptable’ – before slamming the Irish government over the housing crisis.

He penned: ‘No child or any individual should have to sit on the streets like this eating their dinner because they have no place to call home.’

‘Shame on our Government. When will enough be enough?’

It wasn’t long before social media users took to the comments section – with many branding the image ‘truly heartbreaking.’

‘I cannot begin to express how angry this makes me feel. A little child, or anyone, homeless and eating on the street. It is not acceptable, it never was and it never will be,’ wrote one.

A second penned: ‘The mental issues these children will suffer as a result of this up bringing will be devastating and be with them all their lives.There are so many things wrong with that image.’ 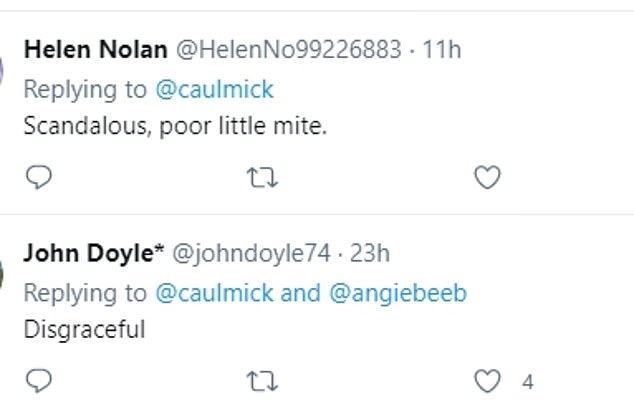 Taking to social media, one person branded the heartbreaking photograph ‘disgraceful,’ while another called it ‘scandalous’ (pictured)

Speaking to DublinLive, the volunteer who took the image said she had ‘no words’ for the heartbreaking image – adding that the government should ‘hang their heads in shame.’

According to the most recent statistics from the Department of Housing, there are 8,238 homeless people in Ireland – with 2,264 of these being children.

Taking to social media, one person penned: ‘It’s so sad when you see children on their own in all different countries trying to survive nobody to care for them or love them. I don’t know how they manage to survive or stay safe so frightening for them.’

Another branded it ”disgraceful,’ while a third added: ‘Scandalous, poor little mite.’

Elsewhere, a further commented: ‘Yes I felt so angry when I saw this a minute ago that I couldn’t even put words to the feeling, its beyond horrific!’