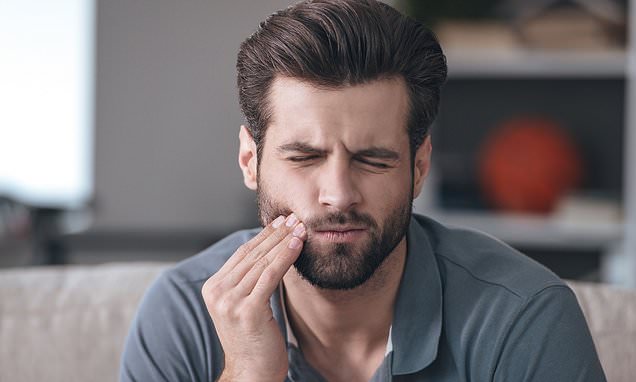 ‘You were acting like a man baby!’ Husband is ripped apart on Reddit after asking if he was an ‘a*****e’ for complaining about his TOOTHACHE during his wife’s 19-HOUR labor

They say you should ‘know your audience’, and whinging about a toothache while your wife is in labor is probably a time to keep your complaints to yourself.

A husband and wife, believed to be based in Philadelphia, Pennsylvania, who shared a memory to Reddit have finally settled a two-year debate. The couple questioned whether the man was an a**hole for moaning about tooth pain while his wife birthed their child, and the internet agreed that he was entirely in the wrong.

The mom-to-be had gone into labor ‘unexpectedly’ early. In another thread on Reddit, she revealed that she and her husband were on their way to a football game when her waters broke. 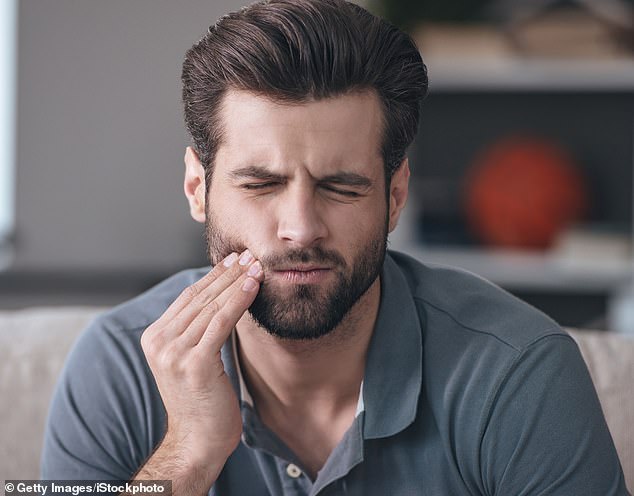 Ouch: A man was told that he was in the wrong for complaining about his toothache when his wife was giving birth to their first child (stock image) 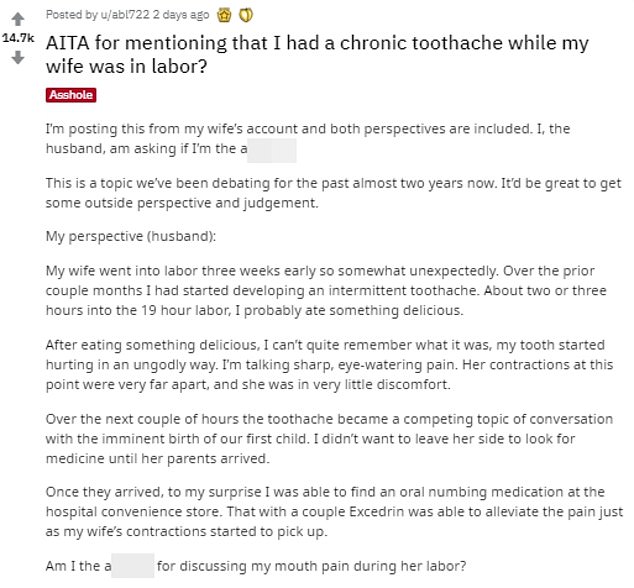 Oops: The Philadelphia-based husband and wife said that they have been talking about the man’s delivery room complaints for two years

In the post, the couple stated that they had been debating about the situation for over two years since their daughter was born – however, in the comments they did admit that ‘it’s all in good fun’ in the run-up to welcoming their second child later this year.

‘We joke about what pain he’ll have this time,’ the woman laughed.

In the original post, the woman said that her main gripe was that she had been asking her husband to get his teeth looked at for months previous.

The man, agreeing that the ‘intermittent toothache’ had been plaguing him for some time, said that the pain came back after he ate something earlier that day.

While he was experiencing ‘ungodly’ pain in the delivery room, he claims that his wife was in ‘very little discomfort’.

She agreed that she was not in terrible pain, but her issue was the timing of his complaints when she had been telling him to sort it out.

‘For a few hours while I was in the hospital getting ready to push a child out of my body he continued to complain frequently about his toothache,’ she said.

The man was instructed to go to the hospital shop and get some oral numbing gel when his parents-in-law arrived.

‘That with a couple Excedrin was able to alleviate the pain just as my wife’s contractions started to pick up,’ he said.

The woman added that the man was in no way discreet with his complaints.

‘I’d like to also mention it wasn’t just mentioned once or twice his tooth was hurting, this dominated the conversation for probably a couple hours,’ she said.

The original post was shared to the ‘Am I An A**hole’ community on Reddit, which asks people to share their verdict on whether someone was in the wrong or not.

With over 1,800 users weighing in, the man was unanimously declared the a**hole in the situation.

A tongue-in-cheek commentor asked did the man have he have to ‘push the tooth out of (his) penis’ – which was applauded by many people.

Relationship fail: Evidently, the wife had the last word as all commentors settled the debate and declared the man was in the wrong