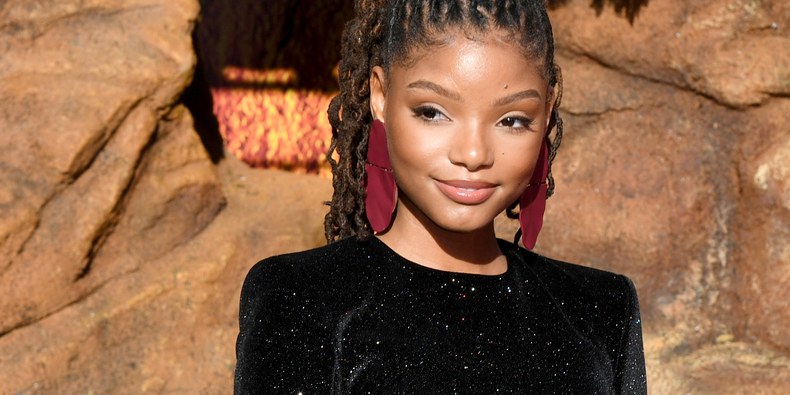 Halle Bailey, AKA Ariel in Disney's upcoming live-action remake of The Little Mermaid, wants to be were the people are, not where the trolls are. When the actress (of Grown-ish) and singer (one half of Chloe X Halle) was first announced as the new face of the famous mermaid, a small backlash ensued online. The hashtag #NotMyAriel was used by Little Mermaid fans who thought Bailey was not the right choice to play the iconic redhead. (For what it's worth, the most vocal #NotMyAriel tweeters turned out to be fake.)

Like a true Disney princess, though, Bailey isn't paying attention to the hate, instead focusing on the amazing opportunity of being involved in the project. At the Power of Young Hollywood event hosted by Variety, she told the outlet, ""I feel like I'm dreaming…And I'm just grateful. I don't pay attention to the negativity; I just feel like this role is something bigger than me. And it's going to be beautiful. I'm just so excited to be a part of it," per Elle.

This isn't the first time she's been given the chance of a lifetime. When she and her older sister Chloe were both teenagers, they were signed to Beyoncé's record label and appeared in her visual album Lemonade. Now that Bey has turned her part in Disney's The Lion King into an album of its own, we can only imagine that Bailey will have her own Mermaid-adjacent projects.

As for casting reactions that actually matter, Chloe Bailey revealed at the same event that she was overjoyed for her sister when the family got the news. She told People, “Heck yeah! I was more than proud. I was screaming and crying. [Halle] worked so hard.” Good to see she's more supportive than Ariel's slightly superficial sisters.

Charlize Theron at the "2 Days in the Valley" film premiere on September 20, 1996 at Mann Village Theatre in Westwood, California. Photo courtesy of Getty Images.