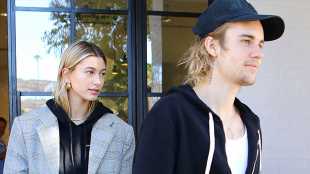 Hailey Baldwin has ‘Beliebers’ excited that new Justin Bieber music is coming very soon! The model shared a sultry photo of her husband in the recording studio, Sept. 18, as she supported him outside the booth.

New Justin Bieber music may be closer than expected! Hailey Baldwin shared a dark snap of her hubby inside the recording booth on Wednesday night while she observed from afar with their two cats, Sushi and Tuna. “Studio babies,” she captioned the photo on her Instagram Stories, referencing herself and the two animals.

The photo features Justin sitting on a stool in an empty recording studio as a light shined down on him. He sat behind a music stand while his wife proudly looked on. The singer appeared to be wearing baggy pants and a red t-shirt.

Hailey’s snap came weeks after Justin said on Twitter that he has “some good music coming” at the end of July. Before that, JB teased that a new album is coming when he joined friend, Ariana Grande onstage at Coachella in April. Justin has been open about his plans to release new music, as he continues to deal with his mental health struggles.

Justin took to Instagram in early September to open up about the negative effects that fame has had on him. In a lengthy note, JB confessed to “heavy drug” use at age 19, among other dark experiences. However, he admitted that because of his loved ones, he’s now navigating his “best season of life,” his marriage to Hailey.

The model’s latest update of JB in the studio also came on the same day her husband was spotted out in LA with an IV attached to his forearm. Justin, who was accompanied by his security in new photos from the outing, appeared to be carrying a black bag that held the IV drip. It’s unclear why the singer required an IV. HollywoodLife reached out to a representative for Justin, and did not receive an immediate reply.