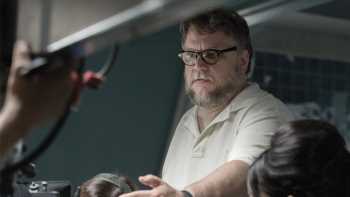 Is Guillermo del Toro ever not in pre-production? The Oscar-winning director-writer-producer has seemingly lived in a constant state of development for the entirety of his nearly three-decade career, with his boundless ambition being just as essential to his career as his inimitable eye for creature design, his reservoirs of genre film knowledge, and his ability to balance grotesque horror with Catholic mythology and righteous humanism. After all, it’s not every director whose list of unrealized projects is extensive enough to have its own Wikipedia page.

But take a closer look at how he’s spent the past several years, and it’s striking how much more systematic del Toro has become in bringing all of his fantasies to reality. On the same week he finally gets a star on the Hollywood Walk of Fame, del Toro also has the premiere of “Scary Stories to Tell in the Dark,” a CBS/Entertainment One adaptation of Alvin Schwartz’s kiddie horror tome that he initially developed as a project to direct himself before handing off helming duties to Andre Øvredal. After that comes Scott Cooper’s supernatural thriller “Antlers,” which del Toro produced through his newly minted development deal with Fox Searchlight. His animated Netflix series, “Trollhunters,” recently bowed its third and final season. And, not to mention, he’s also in pre-production for two projects that he will direct: An adaptation of William Lindsay Gresham’s classic noir novel “Nightmare Alley,” which starts shooting in January and will be distributed through Fox Searchlight; and his first stop-motion feature, a reimagining of “Pinocchio,” also set up through Netflix.

For del Toro, who sometimes butted up against the limitations of studio filmmaking earlier in his career, he’s finally arrived at a point where his reputation speaks for itself.

“I execute my craft exactly in the same way through both [Netflix and Fox Searchlight],” he says. “And the thing I have with both is a very clear relationship: they know what I do. At this point I’ve been directing and producing for more than a quarter of a century, so you become like a certain type of tree. If you come to an orange tree, you’re not going to get an apple. I’m very clear with what I want.”

While del Toro has been honing his style as a director since his 1993 feature debut, “Cronos,” he’s more recently developed into a producer of impressive taste and foresight. From his earliest production projects, del Toro has been proven a keen judge for scouting out young filmmakers, helping give J.A. Bayona and Andy Muschietti their first worldwide platforms. And his years on the other side of the balance sheet certainly helped teach him what makes for a constructive producer: after a difficult experience working under the Weinstein brothers on his English-language debut, “Mimic,” del Toro achieved his first major artistic breakthrough thanks to producer Pedro Almodóvar on “The Devil’s Backbone.”

“Pedro was the best producer I ever had,” del Toro says. “He basically said, ‘I’m here if you need me, and I’m not here if you don’t.’ And every time he would give a suggestion he would always say, ‘But it’s your decision.’ So that’s the way I try to operate with Andre or Scott Cooper or Bayona. Now and then I will literally say, ‘I’m falling on my knees, and I’m begging you to consider this, but’ — and I always add the ‘but’ — ‘the name above the title is yours, not mine.’”

For “Scary Stories” director Øvredal, who first reached out to del Toro on Twitter after he praised Øvredal’s previous film, “The Autopsy of Jane Doe,” those boundaries were bluntly defined from the start.

“Obviously he worked on this script to direct it himself, so he comes into it with a vision of his own,” Øvredal says. “But the wonderful part was that the moment they hired me to direct, the first thing he told me was, ‘Now this is your film. Do not make a Guillermo del Toro movie, make your movie.’”

Where del Toro exerted the most influence, Øvredal found, was in post-production, taking a hands-on role in finely tuning the final cut.

“He was a master at focusing a movie in the editing,” Øvredal says. “I did my director’s cut and I showed it to him, and he said, ‘That’s great, now let’s sit down and I’ll show you how to cut 20 minutes off.’ And he did! He sat down with the editor and myself for two days and I just let him snip off stuff. He took out a couple scenes that I was actually in love with, but when I saw it at the end, every choice was correct.”

There’s something about that process that doesn’t jibe with del Toro’s reputation as a meticulous planner and designer, the kind of director who is probably already sketching out ideas for creatures, shots and sets for films that he won’t get around to shooting for another 10 years. If anyone understands what it’s like to fall in love with a shot or an image, you’d think it would be Guillermo del Toro. But restraint, and a willingness to kill his darlings, have been just as essential to his work as his justly lauded imagination.

“I remember when I did ‘Cronos,’” del Toro says. “Back then when you hired a dolly or a crane it was a huge deal to rent it, and I was a first-time filmmaker. So my cinematographer and I planned this beautiful shot with a crane on one of our main sets. We basically designed the whole set around that shot. And then that was the first shot I took out in post. My cinematographer said, ‘It was the best shot of the movie!’ and I said ‘No, it was the one that stopped the rhythm.’

“When Alejandro [Iñárritu] and Alfonso [Cuarón] and I go to each other’s editing rooms, that’s basically the tenor of it. We have discussions and say, ‘This shot, this shot, and that shot have to go.’ And somebody always says, ‘But that’s a hundred-thousand-dollar shot, plus all the vfx and the set construction, and ….’ It doesn’t matter. No one [watching the movie] knows what went on behind the scenes, artistically or economically.”

But of course, for all his success as a producer, the place most fans are most eager to see del Toro is back in the director’s chair. For his first feature since winning two Oscars for “The Shape of Water,” del Toro has lined up “Nightmare Alley,” a dark, deeply cynical tale of a dissolute carnival mentalist. Though it was already made into a film starring Tyrone Power in 1947, del Toro looks to hew closer to the book, which doesn’t lack for contemporary relevance.

“Like most noir literature [of its era], in the book there was sort of a disillusionment with capitalism, and a disillusionment with quote-unquote civilization of the urban environment,” he says. “I thought it was very sexually charged, and really poignant about America, with a brilliant intuitive connection between carnival mentalism and the birth of psychology in America.”

For “Pinocchio,” on the other hand, del Toro aims to do quite the opposite, intentionally straying from both Carlo Collodi’s 19th century source novel and the more famous Disney adaptation, and setting his version in Italy during the rise of fascism. At first blush, “Pinocchio” — which along with “Frankenstein” has long been one of del Toro’s white whale projects — seems an odd fit for that treatment, and for del Toro himself. The director has long advocated for a more anarchic, chthonian, liberated approach to fairy-tale storytelling, and “Pinocchio” is nothing if not proscriptive and borderline authoritarian.

Del Toro agrees, and implies that that’s where his interpretation will differ. “To me, ‘Pinocchio,’ very much like ‘Frankenstein,’ is a blank canvas in which learning the curve of what the world is and what being human is are very attractive to do as a story. I’m very attracted to it because, thematically — and I don’t want to spoil what the movie’s about — it’s about something that is in all of my movies, which is choice. That’s a theme that is very dear to my heart. I think [earlier versions of] the story, and Collodi’s in particular, are very repressive. It’s essentially a very brutalist fable about what a sin disobedience is. And I think disobedience is the beginning of the will, and the beginning of choice. … I think there’s something that’s very attractive about seeing disobedience as a virtue, or as the beginning of a virtue.”

Considering his work as an executive producer on “Kung Fu Panda 2” and a producer on “The Book of Life,” it’s surprising that it’s taken del Toro this long to finally attempt to direct a proper animated feature. After all, as he notes, he’s been dabbling in stop-motion ever since he was a kid with a Super 8 camera, and he’s working to set up animation scholarships, as well as a stop-motion resource center in his native Guadalajara. As he explains: “I believe stop-motion is one of the few types of film where a person with two or three friends can actually make a feature with very little resources. There’s a freedom that comes with that.”

But now that he’s up and running, del Toro says he hopes to start creating a body of animated work that will appeal to audiences of every age, growing up along with them. Aimed at younger audiences, “Trollhunters” was in many respects the first iteration of that, and he recalls how he pitched the series to Netflix: “I said I really want to create a show that brings to the foreground good human emotions: Nobility, friendship … love is very interesting to see in movies, but I think friendship on film is such a beautiful thing. Whether it was ‘Leave It to Beaver’ or ‘Bonanza,’ when I was a kid I wanted to hang out with those people, and see them every week. In the same way that I think the Marvel movies basically are the comic books of our era, with ‘Trollhunters’ I wanted to create those sorts of characters that you’d want to hang out with.”

With that in mind, considering his role as an early auteur of comic book adaptations including “Blade II” and “Hellboy,” would del Toro ever consider stepping back into that machine?

“At each moment of your life, you do the things that attract you. And back when I was doing ‘Hellboy’ and ‘Blade,’ it was a little bit counter to what was being made,” he says. “But as you grow older, your concerns as a filmmaker change. I only direct the things that I’m incredibly avid to see, and that would not exist if I didn’t tackle it. I always ask myself, ‘would this movie exist if I didn’t make it?’ And if the answer is yes, I don’t do it.”