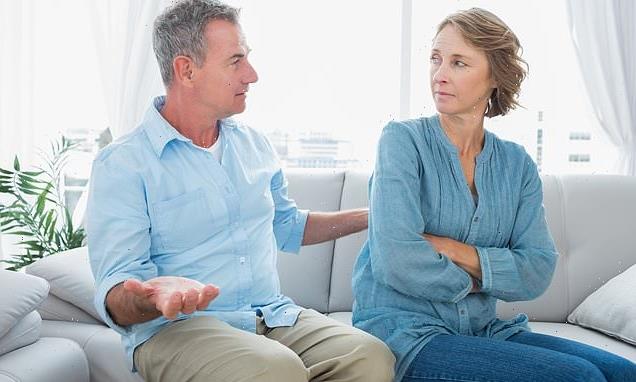 Grandmother is left torn after her husband refuses to let her grandson stay over on weeknights because it disturbs his sleep before work – so, who do YOU think is in the right?

A mother has asked for advice after feeling torn between her son and grandson and her husband in a row over staying at their home.

The anonymous British mother explained on the parenting forum Mumsnet that her son, 21, who still lives at home and is separated from the mother of his child, has his son to visit every other weekend and one week night.

However, her husband – who is not her son’s biological father – has to wake up early for work and doesn’t agree with the arrangement.

She said that she feels bad about telling her son he can’t have his son over, but  doesn’t know whether she’s right or if her husband’s feelings should take priority.

Mumsnet users were split over the issue, with many saying the son should find his own place to live and others saying he should be able to have his son to stay. 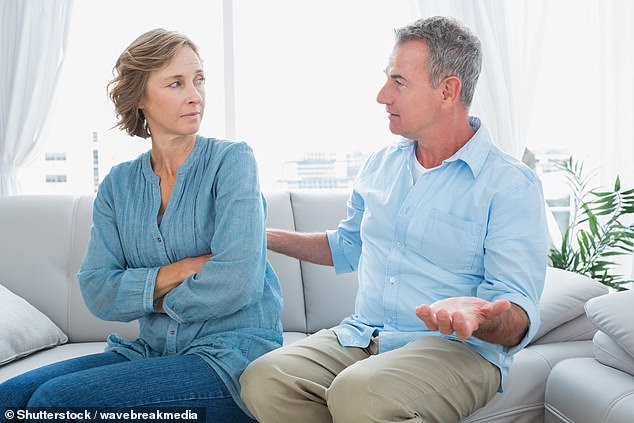 A British mother revealed on the parenting forum mumsnet that her husband, who was not her son’s biological father, didn’t want her grandson to stay with them two nights a week because it would disturbed his sleep (stock image)

‘Last year my son and his now ex had a baby. I love my grandson to death and as far as I’m concerned my son can have him here anytime he wants or needs,’ the mother started.

But she went on to reveal her husband had not taken kindly to the idea of the baby staying over.

‘He said it’s not practical to have grandson overnight during the week as it disturbs his sleep and he has to get up early for work,’ she said.

She added that the husband believes that nobody is taking his feeings into consideration, and thinks that her son should get his own place. 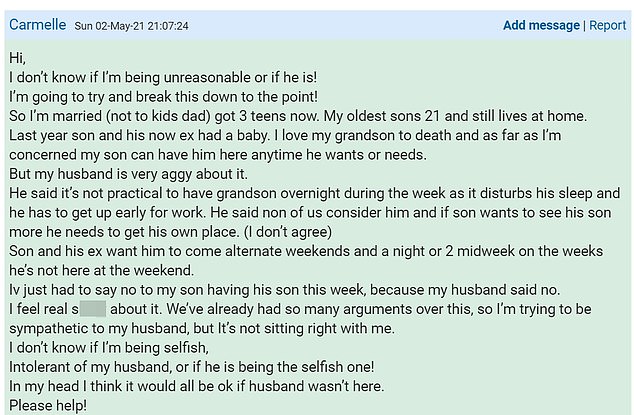 The anonymous mother said she didn’t know whether she should side with her husband, or disregard his opinion and let the son stay

‘I’ve just had to say no to my son having his son this week, because my husband said no,’ the mother revealed.

‘I feel real s***** about it. We’ve already had so many arguments over this, so I’m trying to be sympathetic to my husband, but It’s not sitting right with me,’ she added.

She said she didn’t know whether she was being ‘selfish,’ and disregarding her husband’s wishes, or whether her husband is in the wrong,

‘In my head I think it would all be ok if husband wasn’t here. Please help,’ she ominously added.

Mumsnet users were split over the issue, and could not come to an agreement on who was right.

Many sided with the husband, saying the son should get his own place if he wanted his baby around.

‘I think it’s time your son started looking for his own place,’ one said.

‘Yeah your son should look for his own place. I wouldn’t be thrilled about it if I were your husband,’ another added.

Others felt the son should be able to have his baby over in the house he shared with his mother, her husband and siblings

‘Your son needs to learn to be a father to his child rather than expecting his Ma to enable him. I wouldn’t want a baby or toddler round regularly, been there, done that,’ another appointed out.

‘Your son needs to get his own place and start being a man,’ one wrote.

Others said the son should be able to look after his baby at his mother’s home, if he can’t afford to move out.

‘Totally disagree with all the posters above. My children’s children will always be welcome in my home,’ one said.

‘It’s not that easy at 21 to just move out. Better to stay out and save for a mortgage,’ they added.

‘My husband would never complain about any grandchildren staying over ,but that’s because they are his children. I think your husband is totally unreasonable,’ they went on.

‘Can your son afford a decent place to live? I would want my children and grandchildren to be welcome in my home, esp if one of my sons became a father at such a young age,’ one said.

‘I would never ask my son to move out. I chose to have him and will help and support him in any way I can,’ another parent said.

‘Just because he is 21 does not mean he is ready to move out, and it seems you’ve said he’s not in a position to either,’ they added.

Other parents said they could never imagine telling their children to leave the nest if they were caring for a baby.

‘Your husband is moaning about 2 nights a month? I’d tell him to s*** up the big old whinge bag,’ they said.

‘I think I’d take your son’s side any day. Helping him develop a strong bond with his child is the best thing you can do for your grandchild,’ another wrote.

’21 is not an unreasonable age to still be living at home these days. I’d far rather my grandchild was spending time at mine than in a bedsit or a dodgy flat share,’ another agreed.