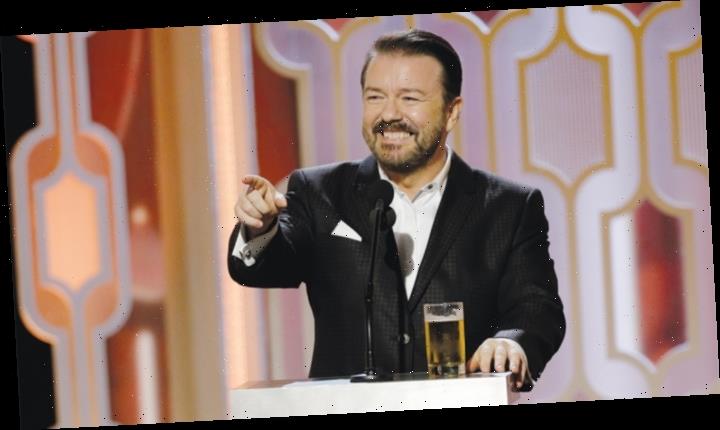 It’s a bit ironic that it’s the Golden Globes that may finally save us from an ultimately misguided trend of host-less awards shows. During its first 66 years, the Globes went without a host in all but one year (1995, when John Larroquette and Janine Turner emceed the show).

But then came Ricky Gervais. In 2010, the Globes changed the game by bringing in the British comedian to add a little edge to what the Hollywood Foreign Press Assn. (HFPA) calls “Hollywood’s party of the year” (no joke, they’ve copyrighted that slogan). Gervais was rude, insulting, boorish — and hilarious, as an awards host that year. Although it seemed a bit counterintuitive for an evening devoted to Hollywood stars congratulating themselves, Gervais was brought back for the 2011, 2012 and 2016 shows — and will once again host the televised festivities in 2020.

Gervais pulled off what stodgy, old-skewing awards shows had been struggling to do for years: Find a way to attract a young crowd and lead the pop culture zeitgeist. It’s what led the Oscars to try and shake things up, with very mixed results (Seth MacFarlane; James Franco and Anne Hathaway).

In the years following Gervais, the Globes got it right again, as Tina Fey and Amy Poehler took over hosting duties in 2013, 2014 and 2015. After the return to Gervais in 2016, the Globes went a touch more traditional with NBC’s late night hosts Jimmy Fallon and Seth Meyers, in 2017 and 2018, respectively.

The HFPA, producers Dick Clark Prods. and NBC got a bit creative again with their 2019 telecast. After generating comedic chemistry as they presented together at the 2018 Primetime Emmys, Andy Samberg and Sandra Oh hosted the night (made even more historic by Oh’s win for TV drama actress).

Pairing Samberg and Oh was inspired, and served as a stark contrast to the hosting disaster that the Academy Awards faced earlier this year. With Jimmy Kimmel opting not to return to the show, despite positive marks for his hosting gigs, the Academy and ABC struggled to find the right host. They finally settled on Kevin Hart, who seemed like a fine choice — until he refused to apologize for past offensive social media posts, and stubbornly quit instead.

Without Hart, the Academy had no backup. They had already struggled to find their Goldilocks — the just-right pick that combines an A-list star with hosting chops who had a clear schedule and is willing to step into the hornet’s nest of social-media haters.
Awards show host has become a mostly thankless job, especially for the biggest shows. That’s why the Oscars ultimately went host-less this year, and succeeded thanks to an extenuating circumstance: A year that happened to include several crowd-pleasing nominees (such as “Bohemian Rhapsody,” which enabled the telecast to open with a performance by Queen featuring Adam Lambert).

That’s a one-time luck of the draw. When the Emmy Awards pursued a similar no-host approach this year, the idea was comparable: focus on the high-profile nominees such as “Game of Thrones,” which happened to also be ending its series run. Yet without a host, the Emmys felt a bit rudderless — and the reviews expressed mostly boredom.

Before the Emmys, the no-host trend seemed to have taken hold — but post-Emmys, the conversation switched back to how a master of ceremonies can still help power things along. Two other shows that in the past mostly eschewed hosts, the Grammy Awards and the SAG Awards, now also include them in the mix.

The Golden Globes will air the first large awards show of the new year, so the HFPA and NBC have an opportunity to once again showcase how these kinds of telecasts can benefit from an anchor. Gervais has become a more polarizing figure in comedy recently, but he knows from experience how to make an awards show work.

Gervais will also be tasked this time with introducing another awards hosting veteran, Ellen DeGeneres, who has been tapped to receive the second-ever Carol Burnett Award during the telecast.

For the Globes, at least, the gold standard in hosting remains both Gervais and Poehler/Fey. “We’ve called up Amy and Tina’s monologue and Ricky Gervais more than once, just to watch,” one TV writer told me earlier this year. “They hold up and they’re funny! So anything that adds original comedy to an otherwise not-very-exciting seven hours of television isn’t bad.”