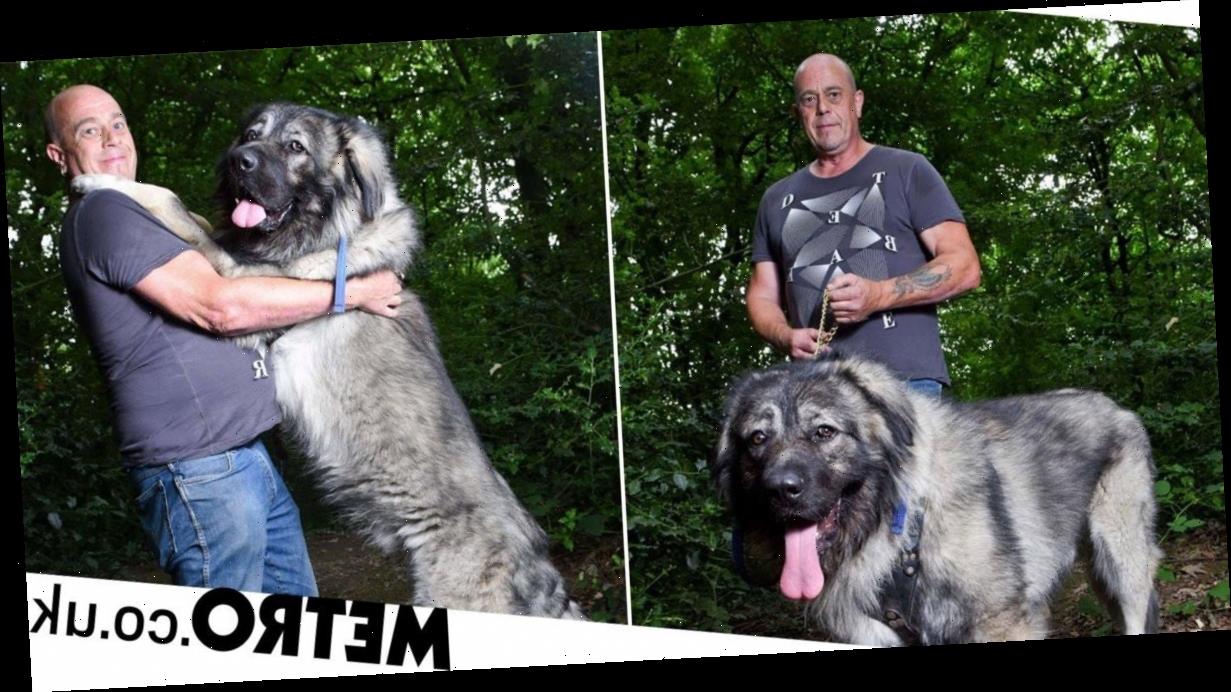 Meet Marley the Russian bear dog – he weighs 14st and stands at 6ft 5inches but is still growing.

The two-year-old pooch lives with his owners Nigel Carver, 63, and partner, Linda Bowley, 60, in a small cottage in Ilkeston, Derbyshire.

He’s already taller than both of them when he stands on his hind legs and needs needs six mile walks per day.

They have estimated that in just 12 months, they’ve walked the distance between Land’s End to John O’Groats three times.

Marley’s daily diet consists of raw mince meat, boiled chicken, fish with vegetables as well as dog biscuits – which costs the couple over £120 per month.

Nigel, a builder, said: ‘Marley is taller than me when he’s stood on his hind legs and I’m 6ft 2inches.

‘He’s huge and he towers over my head when he’s on my shoulders.

‘He won’t be fully grown until he’s three or four years old but is likely to gain more muscle weight so could eventually weigh around 16st.

‘When he was a puppy he would have massive growth spurts in the night and we’d wake up to a bigger dog every day.’

The breed is used to hunt wolves in Russia but is very unusual here so Marley gets lots of stares when he’s out and about.

Nigel added: ‘He gets so much attention when he’s out on his walk as it’s not every day that you see a dog of this size.

‘It’s rare in the UK to see a Russian bear dog but in Russia it’s their main breed of dog.

‘We walk him for around 168 miles per month, he needs a lot of exercise as he’s such a large, active dog.’

Marley has gone viral online several times due to his tall stature.

Nigel added: ‘I enjoy taking photos of Marley that illustrate his huge size.

‘I haven’t yet posed him up with a short person but I’m hoping to do that soon.

‘Whenever I post an image of Marley online he gets thousands of likes and shares as people are fascinated by him.’

He is covered in thick fluffy hair and needs constant brushing due to his excessive malting.

Nigel said: ‘We fill half a bin bag of his hair per day he malts that much.

‘We could do with attaching a vacuum to him.

‘But he’s worth all the effort it takes to care for him, we feed him a varied diet from a local butchers.