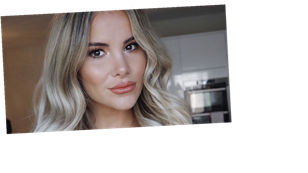 Georgia Kousoulou and Tommy Mallet are really progressing with their house renovations and have shared the latest update.

The TOWIE power couple have been documenting each stage on their home account with Georgia sharing a look at what will be her dressing room as well as how they've changed the layout of upstairs.

She explained that they decided to reduce the size of their main bathroom to make the next room bigger, giving her more space for the walk-in wardrobe space.

"So we have made the main bathroom upstairs smaller to make this room slightly bigger which will be my dressing room," she wrote alongside a snap of the structure being installed.

The reality stars had also made headway with some of their windows, with Georgia posting a before and after of the designs which transformed from brown to black.

"New window day .. I just love black windows & doors @homehubgroup," she said of the new look, and also shared that they were planning on getting bifold doors downstairs to match.

Tommy, 28, bought Georgia, 29, the house and told new magazine that although they "never argue" moving house is causing them "a lot of stress".

The duo who recently took part in the ten-year anniversary celebration of the ITVBe show, are planning on moving in soon but not before the renovations are completed.

They've made some big design changes to the house already including building an extension to make a new bigger kitchen and are turning the current kitchen into two new rooms.

Posting another picture Georgia shared more construction images from upstairs: "Swipe for before .. so we have took out the chimney so we made the bedroom door to the left so it’s inline with the hallway. This is the left of the stairs [sic] ."

Georgia also showed off the results after they ripped out a bathroom, as well as a bedroom: "Swipe to remove bathroom…"

Previously the bathroom was all one shade of beige marble tiles from the floor to the bath, with white units that had all been ripped out to make space for their chosen design.

The reality star shared some ideas of what she wanted it to look like, going for a mainly monochrome black and white style.

Georgia posted plans of their kitchen, sharing before and after snaps and what they were planning on doing with the renovation.

"Current kitchen space .. swipe to compare the new plan! As you can see the current kitchen is beautiful & very well done! The only problem for me was the space .. I like an open plan space & this kitchen is currently long and not sociable.

"So we are moving the utility & bathroom where the kitchen is now .. than nocking 2 Walls down.. Extending out to than make a more open plan light area [sic] ."

For the new kitchen, Georgia shared the mocked-up plans which currently follows a light grey and white colour scheme with a large island in the centre that has a hob and a breakfast bar with chairs.