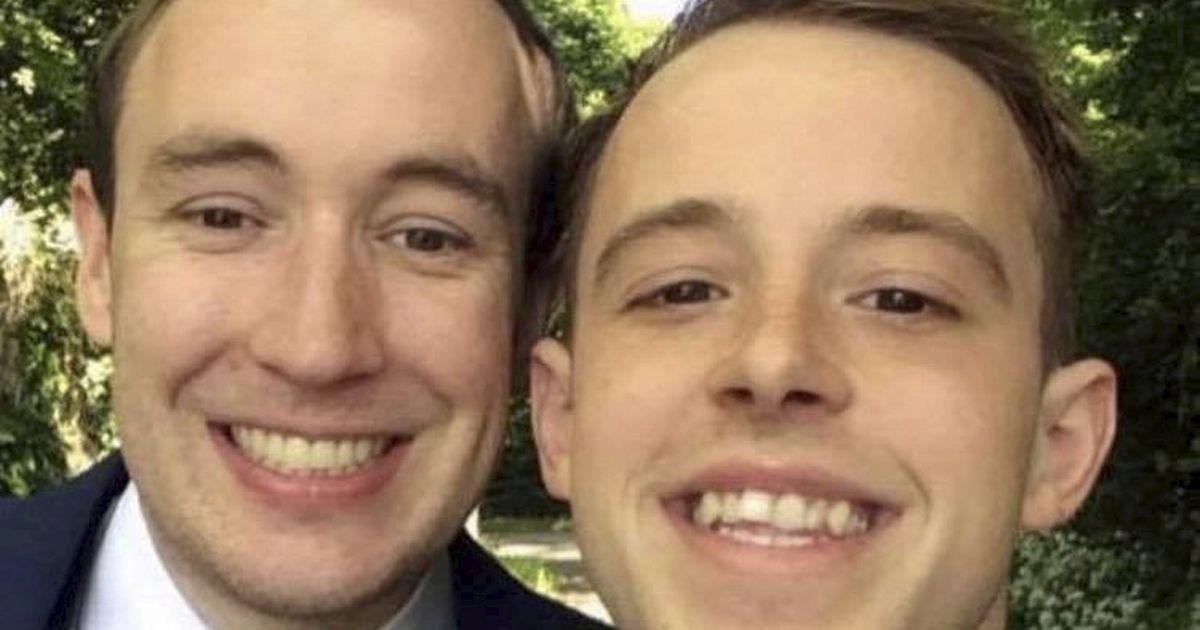 A gay couple were sent a homophobic letter warning them they should have their wedding far away from their village.

Callum Hodge and Ashley Jenkins announced their engagement and received nothing but love and support from friends and family.

They planned to hold their wedding reception in their home village of Norton Malreward in Somerset which has a population of just 246.

But Callum's mum was devastated when an anonymous note dropped through her letterbox claiming it was the "consensus of the village" the party should be held somewhere else.

The homophobic author said Callum "should be ashamed of himself for putting his grandparents through this".

It said he would no longer "be welcome in heaven" and said his mum Janie needed to lead him down a "new path".

Police say they are investigating the letter as potential hate mail.

It was four months before the wedding reception held at Callum's parents' private barn conversion that Janie – a post lady – received a letter.

It attacked the plans to hold the reception in the village after the couple tied the knot in nearby Bristol.

Janie didn't tell a soul about the letter and kept it to herself until after the wedding in July – which professional dog walker Callum says was everything he dreamt it'd be.

But she says she spent the lead up to the big day worried sick villagers were plotting a riot or protest that would spoil what's supposed to be the best day of her son's life.

"I was absolutely gobsmacked and just devastated to read it", said Janie, 59.

"It was addressed to me and said it was the consensus of the village that if the wedding was going to happen then it should do so far, far away from the village.

"It said I should show Callum down a new path.

"I didn't want to speak to anyone or acknowledge anyone in the village because I thought everyone was out to get us.

"It is vile. It made me feel completely unwelcome in the village. The letter is so cruel and it made me very upset.

"I was so worried something would happen on the wedding day, like a protest or something. This person tried to ruin our day and it is so hateful."

Mum-of-four Janie reported the letter to Avon and Somerset Police on the same day it arrived at her house.

The letter said: "Callum should be ashamed of himself for putting his grandparents through this. He won't go to heaven.

"You need to lead him down a new path in life. The wedding should take place far, far away from the village. This is the consensus of the village."

It is now being treated as a hate crime and a criminal investigation is still underway, but police are still unsure who is responsible for sending the letter.

Janie kept the letter to herself out of fear it would ruin the day for Callum if he found out about it before the ceremony.

She broke the news to him about the letter a week after the "wonderful" family day went ahead without a hitch.

He says felt angry and upset and has hit back at the "pathetic low life" who sent the homophobic letter to his mum.

Callum, who lives with dressage rider, Ashley, 27, in Evenlode, Gloucestershire, said: "I found it really upsetting. I lived in that village for 29 years.

"It is evil. We are free to do whatever we want on our private land. It's a homophobic attack.

"I feel pity for that person. Why do they feel as though they have a right to do that, to try to ruin our day. I was more angry at how it made my mum feel.

"She was made to feel completely unwelcome in the community. She felt like an outcast.

"To think that we probably have met that person makes me sad. They are pathetic and made up lies to attack us.

"But it didn't spoil anything. We had the most amazing day and the room was filled with so much love."

Callum married the love of his life, Ashley, on July 13 which just so happened to be Bristol Gay Pride day.

They wed at Bristol Registry Office before heading off to Callum's parents house for the reception and after party.

The pair met ten years ago during a night out in Bristol and have only had eyes for one another ever since.

Their wedding day was "perfect", said Callum, who has been inundated with support from villagers in Norton Malreward.

He took to Facebook to vent his frustration at the letter, which had been typed on a computer and posted through his parents' front door.

Off the back of that people rallied around the family and this proved to them that it wasn't the consensus of the village for the wedding to be banished and confirmed their suspicions the letter was penned by one "hateful" individual.