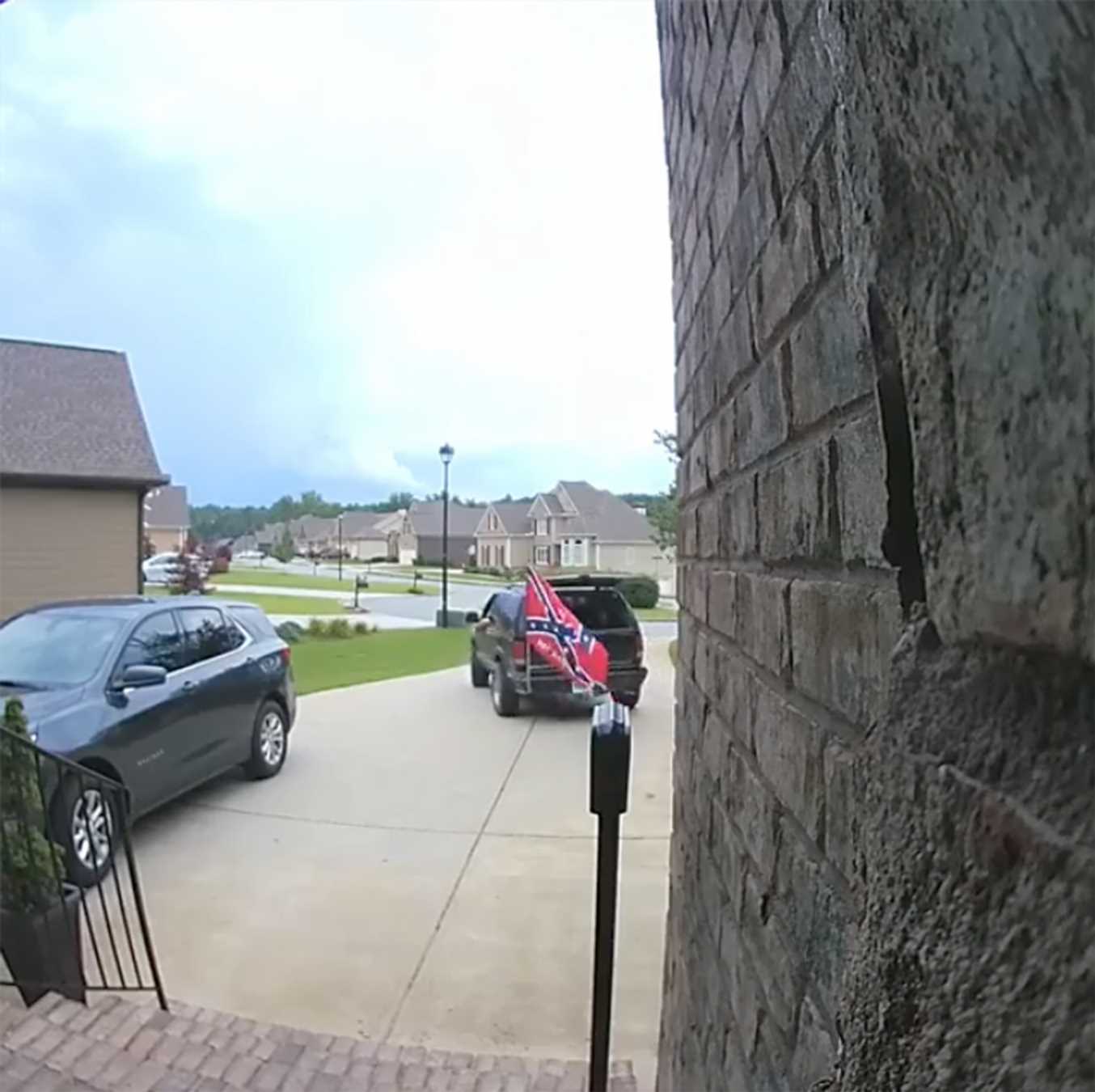 Footage of a black Georgia couple turning away a white contractor waving a large Confederate flag from his SUV has gone viral, and the couple said they hope the incident can serve as an educational moment.

Allison and Zeke Brown never suspected anything offensive about the contractor when they arranged to have him replace the brakes on their golf cart on Saturday, Yahoo reported.

But when the man, identified only as Michael, arrived at their Atlanta home with the flag on his truck, they knew they had to speak up.

“Hi, you know what, I do apologize, I know you’ve come from a very long way, but we’re going to use someone else,” Allison, 40, is heard saying in the Facebook video, originally posted on Sunday, before Zeke chimed in: “She’s upset with the flag.”

“No, I’m beyond upset with the flag,” Allison added.

She later told Yahoo: “I didn’t want to be the ‘angry black woman’ but I wanted him to learn and feel that bottom-line loss. You don’t go to Germany and wave the Nazi flag. It’s the same thing.”

“The flag was absurd — I had to walk back into the house to calm myself down,” said Zeke, 48.

The video, posted by the couple’s nephew, has been seen more than 200,000 times.

The contractor offered to take the flag down, according to the video

“No, you don’t need to take it down. You can continue to believe what you need to believe, sir,” Allison said. “But no, I cannot pay you for your services. Thank you, have a good day.”

The video shows the man climbing into his vehicle and driving away with the large flag waving behind.

The flag in the video is the most popular of the three designed to represent the Confederate States of America during the Civil War, fought to preserve the slavery of African-Americans.

Confederate symbols are divisive across the South, and activists have for years condemned the popularity of the flag and statues of Confederate soldiers, particularly on public property. (Those who fly the flag often defend it as a part of their historical pride, not prejudice.)

In 2015, activist Bree Newsome scaled the 30-foot flagpole outside the state capitol in Charleston, South Carolina, to remove the Confederate flag after a white gunman targeted black worshipers at a local church.

After the incident last weekend, the contractor sent Zeke a message: “I didn’t know the flag offended y’all.”

“Yes, it is extremely offensive to anyone of color,” Zeke said he explained to the contractor, according to message screenshots he shared with Yahoo. “I understand it is part of American history, but that flag stood for a time in history where people such as myself had a very bad way of life.”

The contractor, who described himself as a “redneck” to Yahoo, said that his siblings bought the flag for him from a flea market. He said that although he doesn’t “support slavery,” he had no plans to remove the flag and was flying it for the Fourth of July.

Reached by PEOPLE on Wednesday, he said the Browns were being “childish.”

As for Zeke, he said he hoped the incident could create some positive change.

“I thought, ‘Maybe there is hope for someone like him or an opportunity to save him from this way of thinking,’ ” Zeke told Yahoo. “And I wanted that flag off my property — as one of the few black families in our subdivision, what would the neighbors think of a Confederate symbol in our driveway?”