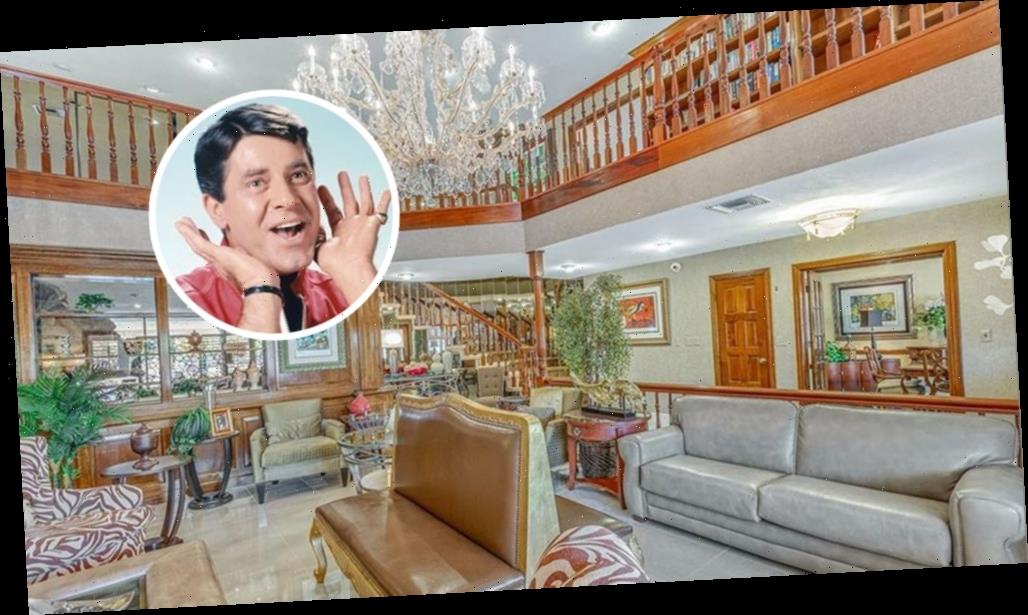 If the walls could talk. The former Las Vegas home of the late Jerry Lewis is on the market for nearly $1.3 million. Built in 1964 in the fancypants Scotch 80s neighborhood, the property was the longtime residence of the famously philanthropic comic genius, starting at the peak of his career in the swinging ‘60s.

Lewis hosted many of his showbiz pals at his home during the three decades he owned it. However, like many Vegas homes of the era, the 7,325 sq. ft., 6-bedroom and 6-bath spread is now in need of a major upgrade. Set on a private .75-acre estate, the vaguely Colonial red-brick building features a second floor veranda that runs along its entire front facade. Inside, oak spindles and hand rails run throughout like a winding race track. Glossy floors, striped wall paper and ‘70s style furniture blast visitors back to a time of giant sideburns and polyester bell bottom pants.

The home also features enough marble to empty a quarry and enough wood built-ins to fell a forest. The gold-toned mirrors that lined the curved staircase in the foyer feel like an ode to a bygone era, as do the electric blue silk drapes in the home office. There’s a double-height formal living room along with a separate family room outfitted with a walk-in wet bar and massive, asymmetrically designed stone fireplace. The undeniably well-maintained and spacious, if considerably, dated kitchen has plenty of room for either an amateur or professional chef.

Some of the guest bedrooms do, thankfully, pull back on the natural wood theme. One of them is painted a garish shade of pink, while the master bedroom is so big it easily fits two huge beds and the master bathroom is sheathed in a dizzying array of floor-to-ceiling mirrors.

A few of the many high-profile folks who have owned homes in the Scotch 80s neighborhood include Nicolas Cage, Steve Wynn and The Killers frontman Brandon Flowers, who formerly owned an estate previously occupied by Howard Hughes and, later, Andre Agassi. Given the property’s prime location in one of Las Vegas’s premier neighborhoods just a few miles north of The Strip, this residence will likely get completely gutted for a major makeover or torn down to make way for something more up to date.

Eric White with Luxury Estates International is the listing agent.