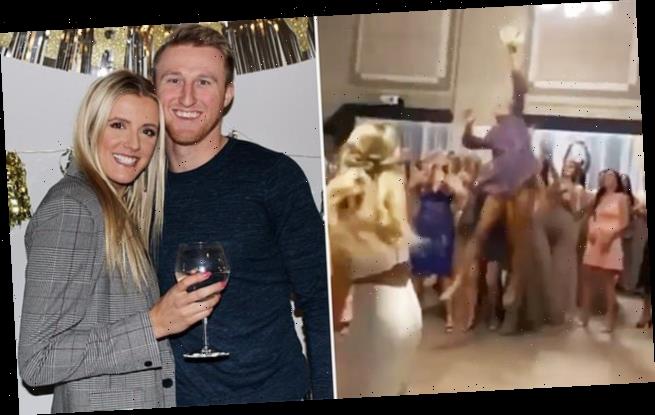 Flying on the wings of love! Volleyball player goes viral after launching herself into the air to snatch the bridal bouquet in brilliant wedding video

A former college volleyball player didn’t stop using her athletic skills after graduation — and in fact, they made her a ringer for catching the bouquet at her friend’s wedding last summer.

In August 2019, Shalyn Greenhaw, 24, from Wisconsin, was on hand to watch her friend Alyssa Folkerts tie the knot in Nebraska.

But when Alyssa tossed her bouquet during the reception, it was Western Illinois University volleyball alum Shalyn who stole the spotlight, jumping heads above the other guests to snag the coveted floral arrangement. 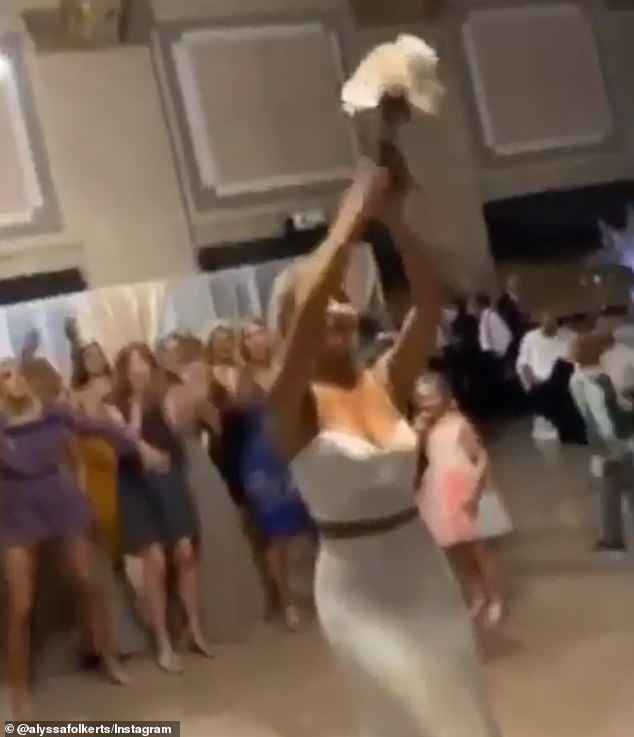 Celebrate! In August 2019, Shalyn Greenhaw from Wisconsin attended the wedding of her friend Alyssa Folkerts 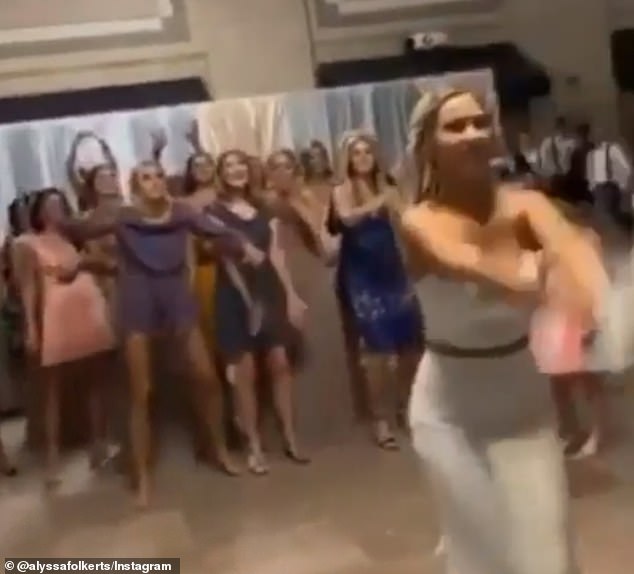 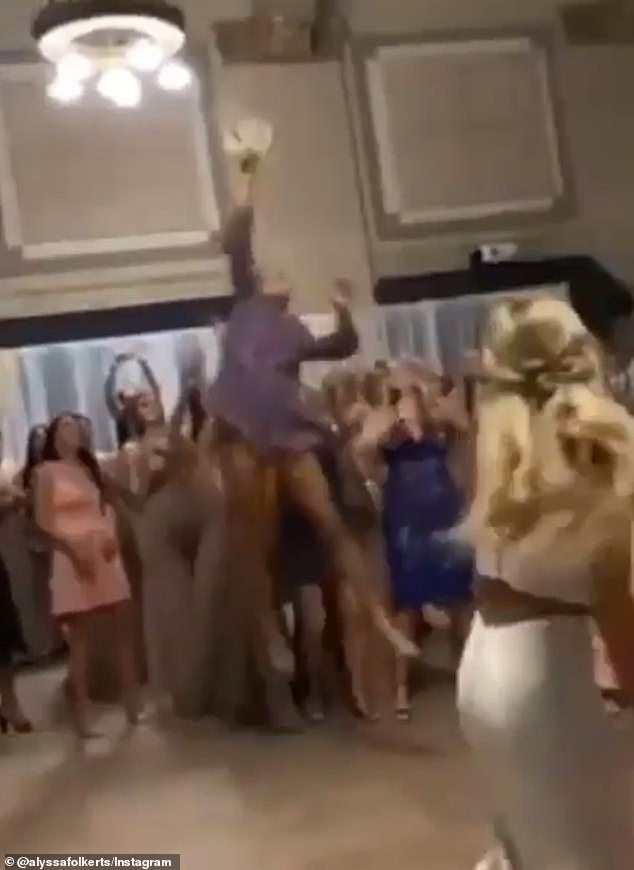 Got it! When Alyssa tossed the bouquet, Shalyn jumped up feet above the other single women at the reception and quickly snatched it from the air

Video of the funny moment went viral soon after the wedding last year, and it is once again racking up millions of views across Twitter and Instagram.

In the clip, Alyssa stands several feet in front of her guests, revving up to toss the bouquet. With a bend, she throws it backward over her shoulders, and then turns around to watch who catches it.

Meanwhile, Shalyn is ready and not messing around. She’s already positioned herself directly in front of the other guests, and has her arms out and prepared.

Barefoot, she’s still taller than the other women, and when the flowers come sailing overhead, she jumps, shooting up high to catch the arrangement before anyone else even has a chance.

Shalyn smiles in the clip as she claims the victory, walking over to the bride with the flowers in hand.

That’s when the camera pans to her boyfriend, Corey Brent, 25, sitting at a table with friends nearby.

Corey, whom Shalyn has been dating for two years, smiles at the camera as his friends point to him, then grabs an alcoholic drink to take a big sip.

Speaking to DailyMail.com, Shalyn said that her athletic skills come in handy for a lot of things.

‘I think being athletic in general does give me an advantage in certain situations,’ she admitted.

She knew she was prepared to ‘go all-in’ for catching the bouquet, explaining: ‘I always try and make everything in life a competition, it keeps life fun and interesting. Being a volleyball player did make me pretty confident in grabbing the bouquet for sure!’ 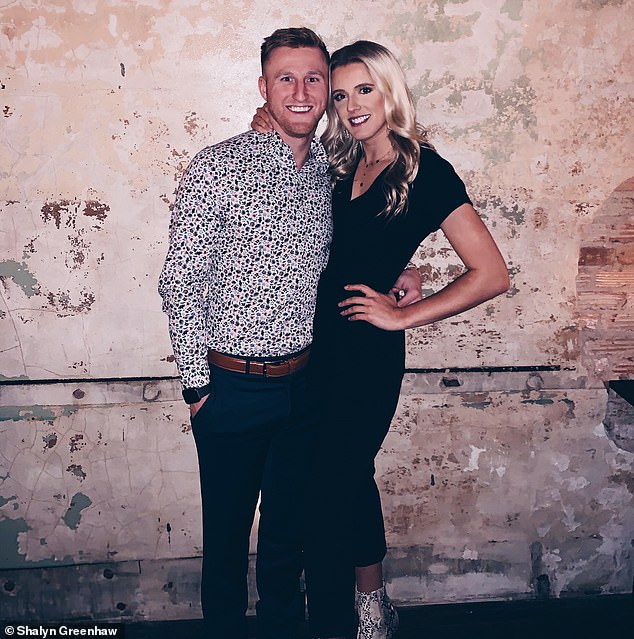 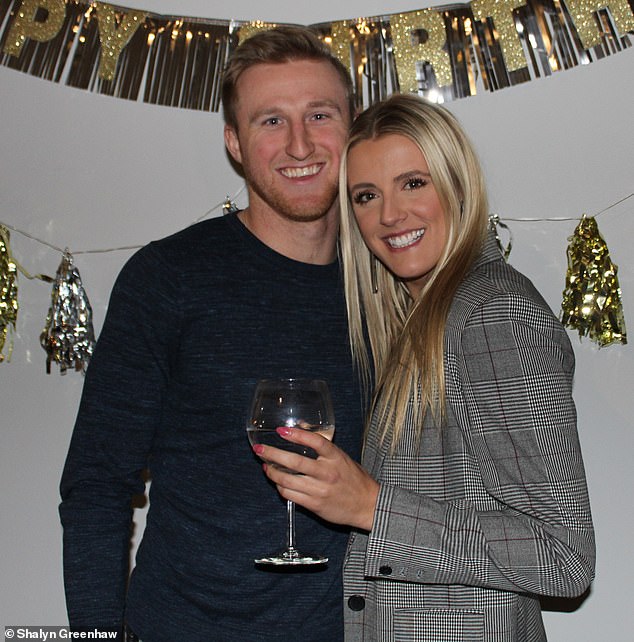 Going strong! They’ve been together for two years, she told DailyMail.com 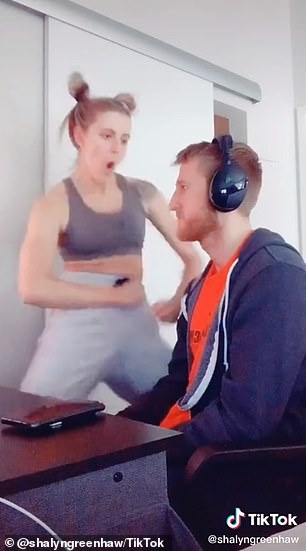 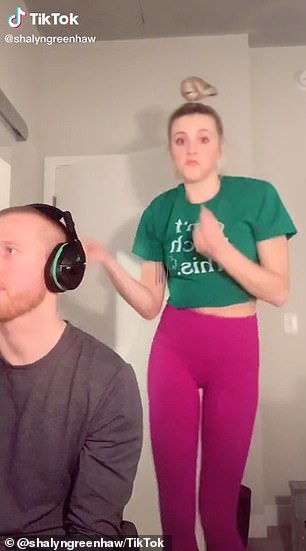 The usual: The young woman admitted that she and her boyfriend tend to be show ponies, so most of the room burst out laughing when she caught the bouquet with such flair

The young woman admitted that she and her boyfriend tend to be show ponies, so most of the room burst out laughing when she caught the bouquet with such flair — and the bride was just as amused.

‘The bride turned around and said, “Of course it’s you!”‘ she recalled. ‘We were laughing pretty hard about it after.’

Corey also thought it was pretty funny and ‘definitely laughed about it after,’ though Shalyn added that he’s ‘not shocked’ by her antics anymore.

While the pair didn’t take Shalyn’s bouquet toss too seriously — they’re still just dating — Shalyn did reveal that she’s the maid of honor in another wedding this weekend.

‘So stay tuned for part two!’ she joked.