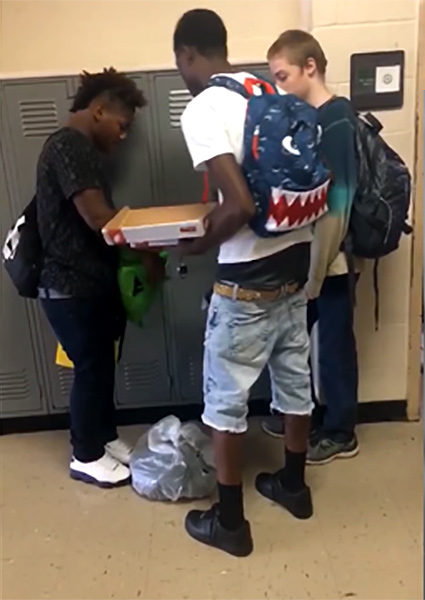 Two high school football players took it upon themselves to help out a classmate in need after he was relentlessly bullied for wearing the same clothes every day.

Kristopher Graham and Antwan Garrett, students at MLK College Preparatory School in Memphis, Tennessee, reached into their own closets to help give classmate Michael Todd a new wardrobe.

The pupils both uploaded video of their good deed to Facebook, and the clip of them handing Todd bags of shoes, shirts and shorts in the hallway quickly went viral.

“He wasn’t smiling or anything, and I was like, ‘Yeah, I think this is going to make him smile,’ ” Graham told local Fox affiliate WHBQ. “I told him –— we were in the same third period — I said, ‘I apologize for laughing at you, and I want to give something to you to make it up.’ ”

Todd, a freshman, said that while he was “shocked” by the gesture, it made him “very happy,” as his mother is unable to buy new clothes for him because he’s growing too fast.

“No, I don’t really have clothes at home,” he told WHBQ. “I’ve been bullied my entire life.”

After Graham saw the bullying first-hand, he felt moved to act and texted Garrett, telling him to raid his closet for any clothes they might be able to pass down.

“It was a weak moment for me. I was going to cry,” Garrett said of giving Todd the clothing, which included a new pair of shoes.

Graham, too, was nearly moved to tears, especially when Todd told him later that he and Garrett were the only two people to ever give him a gift.

“You guys are the best guys of my entire life,” Todd told Graham and Garrett.

Erica Williams, spokeswoman for Frayser Community Schools, tells PEOPLE in a statement that Todd’s situation is not unique, and because of that, the school set up a clothing closet last year to provide additional wardrobe assistance.

“Antwain, Michael and Kristopher are overwhelmed by the outpour of support from our community and people from across the country,” the statement read. “Unfortunately, situations that show students in need are not unique within our school because we serve a demographic where the household income is well below the state and national average.”

Williams said those looking to donate can head to http://fraysercs.org/give for more information.