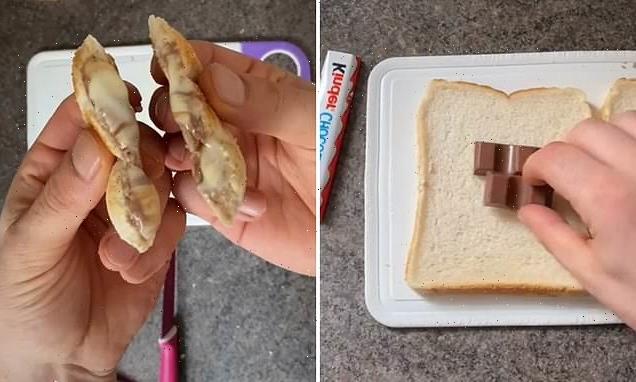 A foodie has wowed millions after he created an epic two-ingredient toastie oozing with melted chocolate.

Adrian Ghervan, from London, used two slices of bread and Kinder chocolate bars to take his toastie to the next level.

The man shared a now-viral TikTok video with more than 24 million views showing exactly how he made the indulgent snack in just minutes.

To make the sweet toastie, Adrian simply placed four squares of the chocolate in the centre of the bread, then topped it with another slice.

Using a glass cup or a wine glass, he pressed the rim into the bread, ensuring the edges are sealed to create a round pocket.

He toasted the creation in a toaster until golden brown. Once toasted, he sliced the bread in half, which showed the melted milk and white chocolate.

In the video, he described the toastie as a ‘life hack’ he ‘randomly saw’ and decided to recreate it himself.

Many said they were keen to try it out  while others who attempted to make the snack said it didn’t turn out as planned, with one woman revealing: ‘The chocolate fell out and got stuck and almost set the toaster on fire. We had to buy a new one.’

While others pointed out he could just use Nutella so he doesn’t waste any bread.

‘I did this with Nutella and it’s literally heaven,’ one wrote.

Adrian has since made several viral videos of toasties, using other ingredients such as Oreos, Cadbury chocolate block and half a Kinder Surprise egg.