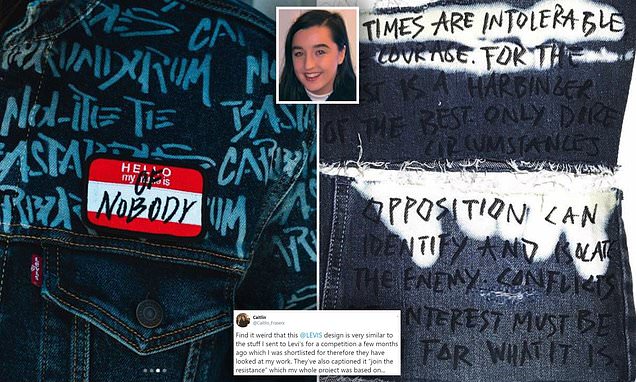 A fashion student has hit out at £5.1bn denim brand Levi’s for allegedly ripping off her designs.

The third year fashion and design student from The Glasgow School of Art claims the brand ‘stole’ ideas from her, after she entered and was shortlisted for one of its competitions.

Pictures show Caitlin’s work, which features the words of conceptual artist Jenny Holzer bleached onto distressed denim, compared alongside a Levi’s jacket that has quotes from The Handmaid’s Tale printed on to it. 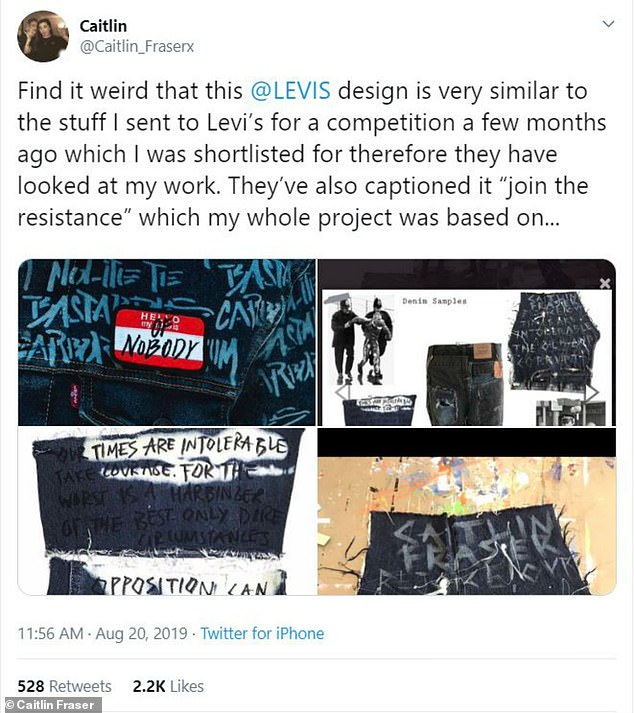 A fashion student from Glasgow hit out at denim giant Levi’s, claiming they stole her designs for their joint Handmaid’s Tale campaign with Hulu 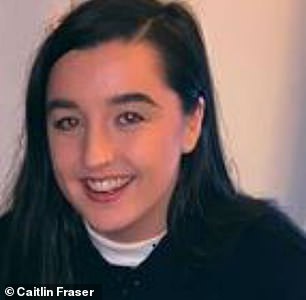 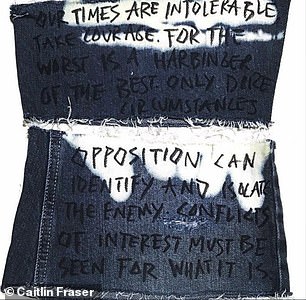 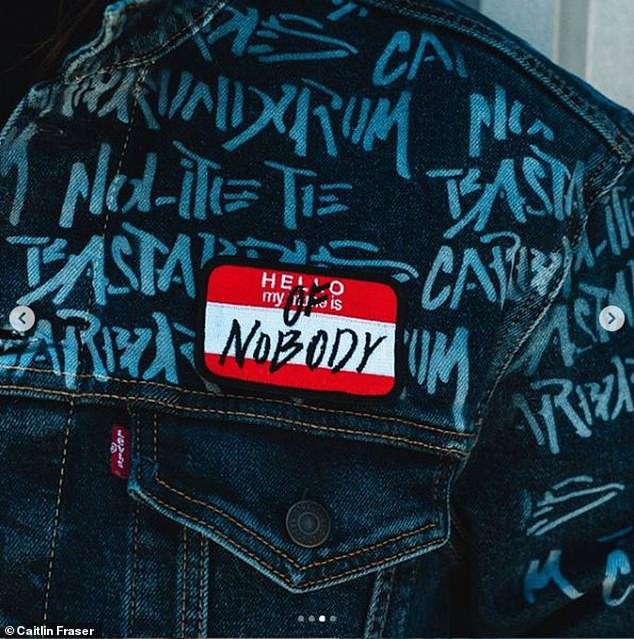 The Levi’s design, which consists of quotes from the Handmaid’s Tale highlighted in bleach on a denim jacket

Caitlin took to Twitter to vent her frustrations, sharing images of her work alongside Levi’s latest range.

She captioned it: ‘Find it weird that this @LEVIS design is very similar to the stuff I sent to Levi’s for a competition a few months ago which I was shortlisted for therefore they have looked at my work.

‘They’ve also captioned it “join the resistance” which my whole project was based on…’.

Social media users reacted with outrage to the Tweet, which has clocked up over 2,000 likes.

Bracken Buchan replied: ‘I would be so livid if that happened to me! It’s actually shocking how many up and coming designers have the same stories about big companies ripping off of them!

‘Deffo get a lawyer if it’s not been put in the small print and even then surely you should get a cut of the proceeds,’ they added.

Kelly Sloan retweeted Caitlin’s photos with the caption: ‘Absolute snakes. Why do big brands LUUUUV to steal ideas from designers and give them no credit for it, like they’ve actually just stolen a whole idea (sic)! 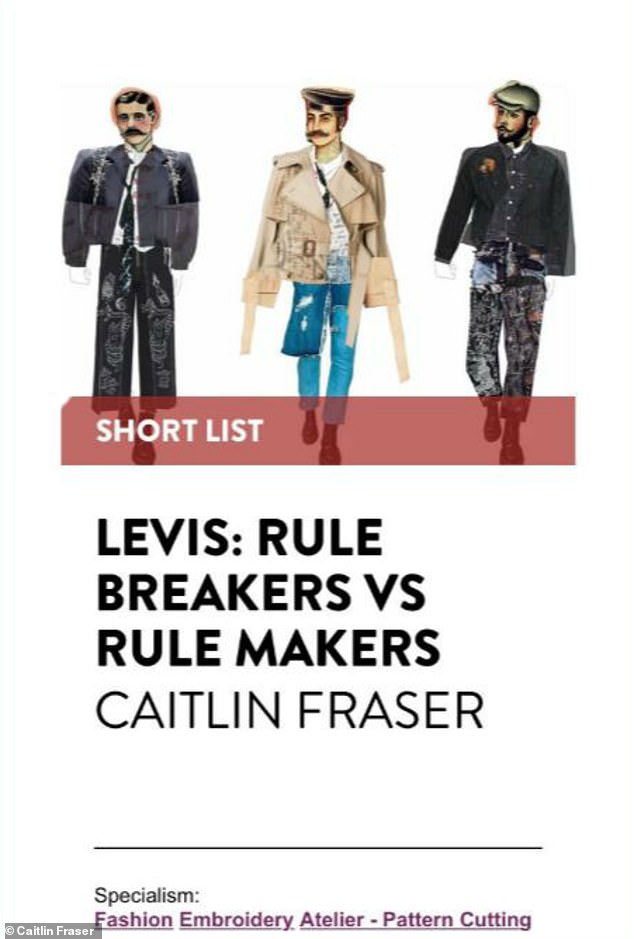 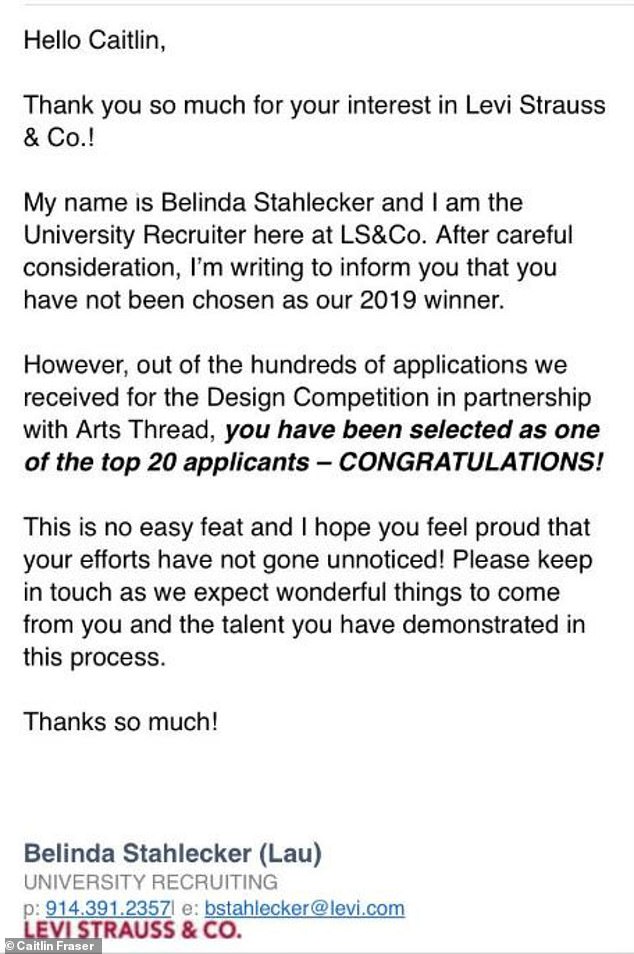 An email from Levi’s to Caitlin informing her that while she hadn’t won the overall competition, she was shortlisted as one of the top 20 entrants 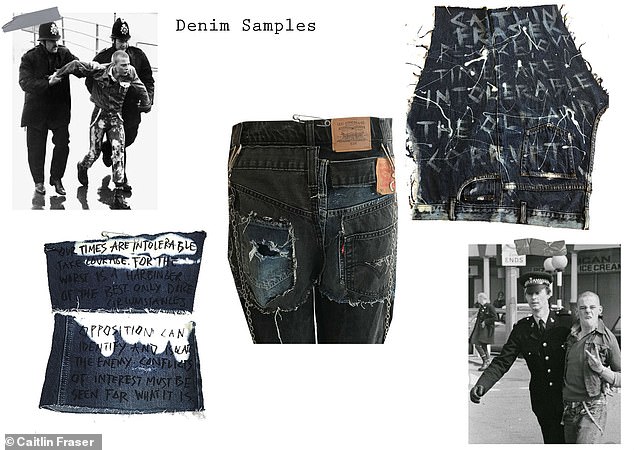 ‘They’re an actual billion dollar company the least they could do was give Caitlin a bit of recognition. Embarrassing.’

‘Wtf, in one way this is great cos it just shows how cool your ideas are, but on the other hand how f****** annoying!! I smell a lawsuit (sic),’ another wrote.

Replying to the comments Caitlin added: ‘They had the absolute cheek to tell me I hadn’t won their competition but then stole ideas off me.’

Caitlin had been shortlisted in the top 20 of the Levi’s X Arts Thread 2019 competition for her concept entitled: ‘Rule Breakers vs Rule Makers.’

Levi’s tweeted the image to advertise their new line of patches inspired by TV drama The Handmaid’s Tale, based on Margaret Attwood’s 1985 novel about life in a dystopian United States.