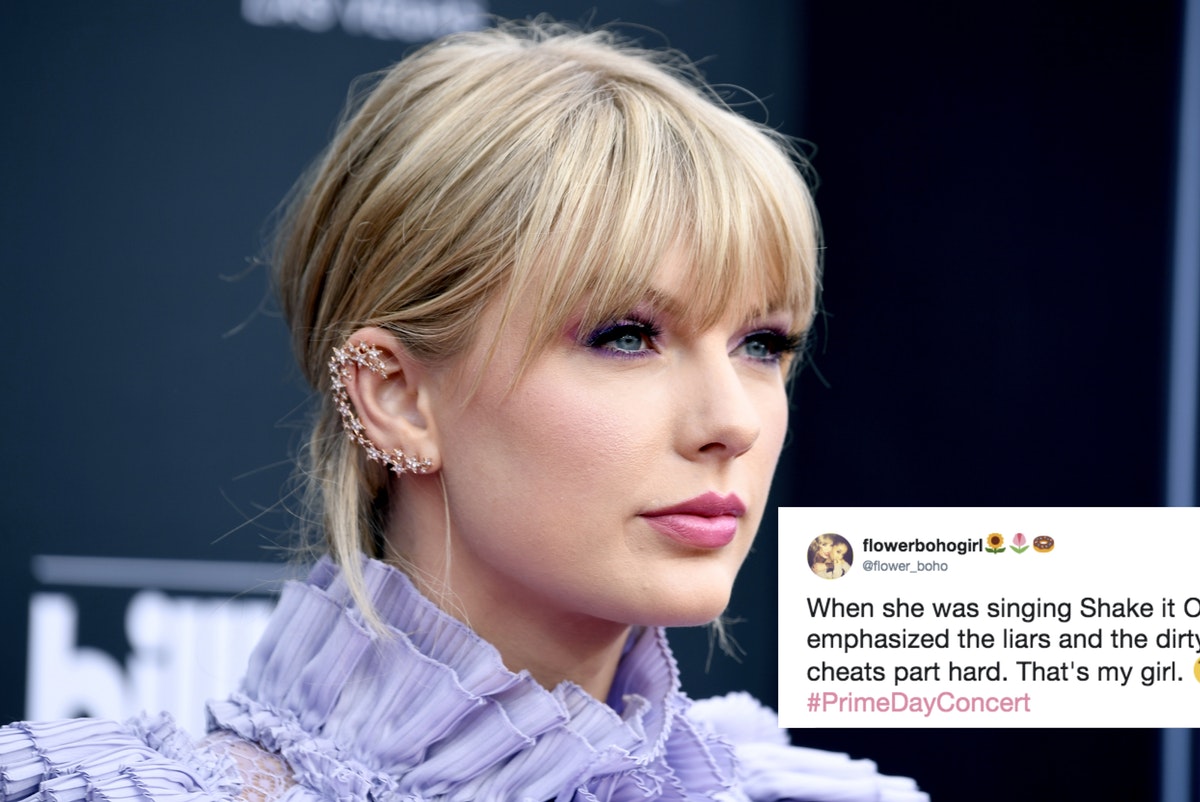 In the nearly two weeks after Taylor Swift called out Scooter Braun and Scott Borchetta for not allowing her to buy her masters, she hasn’t chosen to comment again on the subject. But now, she may have referenced the situation while performing, making it very clear to fans that she’s still not OK with it. During her Amazon Prime Day concert on Wednesday night, Swift may have shaded Scooter Braun on stage, and fans really seem to be living for it.

It all went down when Swift performed "Shake It Off", which included a lyric that seems to hold new meaning for her. As one fan pointed out on Twitter, as Swift sang, "Just think, while you’ve been getting down and out about the liars and the dirty, dirty cheats in the world," she really put emphasis on "liars and the dirty, dirty cheats," and it hasn’t taken long for people to speculate that she had Braun in mind when she performed the song.

Of course, Swift has yet to comment on whether or not that was her intent, but as Elle pointed out, she has been liking posts referencing the moment on Tumblr. The speculation has officially begun, and watching the video of the moment it happened, it seems pretty likely that she was hinting at the situation.

Many fans have been tweeting about the moment, convinced that she was speaking directly to Braun as she sang — and being that "Shake It Off" was her last song of the night, it seems like it was a great way of ending her performance while leaving people with something to talk about.

After news broke that Braun had purchased Big Machine from Borchetta last month, on June 30, Swift took to Tumblr to share her feelings on the situation, revealing the "incessant, manipulative bullying I’ve received at [Braun’s] hands for years." She went on to claim that Borchetta was aware of how Braun made her feel, and that she’d gotten emotional about the way he treated her in front of Borchetta in the past, which seemed to make it an even bigger betrayal that the masters from her first six albums were now under Braun’s ownership. She also wrote that the only offer Borchetta made her was for her to earn her albums’ masters back, one new album at a time. (At the time, Bustle reached out to Braun’s rep for comment, but did not hear back.)

"When I left my masters in Scott’s hands, I made peace with the fact that eventually he would sell them. Never in my worst nightmares did I imagine the buyer would be Scooter," Swift wrote. "Any time Scott Borchetta has heard the words ‘Scooter Braun’ escape my lips, it was when I was either crying or trying not to. He knew what he was doing; they both did. Controlling a woman who didn’t want to be associated with them. In perpetuity. That means forever."

At the time, Borchetta responded with a post of his own, claiming that Swift was lying about some of the details she shared on Tumblr and writing, including the finer points of their negotiations when she was considering re-signing with Big Machine at the end of her contract.

It’s hard to predict if Swift will open up about the situation again in the future — or if any songs on her upcoming album, Lover, will reference the battle for her masters now that she’s releasing her first record with Universal. But for now, it seems like she’s not willing to let Braun or Borchetta get the best of her, and the sass is real.