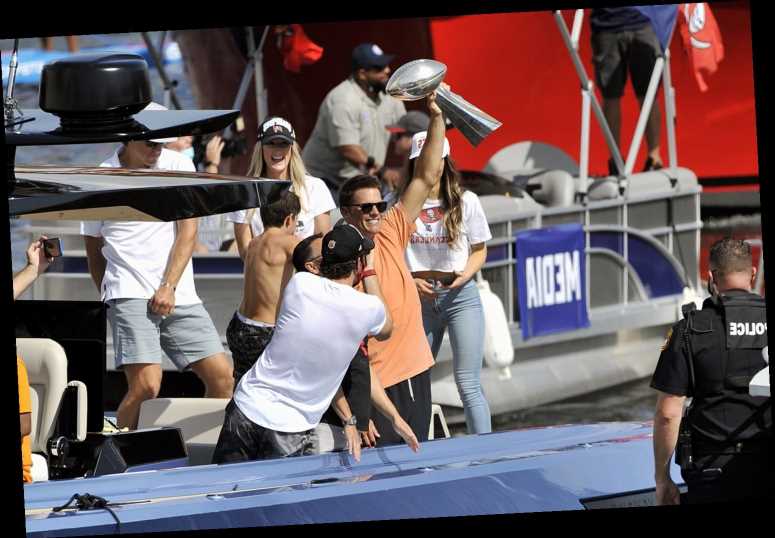 While appearing virtually as a guest on Watch What Happens Live on Wednesday, the 42-year-old sportscaster reacted to that watching Brady, 43, celebrate during the Tampa Bay Buccaneers Super Bowl victory boat parade in February.

Asked by WWHL host Andy Cohen if it was "fun" to see the football star "letting loose," Andrews said, "I loved it," before she compared Brady to the Real Housewives of New Jersey's Jennifer Aydin, who was also appearing as a guest on the late-night show.

"I thought it was the best ever," she added of Brady's antics. "I thought what was so cool about it was he looked like a little kid … he was kind of just walking off the boat with a big smile. It was awesome to see."

Last month, after the Buccaneers beat the Kansas City Chiefs at Raymond James Stadium to win Super Bowl LV, the Tampa Bay team celebrated on the water instead of with a traditional winners' parade due to the ongoing COVID-19 pandemic.

Players including Brady — who was joined by his kids — and Rob Gronkowski rode on various watercraft around the harbor area in Tampa, clad in the team's signature bright red and white. While appearing virtually as a guest on an episode of The Late Late Show earlier this month, Brady reflected on the parade and opened up about tossing the Lombardi Trophy from one boat to another during the gathering.

After host James Corden showed video of the heart-stopping toss, Brady explained, "First of all, I was not thinking at that moment. There was not a thought. It was just, 'This seems like really fun to do!'" Thankfully, the Lombardi Trophy was caught by Brady's teammate, tight end Cameron Brate, a feat that the football star said that he was "so happy" about.

"I found out later that — had that been an incomplete pass — that would have went down like 80 feet," Brady added with a laugh during his appearance.

The late-night host also shared a video of Brady after he and his teammates concluded the boat parade, where the seven-time Super Bowl champion was stumbling and seemingly unable to walk on his own.

When asked by Corden, "Is this sea legs or, dare I say it, a touch of tequila?" Brady replied, "Oh man, well, I think a little of both."

"I will say it was a moment of celebration," he added. "I'm happy to be on land, in that moment, and I'm happy to be surrounded by my fellow quarterback [Ryan Griffin], in the right place at the right time."

Brady's teammate Gronkowski, 31, recently spoke about the celebrations during an episode of the 10 Questions with Kyle Brandt podcast on Wednesday, where he defended Brady tossing the trophy.

Asked whether or not Brady getting "wasted" and throwing the Lombardi trophy during the parade was "the right way to celebrate," the Buccaneers tight end said, "That is how you celebrate a Super Bowl because you celebrate 600 times so you gotta step it up a little bit when you're at a parade."