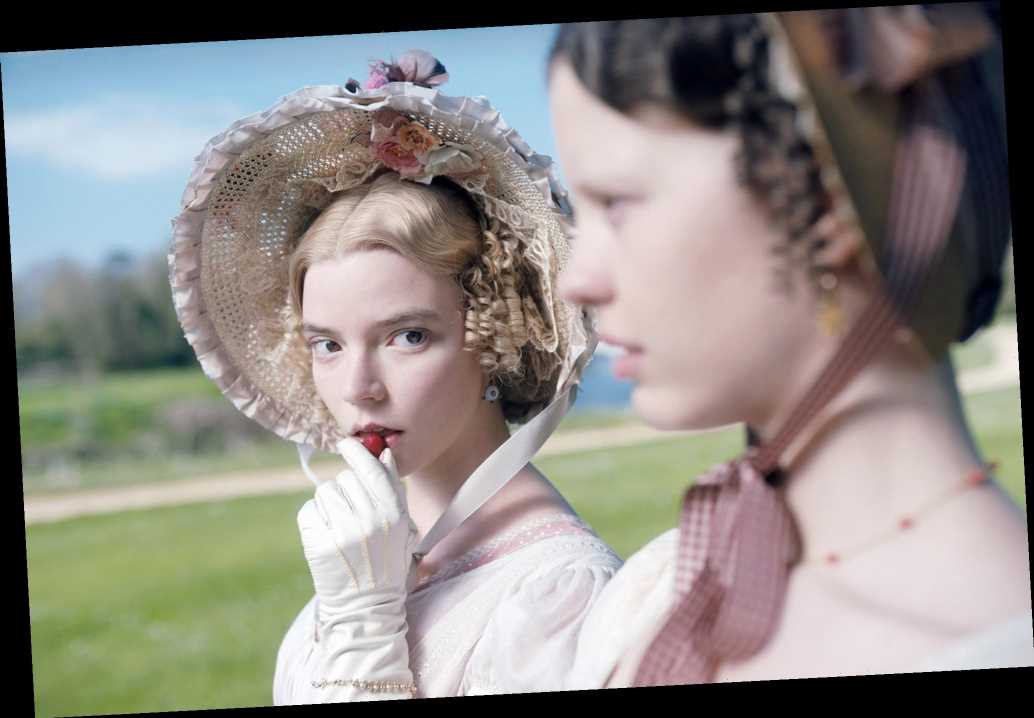 All Jane Austen’s heroines are clever, but Anya Taylor-Joy brings an unusually sharp edge to her rendition of Emma Woodhouse in “Emma.” Maybe it’s the lingering influence of Taylor-Joy’s sociopathic character in 2017’s underrated “Thoroughbreds.” At any rate, she’s the standout in this likable adaptation. It’s notable that this version’s title is adorned with a period; I’m not sure the definitive gesture is entirely warranted, but I admire its confidence.

The happily meddling younger daughter of a moody father (played with expertly gusty sighs by Bill Nighy), Emma believes her life’s work to be arranging other people’s love lives (she professes no interest in romance for herself). She steers her latest subject, the pleasant, simple Harriet Smith (Mia Goth), away from an adoring working-class farmer (Connor Swindells) and toward the simpering minister Mr. Elton (Josh O’Connor), with a stunning lack of insight into the latter’s interest in Emma herself. Meanwhile, she’s got a handsome, eye-rolling neighbor — another Austenian fixture, of course — by the name of Mr. Knightley, nicely underplayed here with just the right amount of smolder by Johnny Flynn (“Beast”).

Debut feature director Autumn de Wilde, whose background is in videos, loses a bit of focus when it comes to the story’s supporting characters: Frenemy Jane Fairfax (Amber Anderson) isn’t really given enough screen time for us to know why she’s such an irritant to Emma, and the long-awaited, much-discussed Frank Churchill (Callum Turner) isn’t charismatic enough to deserve the buildup to his arrival (in 1996’s “Emma,” he was played by Ewan McGregor, who has never suffered that problem).

But de Wilde has a good grasp of Austen’s sense of humor, and she plays it up with some amusing bits, including Mr. Woodhouse’s habit of surrounding himself with an increasingly ridiculous number of folding screens to protect himself from a mysterious “draft” (which seems to be a metaphor for the plague of constant visitors) and a couple of literally cheeky moments in which Emma and Mr. Knightley bare their rear ends while getting dressed.

Watching Emma haltingly approach self-awareness — particularly in the epically cringe-y Box Hill picnic at which she insults a vulnerable acquaintance (the comic talent Miranda Hart) — is an enjoyably tense experience. Taylor-Joy’s self-possession as Emma feels a little at odds with the romantic surrender that Austen’s conclusions always require — it certainly sets her apart from the Gwyneth Paltrow incarnation (and the Alicia Silverstone one in the ’90s “Emma” riff “Clueless”). Like Greta Gerwig’s twists in “Little Women,” it’s also a nicely modern undercutting of the very notion of coupling as a happy ending.