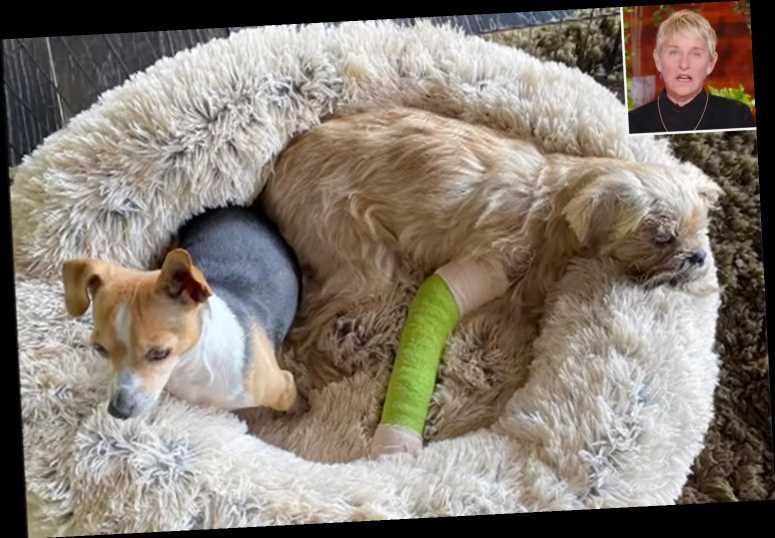 One of Ellen DeGeneres' beloved pets has broken his leg.

The day time talk show host, 62, shared on Tuesday's episode of The Ellen DeGeneres Show that her dog Kid suffered the injury in an accident with Wally, the poodle she rescued last year.

"Okay, so here's the deal. We have pets. You know we have pets. And we have dogs that run around like crazy. And there's a lot of pet traffic when that happens," DeGeneres said at the top of the show. "And sooner or later, there's bound to be an accident."

"Over the weekend, our dog Wally, who is, she's a little over a year, and so she's a puppy, so she's got a lot of energy, and she was running full-speed across the lawn," the comedian explained.

"Our dog Kid happened to be in the way, and she just trampled over Kid," DeGeneres continued, joking that Wally's speed was "illegal because the speed limit is 25 when there's a kid nearby."

"Anyway, so Kid was screaming in pain, and we knew that his leg was broken. It was awful, awful, awful," she recounted to the virtual audience, adding that she and wife Portia de Rossi took Kid to the pet hospital.

DeGeneres shared the news about Kid on the second day back from the show's summer hiatus. On Monday, the host addressed the allegations of workplace toxicity, saying that she "learned that things happened here that never should have happened. I take that very seriously, and I want to say I am so sorry to the people who were affected."

WarnerMedia conducted an internal investigation into The Ellen DeGeneres Show following numerous complaints of workplace toxicity over the summer, and three top producers — Ed Glavin, Kevin Leman and Jonathan Norman — have parted ways with the show in the investigation's wake.

DeGeneres previously apologized to the staff, who have since learned that they will now receive increased benefits.