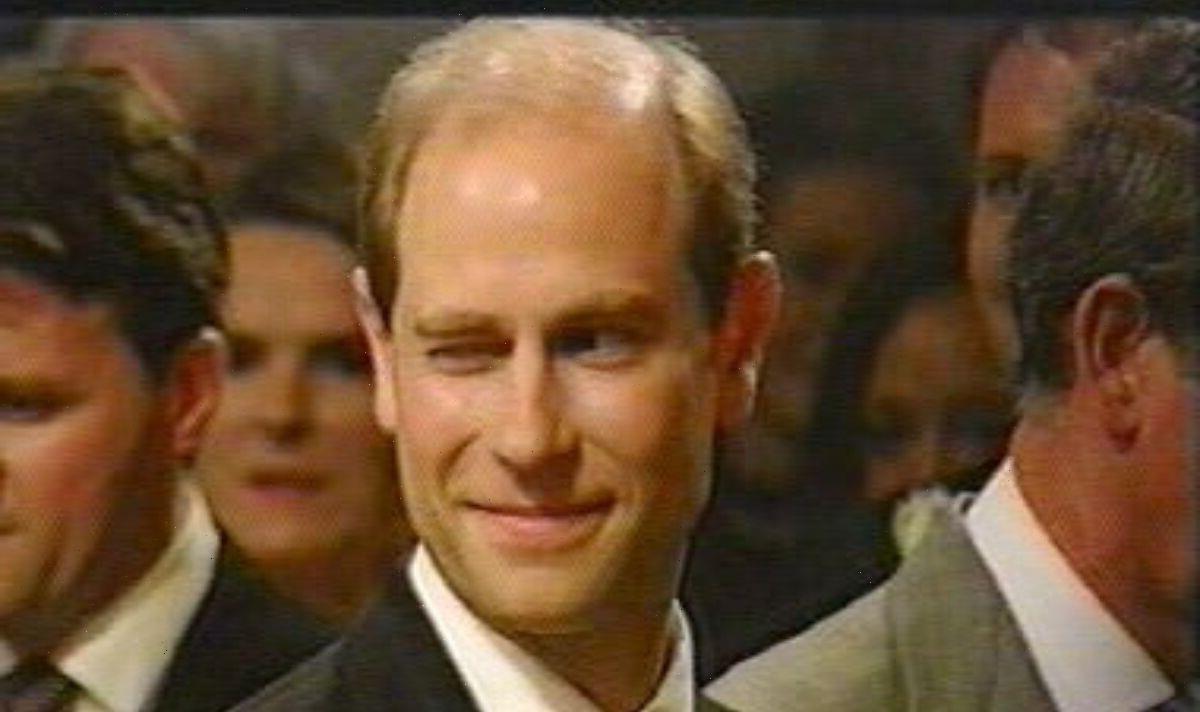 Prince Edward and Sophie Wessex arrive for wedding in 1999

Sophie, Countess of Wessex and Prince Edward, both 58, tied the knot on June 19, 1999, in St George’s Chapel in Windsor. In one photograph from the day, the Earl of Wessex appeared to be winking at the Countess just before they took their wedding vows.

Judi James, a professional body language expert, spoke exclusively to Express.co.uk to explain what Edward was feeling at that moment, and whether or not he has a “cheeky” personality like other members of the Royal Family.

She claimed: “Edward clearly revelled in the attention and royal ceremony of his wedding day but for Sophie, the event looked much more nerve-wracking.

“We can see Edward throwing reassuring glances at her as she walks out of the ceremony and down the steps and his wink as she walked up the aisle was a slightly cheeky gesture of reassurance and admiration or approval, that looks as though it also doubled as a way of relaxing her nerves.”

According to the expert, the winking could look “extraordinary”, but actually this was expected for someone with Edward’s character.

Judi opined: “The winking might look like an extraordinarily informal gesture from a Prince who now keeps a much lower and even slightly diffident profile these days.

“But back in the day, he was known as being the Prince who wanted a career in the performing arts and who organised the infamous ‘It’s A Royal Knockout’ to try to show the lighter, more playful side of the Royal Family.”

Sophie, on the other hand, was much more nervous at the royal wedding, Judi claimed.

She continued: “A rather independent and quietly confident woman who had worked in PR, Sophie had several challenges as a royal bride.

“Firstly there had been a flurry of disastrous marriages before her, meaning that although the fans assumed Charles and Diana would be together for life, the expectation had dropped to a few years at best by the time Edward married her.

“She was seen as something of the last hope in terms of the Queen’s children making good, long-lasting marriages.”

The late Diana, Princess of Wales had only died two years before the wedding of Sophie and Edward’s wedding.

Judi added: “And then there was her visual similarity to Diana. The country had lost the woman they adored and there was an attempt to cast Sophie in a similar role, which could have led to a total loss of privacy had she been mobbed in the same way.”

According to the body language expert, viewers felt “sympathy” for the Countess on her wedding day.

Judi suggested: “On a more practical note, despite how beautiful, natural and radiant Sophie looked on the day, most women watching at the time felt a sense of sympathy for her in terms of her dress.

Her dress was designed by Samantha Shaw. The coat dress was decorated with over 325,000 pearls and crystal beads, some of which lined her V-neck, wide sleeves and skirt.

Sophie finished off her bridal look with a full-length veil made of silk tulle and crystals, held in place by a diamond tiara from her late mother-in-law Queen Elizabeth’s private collection.

Judi added: “Either she had lost weight though, or it needed an extra fitting, but the bodice looked too big for her slim frame, meaning it gaped and even in the carriage shot we can see it is lifting at the shoulders, revealing one bra strap.

“Modern brides might have been in floods of tears but Sophie carried it off with the stoicism she is famous for today.

“She did show signs of nervousness in her body language though. Her teeth are slightly clenched in the smiles and her royal wave involves a partial cupping of the thumb.”