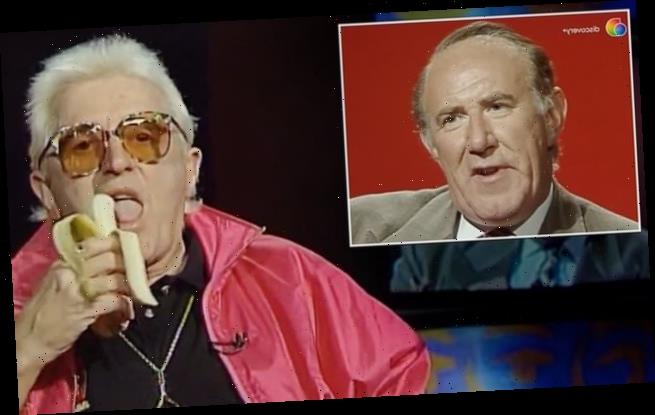 Jimmy Savile avoided questions about his ‘playboy’ lifestyle on Is This Your Life? by eating a banana in a ‘smoke and mirrors moment’ while the ‘raised pitch’ of his voice suggests deception, fresh expert analysis reveals

In new Discovery+ documentary Faking It: Jimmy Savile experts in body language, speech and forensic psychology analyse television footage of Jimmy Savile for the first time, and reveal the moments where he used diversionary tactics to hide his secrets in plain sight.

In one of the most revealing interviews of his career, the former Jim’ll Fix It presenter joined journalist Andrew Neil for a conversation on Is This Your Life? in 1995 where the host tried to scratch away at the truth behind Savile’s playboy image.

Straight away, Savile uses his persona of the ‘zany DJ’ to avoid the question, instead taking out a banana and eating it – something which body language expert Cliff Lansley suggests is his method of hiding the truth.

‘Why have a banana prepared in your pocket? Because he knew he would get some difficult phases in the interview, and therefore having some props handy would help him to counter that and get the audience engaged again,’ he explains. ‘He’s got the smoke and mirrors in place,’ 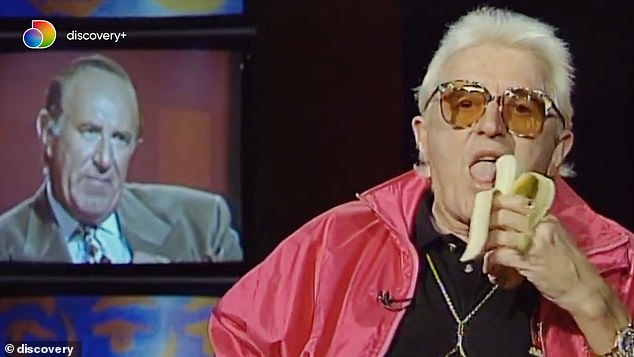 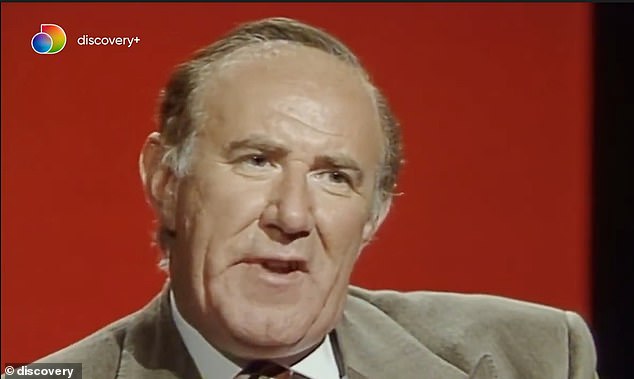 During the interview, Neil (pictured) tried to scratch away at the truth behind Savile’s playboy image

Kerry Daynes adds. ‘I mean what a use of a banana in order to avoid questions about his sex life. Andrew Neil is a very well-respected interviewer but there’s a subtle pulling of rank there; as soon as the banana comes out, the question that he’s been asked leaves the mind of the audience. It’s a way of going, “look, look over there!”‘

‘This is a guy who absolutely understood TV,’ he explains. ‘You could be asked the most difficult question in the world, but if you do something stupid you can get them off your back.’

As the interview progresses, Savile’s behaviour continues to suggest deceit. And as he and the studio audience are shown messages from some of his closest friends,

Savile is taken off guard when one friend claims that Savile had ‘an eye for the ladies, young ones as well. And when I say young, I mean the proper age. 16 upwards.’

As Dawn Archer pinpoints, this verbal slip from Savile’s friend is another red flag that highlights Savile’s secret activities.

‘It’s almost like he does a self-correction at this point, which itself is interesting,’ she says, before questioning: ‘Why did he feel the need to make sure that “young ones” meant 16 and over?’ 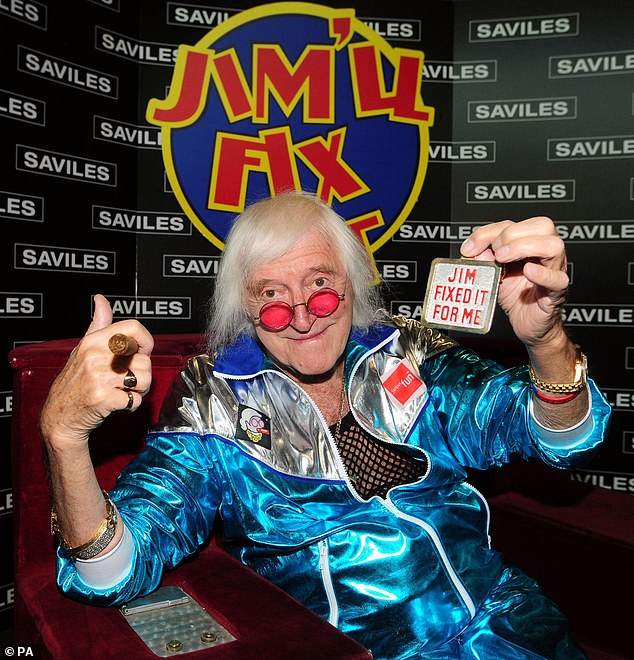 For over five decades, he was the biggest name in British showbusiness – presenting shows including Top Of The Pops and Jim’ll Fix It (pictured in 2009) 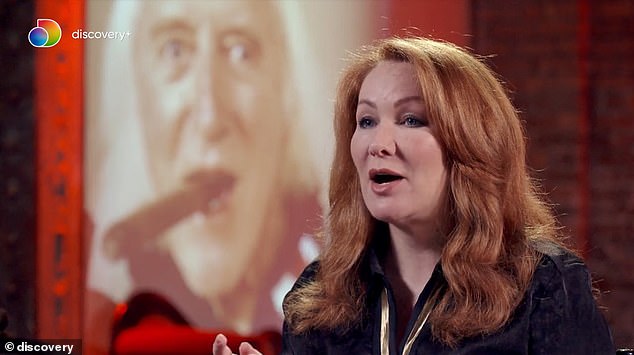 Speaking of the interview, Kerry Daynes (pictured) says: ‘I mean what a use of a banana in order to avoid questions about his sex life’

Another friend went even further, naming a woman that Savile knew and the hotel where they had met. Analysing Savile’s behaviour reaction, Cliff Lansley pinpoints the moment Savile’s body betrays him.

‘Now, he’s a quick thinker; he’s a member of Mensa. He’s a smart character and he’s just had this surprise sprung on him,’ Cliff explains. ‘What we’ve just seen is a series of five rapid blinks. When we see a rapid blink rate, that shows that he’s thinking hard. Psychologists call this cognitive load.’

After gathering his thoughts, Savile goes on the counterattack, explaining that ‘Bunny has now fixed it for me to get him off the hook with his Mrs,’ to laughs from the audience.

For Kerry Daynes, this is Savile flexing his muscles again, masking threats with humour and signalling the truth.

‘Now, that’s a very clear message to the friend, and it’s quite an intimidating message. It says, “you mess with me, and I’ll mess with you.” Even though it’s witty banter as far as the audience is concerned, it’s probably not that funny for the friend.’

As Savile claims to have no recollection of the victim, Dawn Archer highlights signs that suggest Savile is faking it.

‘We have him almost pretending that he doesn’t even know her name, even having used her name several times,’ she says. ‘We have an admission potentially that he was ‘beastly’ with her, which leads us to ask, “well was she a victim?”

Continuing, Savile’s body language continues to subconsciously leak the truth. When asked if he had anything to hide by not permitting his secretary to appear on the show, Savile proclaims ‘oh no, no, she knows nothing.’ 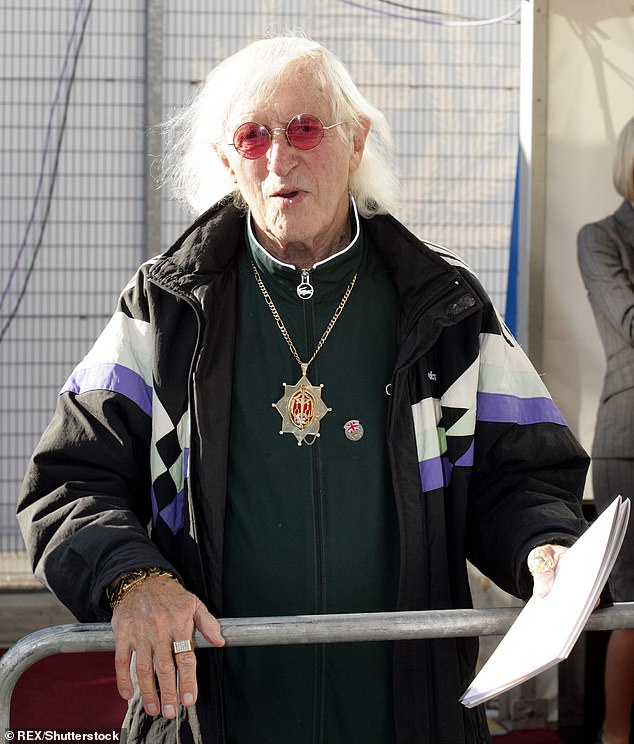 ‘Pay attention to the pitch. It’s higher than his base line, the base line being the pitch we’ve heard throughout the interview,’ he says. ‘So that suggests that we’ve got tension in the throat.

‘When the pitch increases it’s because the vocal cords are stretched. That stretching can be a secondary effect of the muscle tension that is throughout the body when we’re anxious.’

Pushed further by the interviewer, Savile is asked if his secretary fears him, prompting a response of “I should hope she’s a lot scared!” to chuckles from the audience.

Having used humour as a diversion tactics throughout the interview, this is another moment where Savile’s mask slips and his true, evil self is revealed.

‘One of the ways he could have answered this was to stress ‘oh no, she’s got no need to be scared of me.’ That isn’t where he goes,’ Dawn Archer says. ‘And we then get an increase in volume when he tells us ‘I should hope she’s a lot…’ not a little bit.

He used a maximiser in place of the minimiser. In other words, he’s happy for people, especially the presenter at this point, to understand that he’s very much in control,’ Dawn adds.

‘He wants the secretary to be scared of him. The delivery comes across as more serious. He’s used humour throughout; this doesn’t sound like humour.’

Up until his death in 2011, Savile continued to present himself as the wacky eccentric with a penchant for charity work. In reality, Savile used his showbusiness status and links to charity work to abuse children.

A review published in 2016 found Savile had sexually abused upwards of 72 people. Many argue that the true tally of Savile’s crimes exceeds well over 200, but we may never know the true extent of his crimes.