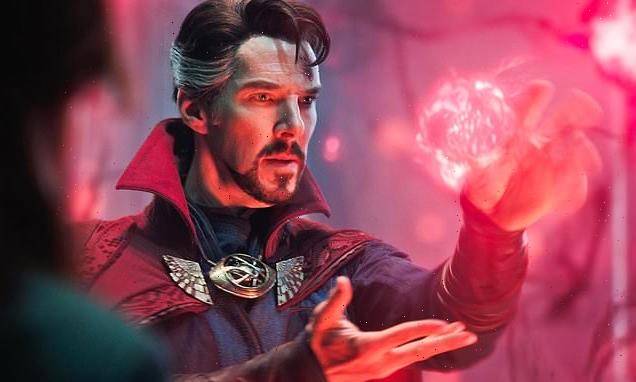 It’s already old hat: Elizabeth Olsen’s stellar performance is the only part of Dr Strange In The Multiverse Of Madness worth watching

From a clunky opening that could have tumbled straight out of Doctor Who to an early scene involving a bus-chomping octopus that is pure Ghostbusters, one thing quickly becomes clear: Dr Strange In The Multiverse Of Madness is no film for proper grown-ups.

Yes, it may appeal to hardcore Marvel fans (there’s barely a Marvel film that doesn’t) and the more committed Benedict Cumberbatch completists, but for the rest of us?

Definitely not so much – I felt uninvolved after 15 minutes and dangerously close to bored as we ran into the second hour. 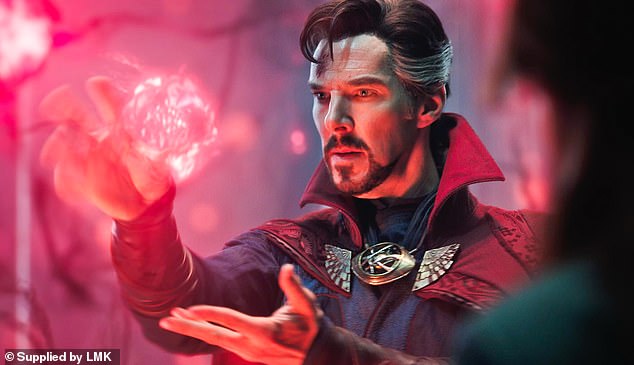 Yes, this may appeal to hardcore Marvel fans and the more committed Benedict Cumberbatch (above) completists, but for the rest of us? Definitely not so much

And I like most Marvel films. If it hadn’t been for the fine work by Elizabeth Olsen as Wanda Maximoff – otherwise known as the Scarlet Witch – I might have given up.

As one of the most complex female characters in the entire franchise – she’s both in mourning and desperate to be reunited with children who may only exist in her magical imagination – Olsen is the best thing in it by… well, a serious multiverse or three.

Ah, the multiverse, that mind-bending notion that in umpteen parallel universes alternate versions of our lives are being played out simultaneously.

It’s not even six months since this fiendishly clever concept enabled three different Spider-Men to appear in the same film, producing one of the great cinematic highlights of 2021. 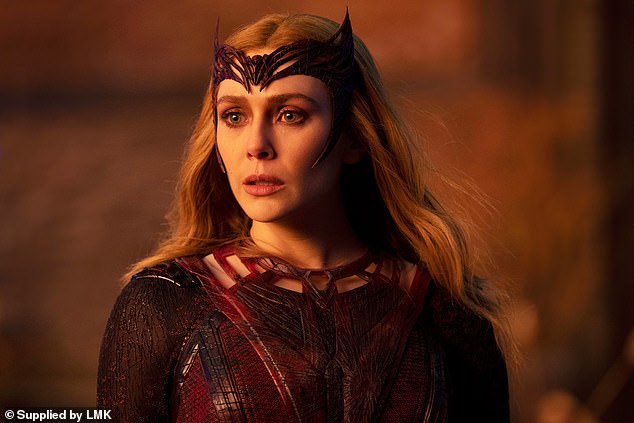 As one of the most complex female characters in the entire franchise, Elizabeth Olsen’s (above) Scarlet Witch is the best thing in this film by… well, a serious multiverse or three

But here – as Strange (Cumberbatch) and Sorcerer Supreme Wong (Benedict Wong) hurtle from one world to another with the help of their new, young universe-hopping friend, America Chavez (Xochitl Gomez) – it’s already looking old hat.

Michael Waldron’s screenplay may have a few nice lines, but it feels emotionally and structurally flat, while director Sam Raimi, who made all three of Tobey Maguire’s Spider-Man films, seems more interested in channelling his earlier Evil Dead franchise.

Frankenstein, Beetlejuice and Carrie are just three that come to mind as things take a turn for the grisly.

With one or two franchise favourites returning in alternate roles (this is the multiverse, after all) and a contrived-feeling cameo from X-Men star Patrick Stewart, you can see how hard Waldron and Raimi are working. 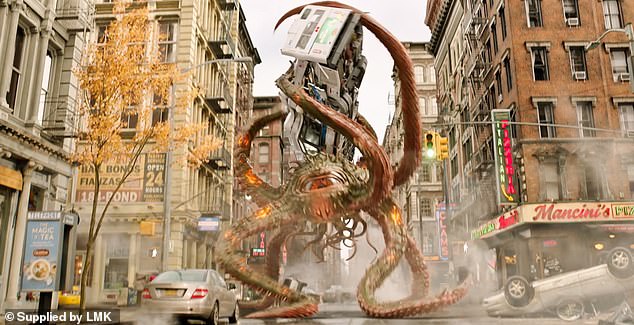 From a clunky opening to an early scene involving a bus-chomping octopus (above) that is pure Ghostbusters, one thing quickly becomes clear: this is no film for proper grown-ups

But with the American-accented Cumberbatch on unremarkable form and far too much talk of ‘dark-holds’ and ‘dream-walking’, I came out weary of endless visual effects and multiverses but full of new admiration for Olsen.

If you have to go and see it, go see it for her.

For those who found the muscles, machismo and sheer, er, Viking-ness of The Northman a little too much, let me recommend Wild Men, a slightly dark Scandinavian comedy that, among other things, pokes gentle fun at our new-found enthusiasm for bloodthirsty Norse marauders.

The film opens with an imposing fur-clad warrior hunting for food. But when he fails to kill a deer with his bow and arrow… he marches into a supermarket and tries to trade one of his furs for food. But they’re having none of it – it’s cash or card.

Martin’s midlife crisis, of which trying to live off the land is just the latest part, has had another setback.

From there we launch into a Tarantino-esque plot that sees Martin (Rasmus Bjerg) teaming up with a runaway drug smuggler, while they try to stay ahead of the pursuing police, the smuggler’s former accomplices and Martin’s furious wife.

What results is both funny and gently moving.

Eleven Days In May, co-directed by Michael Winterbottom, is a harrowing documentary about a series of Israeli air-raids on Gaza last year.

Some 60 children were killed in the raids and this deliberately graphic documentary names and pays immensely moving tribute to nearly every single one.

It’s tempting to look away. But as grieving siblings line up to talk about lost brothers and sisters, and parents quietly assemble little piles of their child’s favourite possessions, it seems more important than ever we don’t.