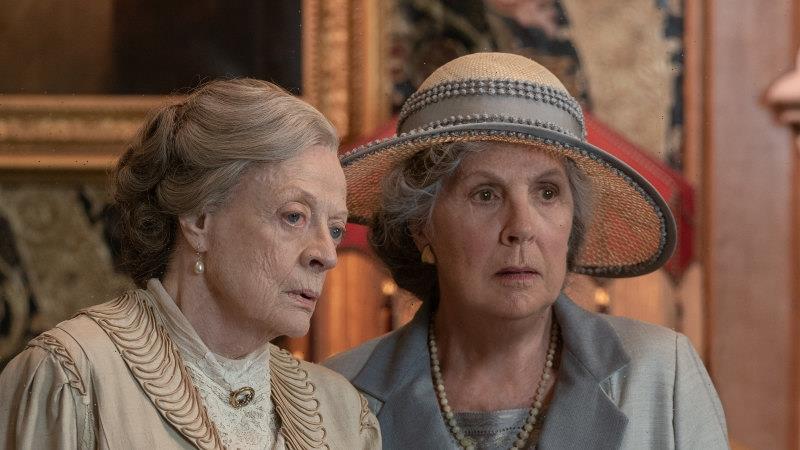 In Downton Abbey’s first excursion on the big screen in 2019, the upstairs and downstairs families battled the implacable forces of the Buckingham Palace bureaucracy in the lead-up to a visit from King George V and Queen Mary.

This time, they face an equally powerful but much more modern institution with an aristocracy all its own – the moving pictures. 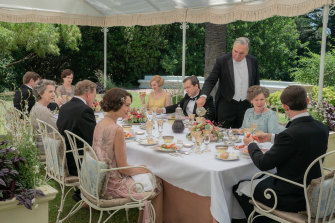 All the familiar faces have turned up for the occasion.Credit:Ben Blackall

A film is to be shot at Downton, a prospect that fills Hugh Bonneville’s Lord Grantham with revulsion. The place will be overrun, he snorts, “by actresses plastered in make-up and actors just plastered”.

Then, just in time, a diversion presents itself. His mother, Maggie Smith’s Lady Violet Crawley, receives the news she’s been gifted a villa in the south of France. Why? This question is a cue for Downton’s creator, Julian Fellowes, to introduce one of his most reliable plot devices, the long-buried family secret. A Crawley party sets out for the Riviera to find out more, leaving Lady Mary (Michelle Dockery) to watch over the film-making.

The mere fact Violet has fronted up for the sequel verges on a minor miracle. At the end of the last film, she was dealing with the revelation she probably had just a few months to live – news that would surely have pleased Maggie Smith herself. When the series finished in 2015, she told chat show host Graham Norton that she was glad that it was over, partly because Violet had to be about 110 by then and her continued good health didn’t make a lot of sense. Even on Downton’s rarefied plane of existence, immortality isn’t yet in the offing. 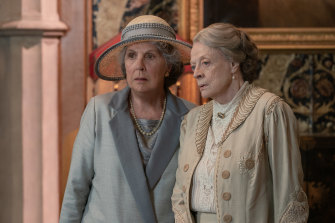 But here she is, saddling up again, ready to fire off a new quiver full of Violet’s characteristic zingers with all her old elan. Just before the film crew is due to arrive, she gives Mary a sage piece of advice. “Women like us,” she says, “fall into two categories – dragons and fools. You must make sure they think of you as a dragon.”

It’s hardly a necessary prompt. Mary’s sense of superiority has never been at risk, although she has mellowed over the years. At the end of the series, she married Henry Talbot, Matthew Goode’s handsome racing driver, despite his lack of a title or an estate. But he’s not in this film. A life of cars and international rally tracks is proving more alluring than Mary herself and he’s not coming home in a hurry, which leaves her perfectly positioned for a flirtation with the visiting film director (Hugh Dancy).

The divisions forged by money and class are Fellowes’ abiding obsessions and the film crew’s presence provides him with the perfect opportunity to shake up Downton’s hierarchies. The most imperious of the house’s new guests, for instance, is the film-within-a-film’s female lead, Myrna Dalgleish (Laura Haddock), a blonde glamour girl whose Cockney whine looks like killing off her career now that talkies are looming.

Downstairs Downton has been looking forward to meeting Myrna but her highly developed sense of entitlement proves an acute disappointment until unforeseen circumstances toss up a timely reminder that she and they speak the same language.

Music is an essential part of the Downton experience. That score, with its surging violins, speaks of good times in series gone by, but it can’t manage to smooth out the transitions between the home base and the south of France. They’re creakier than a housemaid’s knee. But once you arrive, the beauty of the villa and its blue and gold surroundings provide all the distractions you could wish for. We’re in an escapist’s paradise.

This is filmmaking by numbers, but you can’t really complain. It’s arranged around the need to give all the main cast members their moment in the sun, whether it’s shining on the Mediterranean or the lush lawns and fields of Downton. All the familiar faces have turned up for the occasion, embodying the nostalgic attractions of a shared history and working as one to ensure a sweetly elegiac conclusion with the usual shafts of wit undercutting the schmalz.