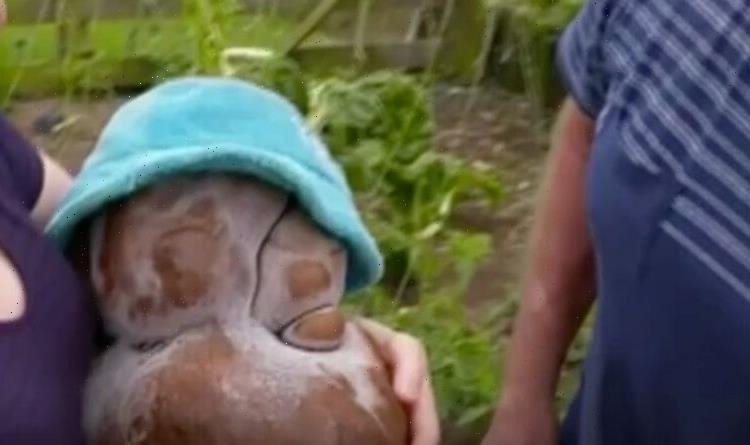 Alan Titchmarsh advises on how to plant chit potatoes

Named Doug, the vegetable grown by Colin Craig-Brown and his wife Donna on their farm in Hamilton, was so big it could wear a hat. The couple submitted photos and documents in a bid to support their submission to Guinness World Records, but last week they received the disappointing news Doug was no longer a contender.

The Science & Advice for Scottish Agriculture/SASA found a DNA sample taken showed the specimen was not a potato.

An email from the record-breaking reference book said: “[S]adly the specimen is not a potato and is in fact the tuber of a type of gourd. For this reason we do unfortunately have to disqualify the application.”

Colin and Donna named their find Doug because of the way it was unearthed.

The tuber became a local celebrity after the couple posted photos of it on Facebook wearing a hat. Colin even built a trolley to tow Doug around.

It weighed in at a whopping 17 pounds (7.8 kilograms) which is equal to a couple of sacks of regular potatoes or a small dog.

It was weighed at the National Gardening Show at the Royal Bath & West Showground in Shepton Mallet, Somerset, on September 4, 2011, according to Guinness World Records.

Colin said he was “disappointed” in comments made to New Zealand news website Stuff on Monday.

He said: “It’s been a real roller-coaster of potato-rama. We hopped on the roller-coaster eyes wide open and enjoyed the ride and this was the last real twist.”

Colin said the only logical explanation he could think of was that the seedling he bought was crossbred with a gourd and a cucumber.

The keen gardener quipped that the “potato” was their “happy little mistake of nature” in comments made to Stuff last year after discovering the monstrous tuber.

He added: “It’s a hideous looking creature. It’s the sort of thing that only a mother could love.”

The couple came across the giant while weeding their garden last year.

Colin joked at the time that if the record was confirmed, as a hobbyist home brewer, he would think about creating a special vodka with the giant vegetable.

Speaking of the confusion, Colin said it was a mystery to him why Doug grew so big and why it tasted as well as looked like a potato.

He said: “If it quacks like a duck, swims like a duck and has feathers on it, then it must be a duck.

“But nah – this one turned out to be a turkey.”

Undeterred, Colin said his hopes had not been crushed completely and he has been inspired to “get stuck in” and grow a record breaking spud.

He said: “I’m really gonna give it my all and have a go at growing the biggest potato in the world.”