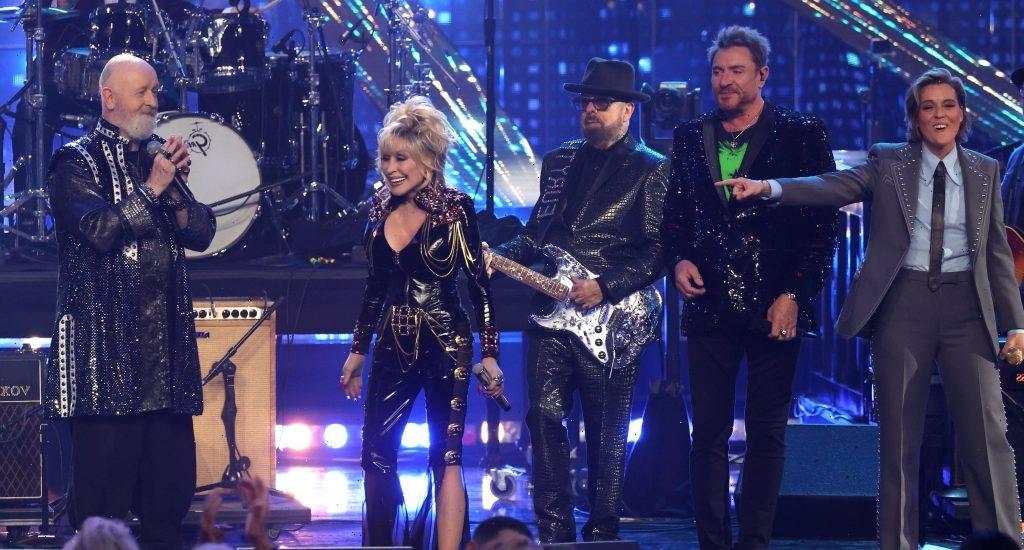 Although for official purposes all Rock and Roll Hall of Fame inductees are created equal, some are bound to loom larger than others when the rubber hits the road. And so, as much as hardcore fans of Duran Duran or Iron Maiden might have flooded into L.A.’s Microsoft Theatre in ordinate numbers for Saturday night’s ceremony honoring the hall’s class of 2022, it was always a foregone conclusion that the show’s all-star climax was going to revolve around the most culturally iconic of them all, Dolly Parton. If she showed up to accept, that is, but after some initial uncertainty about her willingness earlier in the year, there was no doubt that she would not only appear but be the belle of the country-rock ball.

Actually, the final moments of the five-and-a-half-hour show were devoted to a duet between Bruce Springsteen and John Mellencamp of Jerry Lee Lewis’ “Great Balls of Fire.” But that was more like a quick epilogue after a long segment devoted to Parton that included renditions by the superstar and/or other inductees and guests of “Jolene,” “9 to 5,” “Coat of Many Colors” and a brand new song she wrote especially for the occasion called “Rockin’.” Although other inductees on the bill noted that they had to condense their careers into an eight-and-a-half-minute performance time slot, that rule was hardly being strictly enforced for what amounted to a Dolly Fest before and after the clock struck 12.

The influx of guests for what appeared to be the show’s finale — a group-sing of “Jolene” — and the eclecticism of this year’s incoming roster of new members led to the sight of some strange bedfellows. As in: probably few people in history had considered the thought that Parton and Judas Priest vocalist Rob Halford would ever be singing harmony together. And the idea that even Duran Duran’s Simon Le Bon would be singing lines from “Jolene” had probably not crossed as many minds as it should have leading up to the show (which will be edited for its broadcast premiere on HBO Nov. 19).

Of course, there were less unusual suspects involved in the tribute segment as well, including Brandi Carlile, Sheryl Crow, the Zac Brown Bad and the woman who formally inducted Parton, Pink — prior to a “Jolene” that brought to the stage additional guests such as Annie Lennox, Dave Stewart, Pat Benatar and Neil Giraldo, along with Halford and LeBon.

In purely musical terms, the highlight of the tribute segment was also its simplest — a sublime duet between Carlile and Pink of one of Parton’s signature storytelling ballads, “Coat of Many Colors.” The energy ramped up a bit from there as Crow and the Zac Brown Band (which provided backing for the entire sequence) teamed up for “9 to 5.”

As the clock wound down on that cover, Parton got howls of appreciation as she reappeared on the stage with an electric guitar in skintight black that was clearly meant to signify: Dolly Parton, Once Reluctant and Now Unabashedly Enthusiastic Rock Chick. “And you thought I couldn’t rock!” she exclaimed. “I figured if I’m gonna be in the Rock and Roll Hall of Fame, I’m gonna have to earn it,” she explained, before busting out a new song with freshly minted lyrics that contrasted her rural Tennessee upbringing with the early days of rock: “I grew up loving Elvis and wild man Jerry Lee / Chuck Berry and Little Richard, they all cast a spell on me / Carl Perkins in those blue suede shoes had no place on the farm / But they was better than those I was wearing around the barn.”

The new “Rockin’” song also included lines about her not going for what her country preacher said about “that devil music, it’ll send you straight to hell / It sent me straight to heaven.” The chorus vowed, “I’ve still got rock ‘n’ roll down in my country soul / And I’ll be rockin’ it till the cows come home.” Naturally, though, the biggest whoops came for timely lines in the last verse that included: “Country’s in my veins / But since I heard the news, I ain’t never been the same… / They done gone and put me in the Rock and Roll Hall of Fame.”

In her introductory speech, Pink praised Parton by saying, “There are few finer songwriters, male or female, that have ever lived… She’s one of the greatest storytellers of her time – of any time.” The speech cited her as a writer skilled in evoking “what it’s like to be human and what it’s like to be a woman in America,” with specific themes and songs called out, like “poverty, shame, the cruelty of bullying and love for her mama” in “Coat of Many Colors,” suicide in “The Bridge,” trauma over a stillborn child in “Down From Dover,” and of course, writing the “number one most selling song of a female for all time, ‘I Will Always Love You.’ Apparently she wasn’t exhausted after that sheer genius, because on the same night, she wrote ‘Jolene.’ Show-off!” Pink talked about her philanthropy in giving 150 million books to children, among other good work, but seemed particularly obsessed with other aspects of Parton’s persona. Like: “She plays the guitar with long, talon-like fingernails and never misses a note.” And: “Who here has a hologram of themselves at their very own amusement park?”

Parton, not surprisingly, devoted much of her speech to further explaining why she tried, in vain, to turn down her nomination after it came in, only to be told by the Rock Hall that voting was already underway, and that she’d get into the hall whether she wanted it or not, if voters decreed it. They did, of course, but well before the final verdict came on, Parton had a change of heart, saying she really had not understood that the Hall of Fame already has plenty of members from genres adjacent to rock.

“I’m sure a lot of you knew that back when they said they were gonna put me in the Rock and Roll Hall of Fame, I didn’t really feel like I had done enough to deserve that. And I didn’t understand at the time that it’s about a little more than that,” she said. “But I’m just honored and so proud to be here tonight. … When I always thought about the Rock and Roll Hall of Fame, I thought that was just for people in rock ‘n’ roll!

“And I thought, well, if I’m gonna be in (it), I’m gonna have to do a rock album, because my husband of 56 years is a huge rock fan. And all through the house he has music louder than this going on at all times. He’s always said, “You should do a rock album.” And I thought about it a few times, but timing is everything. And then when this all came up… I thought, well, since I am gonna be in the (hall), I’m gonna write a song for tonight, which I’m gonna sing in a minute, kind of telling my story about how I felt about it. “

Anticipating that pledge to do such an album, she asked, “Are any of you rock stars gonna help me out on that? Good, because I’m gonna hold you to it. … I’m just honored to be part of it and have all the friends here tonight that are going into the Hall of Fame with me. So I just feel proud to be here, as Minnie Pearl would say.”

Later, as much of the cast from the night lined up for the cluster-singing of “Jolene,” Parton surveyed her immediate landscape and continued to establish herself as both part of the inductee gang and something separate and different. “We got a star-studded stage up here, don’t we? I feel like a hillbilly in the city.”