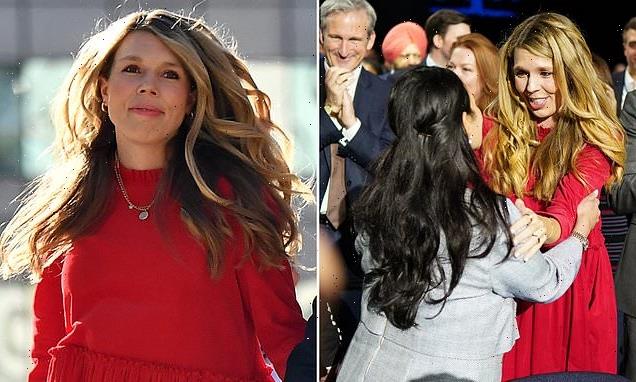 Do Carrie Johnson and Priti Patel share the SAME hair stylist? PM’s wife and Home Secretary both opt for ‘contemporary-boho’ hairdos to create a ‘relaxed, but polished look’ at Tory conference

Carrie Johnson and Priti Patel have sparked speculation that they have the same hairstylist after arriving at the Tory Conference in Manchester with a similar ‘do.

The 33-year-old, who is expecting her second child with the Prime Minister, wore her blonde hair in loose waves which fell delicately onto her flowing scarlet frock by independent label Cabbages & Roses.

And if it wasn’t for Home Secretary Priti Patel’s darker shade of locks, their very similar hairstyles could’ve caused anyone in the Manchester Central Convention Complex to do a doubletake.

Speaking exclusively to FEMAIL, celebrity hairstylist James Johnson noted how the duo showcased the ‘same pretty, loose waves’ which they may have chosen because it doesn’t look ‘too formal.’ 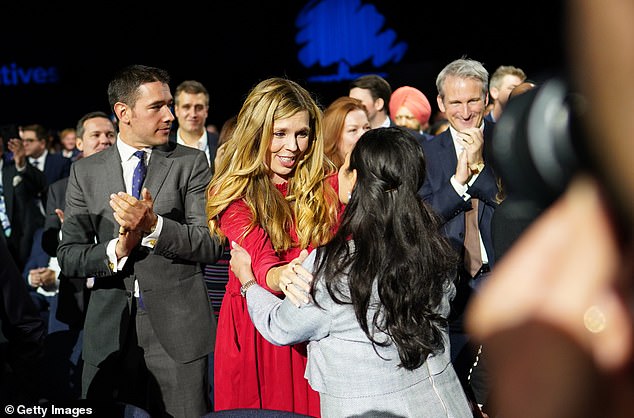 Carrie Johnson and Priti Patel have sparked speculation that they have the same hairstylist after arriving at the Tory Conference with a similar ‘do. 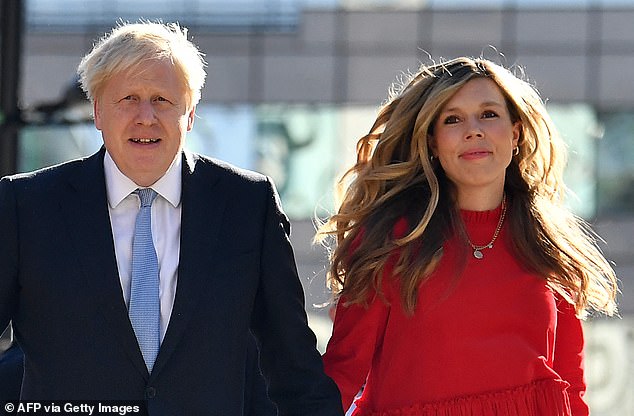 According to celebrity hairstylist Jason Collier, Priti and Carrie both opted for a  ‘contemporary-boho style and shape’

‘Both of them had a similar hairstyle, with a contemporary-boho style and shape,’ he explained. ‘It is quite possible that they could have been done by the same hairstylist in my opinion. Both were showcasing an easy, relaxed style, but still polished and put together, meaning business.’

Ricky Walters, Director of SALON64, also went on to note how Priti, 49, and Carrie ‘certainly have looked at one another when deciding hair inspiration.’

He explained: ‘The loose waves that have even dropped at the same rate with half pinned back is certainly the calling card of the same hairdresser!

Perhaps a lovely group session where they can catch up with the rollers in? Or maybe even a two-for-one deal?’

The hairstylist went on to note how both ladies clearly have super thick incredible hair that needs a blowdry that lasts. 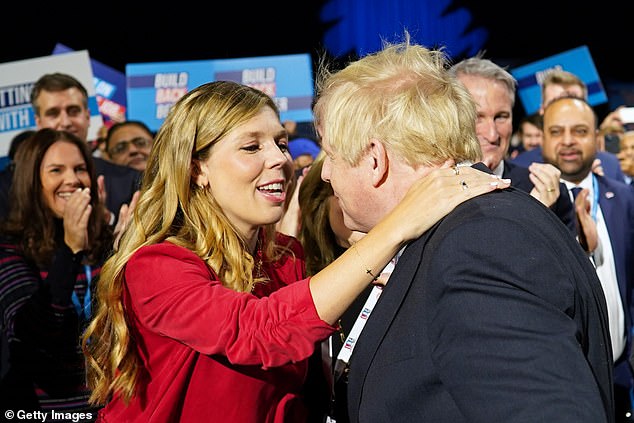 Carrie Johnson, who is expecting her second child with the Prime Minister (pictured, together), wore her blonde hair in loose waves which fell delicately onto her flowing scarlet frock

‘They have had their blow dried smooth and curled with a curling iron before being loosely brushed out,’ he explained. ‘Nothing beats having your hair blow dried with your bestie. Although I don’t always recommend rocking the exact matching look, this pair have pulled it off.

This could just be the start of an even tighter partnership where the ladies can even start shopping together and dress the same. Who knows?’

Sarah McKenna, Founder of Vixen & Blush, praised the ‘effortless style’ seen on both Priti and Carrie for being one that flatters all face shapes, hair types and lengths.

‘Whether you opt for a pinned up style like Priti or leave your waves loose like Carrie this is a trend that is versatile, and you can make your own,’ she added. ‘My top tip for achieving this look would be to finish off your styling with dry shampoo to add texture and a drop of hydrating oil on the ends to keep the hair healthy.’ 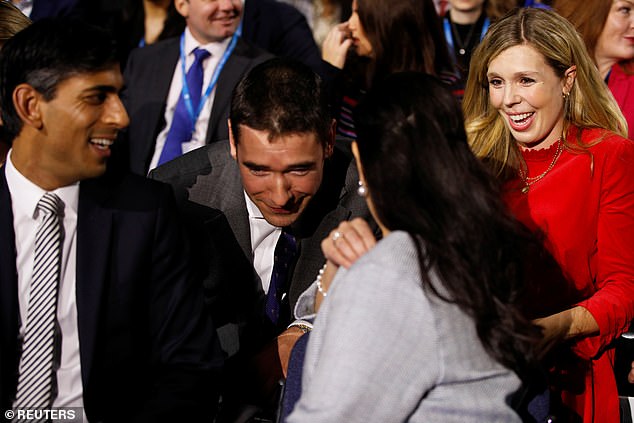 Carrie Johnson, Home Secretary Priti Patel and Britain’s Chancellor of the Exchequer Rishi Sunak sit on the conference floor ahead of the PM’s speech during the annual Conservative Party Conference in Manchester on October 6, 2021

According to Jason Cocking and Chris Baker, 4 Theatre Square Hair, in Swindon, the hairstyle on both women, who are often known for their ‘direct approach,’ is more of a ‘softer look.’

‘I love that they’ve chosen a softer look for their hair, it makes them instantly more approachable and shows a softer side to them,’ they explained.

However, the pair went on to say that despite the duo’s look being similar, it’s more likely they used a similar tool rather than the same hairdresser.

‘These women are on the go and often due to their schedules, they don’t have time to visit the salon,’ they said. ‘The finish of their hair doesn’t look as sleek and as styled as it would be if a hairdresser had styled the hair. I think that both women have styled their own hair using a similar tool.’