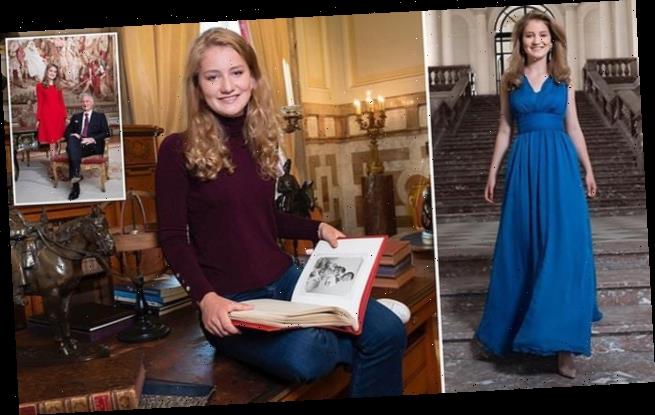 Crown Princess Elisabeth of Belgium will celebrate her 18th birthday live on the nation’s TV in an unprecedented move usually reserved for royal weddings and funerals.

Elisabeth, the Duchess of Brabant, will be heading to the Royal Palace of Brussels from her boarding school in South Wales for the ceremony on Friday.

The rare and historic broadcast, which will be available on three main TV channels in the country, is to mark the heir to the Belgian throne becoming old enough to rule without a substitute regent being appointed.

As the first child of King Philippe and Queen Mathilde, Elisabeth – who has three siblings; Princess Eleonore, 11, Prince Emmanuel, 14, and Prince Gabriel, 16 – is first in the line of succession to the Belgian throne. 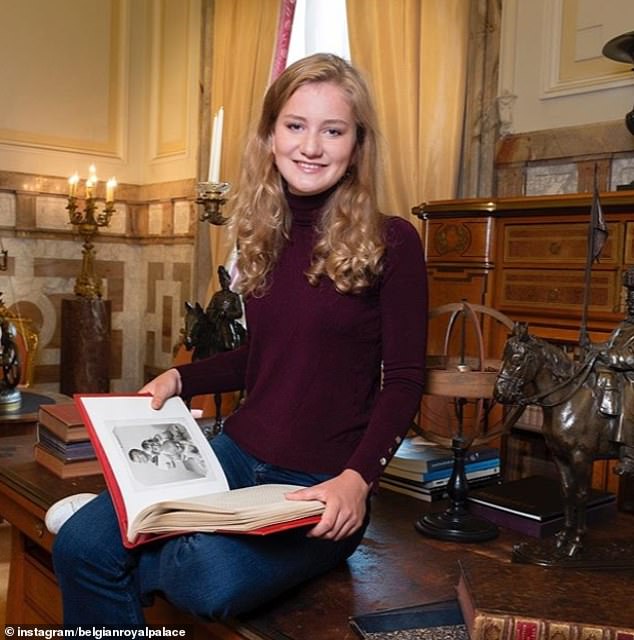 Crown Princess Elisabeth of Belgium poses at her home, the Royal Palace of Laeken, to mark her 18th birthday. A ceremony for the occasion will be live on the nation’s TV on Friday 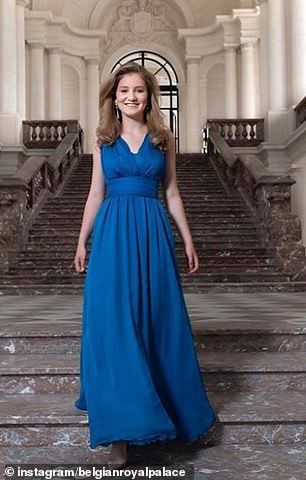 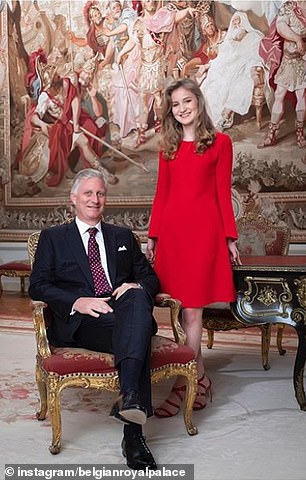 One image showed her in an elegant blue gown standing on a set of grand steps found in the Royal Palace of Laeken, where her parents live, while another captured Elisabeth with her father Philippe, who acceded to the throne on 21 July 2013

During the momentous occasion tomorrow, Philippe will give a speech ahead of performances by Eurovision singer Blanche – who came fourth in the singing contest two years ago – and the Royal Ballet School of Antwerp.

The invite-only ceremony will then see five teenagers – two Dutch, two French and one German speaker – express their dreams for the future and what they’d like from the future head of state.

They were selected after the palace asked youngsters to send in letters that they’d like to read to the princess. 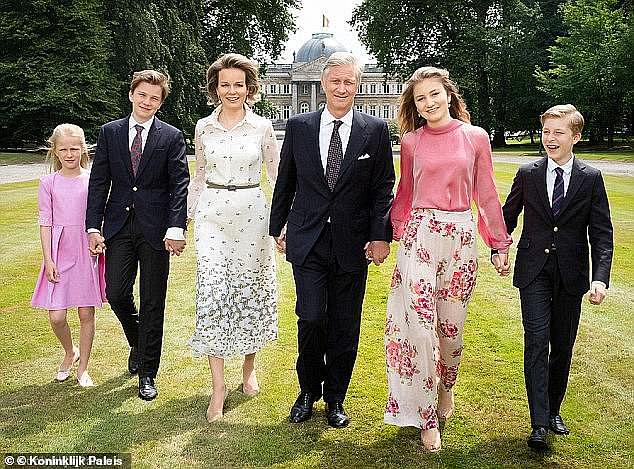 As the first child of King Philippe and Queen Mathilde, Elisabeth – who has three siblings; Princess Eleonore, 11, Prince Emmanuel, 14, and Prince Gabriel, 16 – is first in the line of succession to the Belgian throne. Pictured: The family together 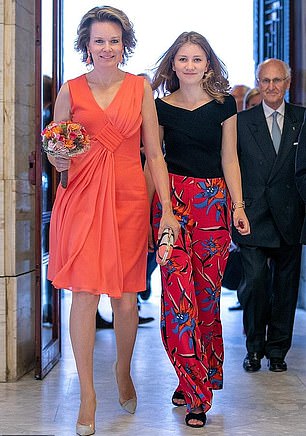 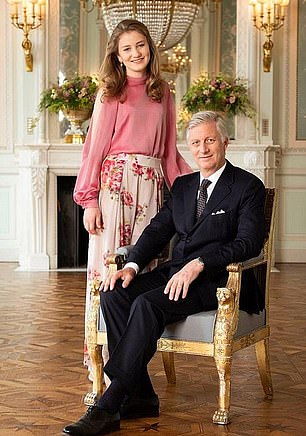 Princess Elisabeth, left, with her mother Queen Mathilde of Belgium on May 12, 2018 in Brussels, and right, with her father in July 2018 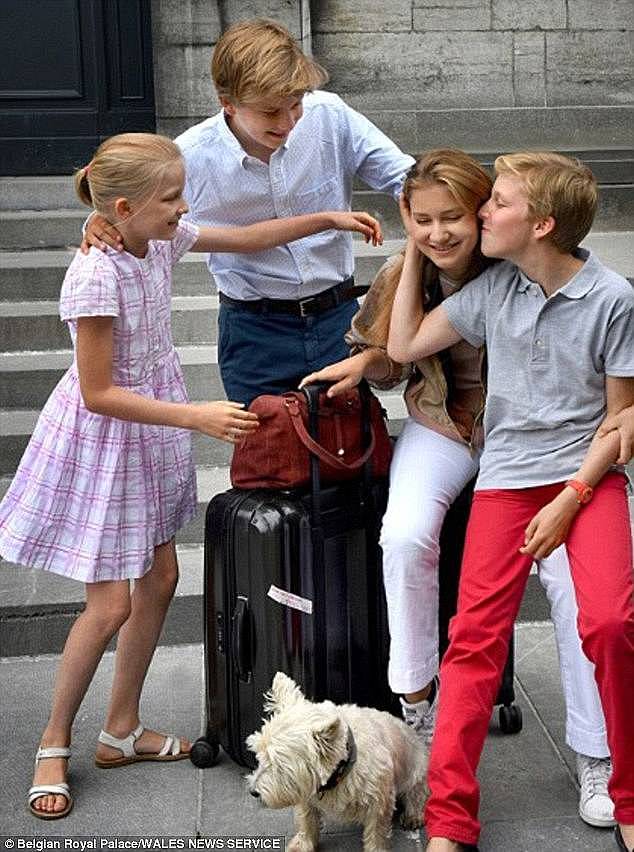 Princess Elisabeth says goodbye to (left to right) her siblings Eleonore, Gabriel and Emmanuel at the royal palace of Laeken in Brussels before heading to Wales to study in 2018

Eighty people born in 2001 also received an invitation to the one-hour long event, which will see politicians and fellow royals attend.

‘For Elisabeth it is not only important that she celebrates her birthday with peers, she also wants to give her generation a voice,’ a royal source told local media.

The young royal will then take to the floor herself in front of hundreds of guests and a live television audience.

Usually, a live broadcast of a royal event in Belgium is reserved for weddings and funerals – unlike in the UK where the Queen’s Trooping the Colour parade for her birthday is aired on TV. 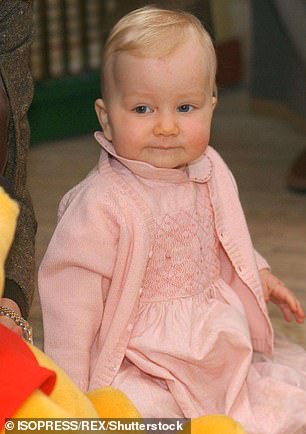 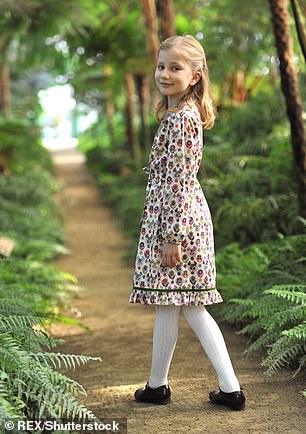 The first birthday of Princess Elisabeth on 25 October 2002, pictured left, and the princess on her 10th birthday, right 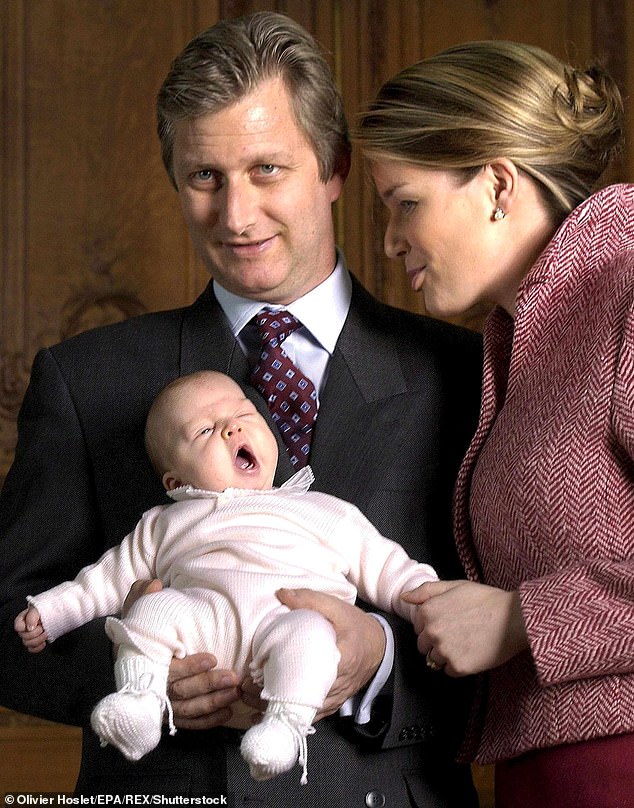 Princess Elisabeth yawns while she poses with her parents Philippe and Mathilde for a family picture on January 8 2002 at the Royal Palace in Brussels, Belgium 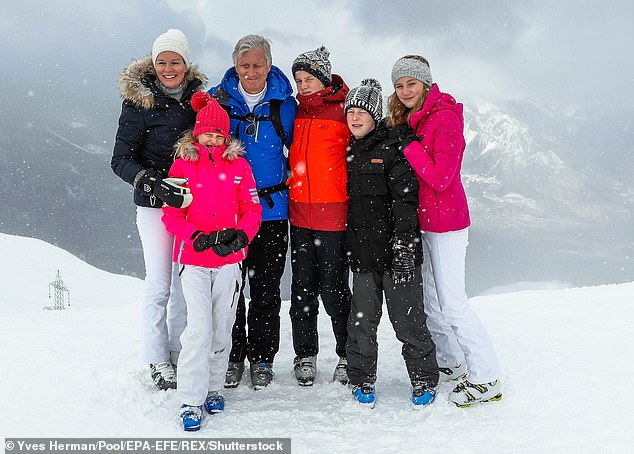 Mathilde, Eleonore, Philippe, Gabriel, Emmanuel and Elisabeth pose for a family picture during ski vacation in Verbier, Switzerland, on February 12 2018

The last royal occasion to feature on Belgian TV was the funeral of Queen Fabiola in December 2014.

On Wednesday, a selection of images, taken by photographer Michel Gronemberger, were published by the palace to celebrate Elisabeth’s birthday.

One showed her in an elegant blue gown standing on a set of grand steps found in the Royal Palace of Laeken, where her parents live, while another captured her sitting at a desk holding open a photo album.

The third and final image showed Elisabeth with her father Philippe, who acceded to the throne on 21 July 2013 after his father Albert II abdicated for health reasons. 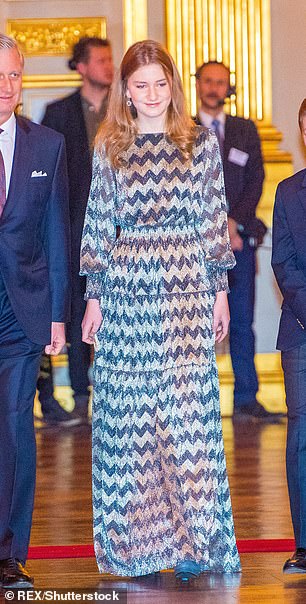 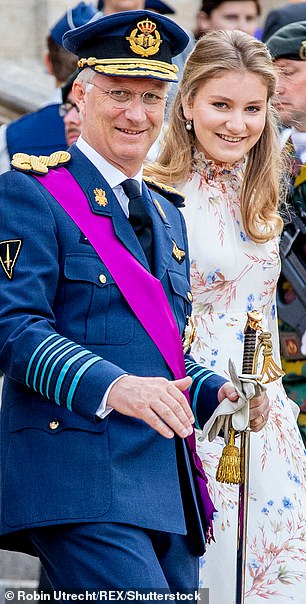 Elisabeth during the annual Christmas Concert in Belgium in 2018, pictured left, and right, with her father this July 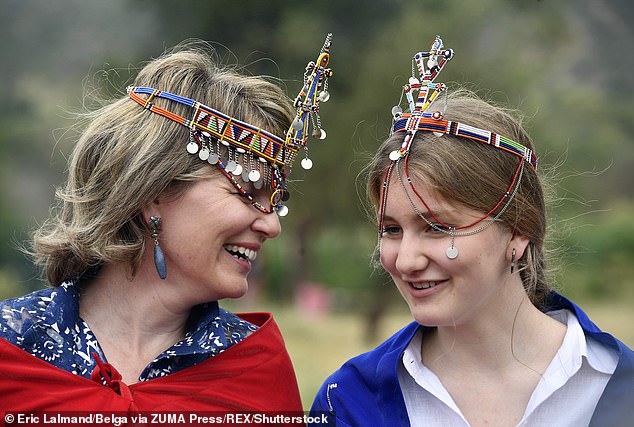 Queen Mathilde, honorary President of Unicef Belgium, and Princess Elisabeth during a three day to Kenya in June this year 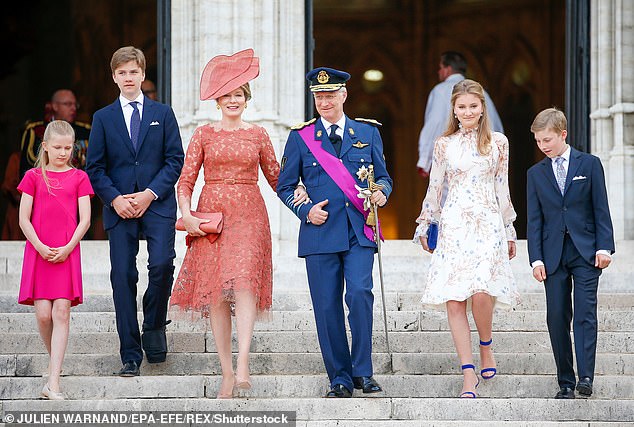 Elisabeth, who was born in Anderlecht on 25 October 2001, attends the United World College of the Atlantic (UWC) in Wales and enjoys playing tennis, skiing and spending time with her friends.

She also gave her name to the Princess Elisabeth Antarctica Research Station and on 6 May 2015 she became godmother of patrouilleur-ship P902 Pollux.

Elisabeth lives with her parents, her brothers Gabriel and Emmanuel and her sister Eléonore at the Royal Palace of Laeken, and will be returning there for a private birthday celebration after the ceremony.

On the Belgian royal website, it says the princess volunteers to help children with learning difficulties, the elderly and the homeless.