Alex Walker was choleric. Vociferous. Umbrageous. Damn, Alex was cranky. The bugbear was a rarity in my so-called quick crossword. “Vernissage? Really, David? I know it’s a word but had never seen nor heard it before.”

To spare your blushes, or your Googles, vernissage hails from painting. Its root is varnish in French. Picture a portrait needing one more layer, an overcoat to protect its brushwork from the public glare. That’s your “vernis”. Roll it on.

As it sets, invite the glitterati to swill bubbly before the plebs intrude. Hence a vernissage is an exhibition’s preview, or day one of the exhibition itself. Rest assured, if you score a vernissage invite, then you’ve well and truly arrived. 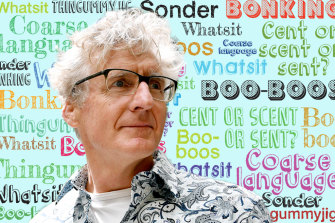 “Really, David? I know it’s a word but had never seen nor heard it before,” wrote my displeased correspondent.Credit:Jo Gay

Not that Alex was so chuffed. “I do the cryptic every day except Fridays. But with answers like vernissage, Friday’s “quick” is anything but!” In my defence I championed the new. For every drab palette of vocabulary, a crossword should add the odd palanquin, a blob of pernicious, a swirl of turpitude.

That’s the brief, surely: to extend a solver’s word-hoard as much as to affirm what words they already carry. Granted, you won’t use vernissage too often in your life, but it’s worth preserving. Thanks to a puzzle, a Wordplaycolumn, you now can caption a bunch of A-listers milling a gallery amid a lacquer miasma.

Such thoughts flitted through my brain as I sat in Matilda’s garden shed a few months back. Sitting still wasn’t easy; the draught from the patchwork drape tickled my neck. Matilda Michell is a painter, the shed her studio, filled with Goya and Rembrandt books, still-life fruit and jam jars of dirty water.

“Five more minutes,” she promises. I hold a Herald against my chest. The portrait is meant to evoke a hostage scenario, a proof-of-life snapshot where the captive holds the day’s paper, excepting I’m as much a prisoner of the crossword grid in my actual life: a meta-joke about frames locked inside frames.

Vernissage, naturally, is a word that occurs to me, elicited by the turpentine reek. Another is expatiate, a fancy cousin of explain. This last curio comes courtesy of Lexicon Valley, the podcast streaming in my ears, an oral essay by US linguist John McWhorter that’s helping me to keep still.

Simple words, the words we use every day, belong to “the Rice Krispie vocabulary”, as McWhorter puts it. Basic stuff — the verbs and nouns we pour like cereal. “Then there are other words you might not learn as an outsider for a long time, if ever.”

McWhorter calls them ceremonial words, the language of initiation (into a subculture, a trade, a discipline). Examples such as vernissage or expatiate, tend to occur during ritual, rarities that “might be at funerals or in formal speeches”. Or maybe in essays and crosswords, adding to your hoard. 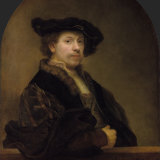 Even Rembrandt, shown in his ‘Self Portrait at the Age of 34’, can teach us a new word.Credit:The National Gallery, London

Matilda, in fact, teaches me a word during our session. Like vernissage, it stems from Rembrandt’s domain. Scroll the master’s works and you’ll see evidence of houding – or the artful evocation of space. Houding means attitude in Dutch, using a plane of light to capture Bathsheba’s languor, the draper’s vanity, the ceremonial blaze of Rembrandt’s own ruffe.

Indeed, houding accounts for Matilda’s patchwork drape. The curtain mimics an advent calendar, each cloth square bearing a Velcro tab. Tear one open and a ray of sunshine will laser the studio, a trick of light Rembrandt himself pioneered. Deep vocabularies can lend you that subtlety, that precision, a focal nuance to pinpoint a detail, be that a painter, a podcaster or a crossword-maker who happens to enlighten you.