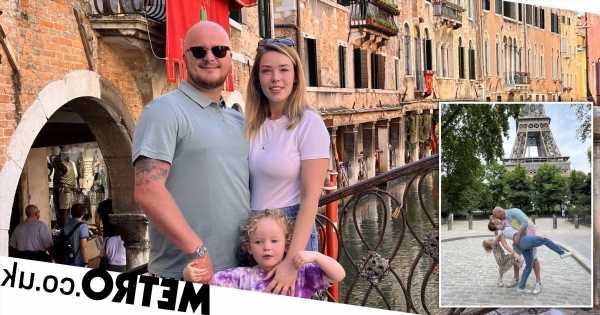 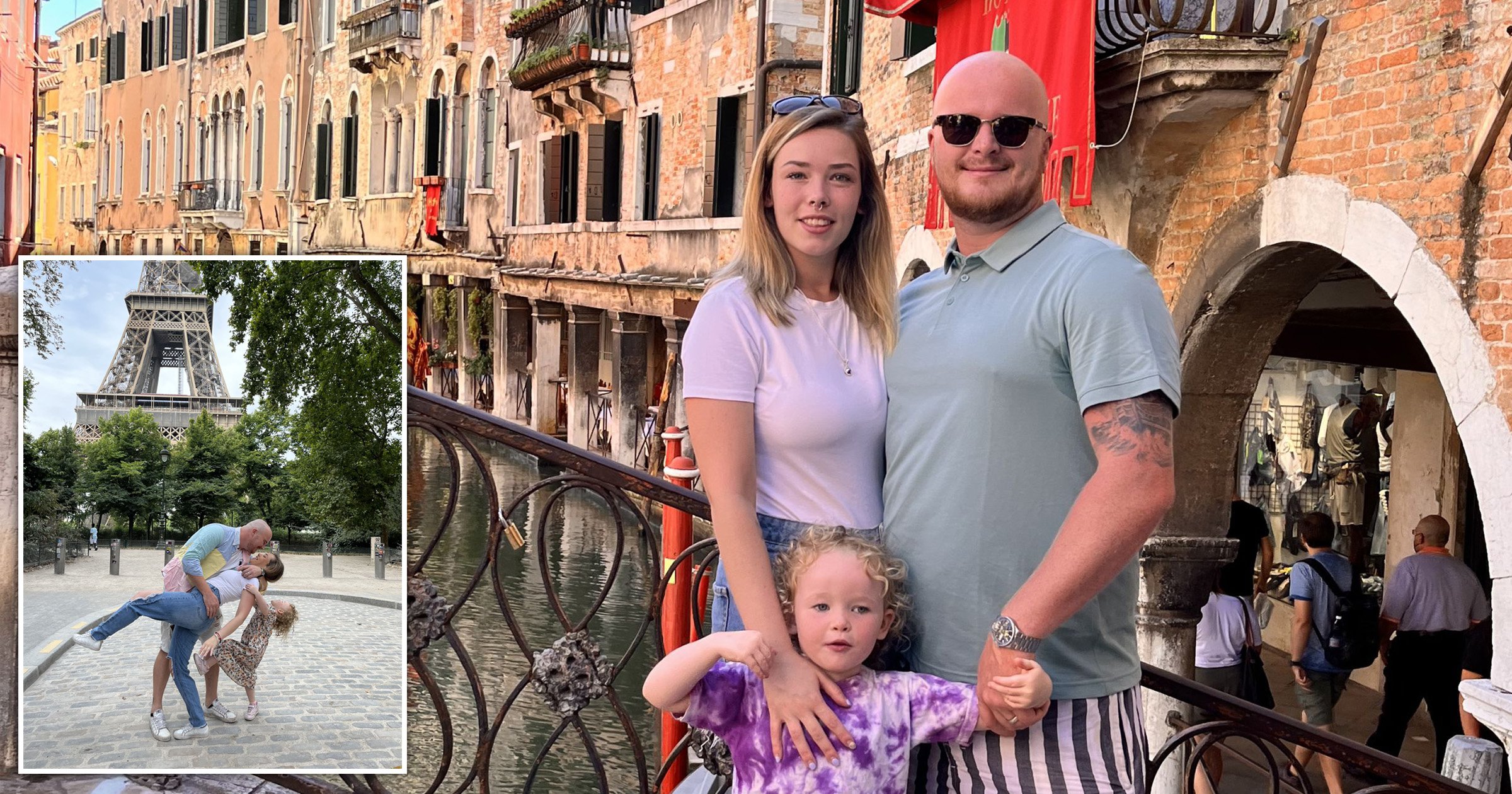 A couple have said goodbye to their ‘WFH rut’ and sold their £300,000 home to travel the world with their daughter.

After growing increasingly unhappy with working as a health and safety advisor during the Covid lockdowns, Joe Riley, 27, and fiancée Rachael Lewis, packed it all in a chose globe-trotting instead.

Rachael wasn’t initially keen on travelling, but the 24-year-old former waitress was persuaded after a solo weekend trip to Paris in back in January – the first time she’d left the country.

The couple decided to flog their four-bedroom home in Heysham, Lancashire, in May, and jetted off with daughter Melody Riley to their first stop, in Bali.

After that, the family went to Thailand before spending the next few months exploring Europe.

The couple have shared tips on TikTok that show the family feeding elephants in Thailand, visiting breathtaking temples and relaxing on palm beaches.

Joe, from Heysham, Lancashire, said: ‘I really fell into a rut while working at home, so we just looked into how to spice things up and this trip was top of the list.

‘I’ve travelled with my family and spent some time living in Dubai, so I’ve always enjoyed travelling.

‘We initially had an argument about the idea at first, but when she came back from Paris, she’d caught the travel bug.’

Rachael explained that her initial reservations were down to the fact that owning property was her ‘idea of success’.

She said: ‘I still have dreams about how much I loved the kitchen in my house.

‘I came from a council estate – I never thought I’d be able to own my own home, never mind sell my dream home.

‘We got a bit of backlash on TikTok when we said we sold the house.

‘I felt like I had to justify myself and said “actually, we’re quite sensible, we’ve put enough aside for a deposit on a new house when we get settled”.

‘We’ve both worked since we were really young, so we have good savings.

‘After two years of lockdowns and COVID, we were just really excited to have the opportunity to do what, deep down, we’d always wanted to do.

‘We’ve always wanted to travel, ever since we’ve known each other. We want to move to Australia – that was the goal for us.’

The family went for a short jaunt in May before pulling the plug on their life as they knew it.

Rachael said: ‘We went to Milan on May 17 for three days.

‘Melody had never been on a plane before and I was really nervous about how she’d deal with flights.

‘I guess it was a little practice. We came back from Milan, had our goodbye parties and then went off to Bali for a month.’

After Bali, their travels through Europe saw them staying either in Airbnbs or with friends.

Joe said: ‘I’m always on the lookout for good deals on Airbnb. There are days where we’ve been travelling and have had to book something that same day.

‘I can’t even imagine how much we’ve spent travelling the world. It’d have to be up there in the high tens of thousands.’

Rachael said: ‘We’ve been travelling around Europe for three months. We went to France, Italy, Germany and Switzerland.

‘It was mainly by train, so we got to see a lot of it, it was lovely.

‘Germany is my favourite country that we’ve been to so far, we were hosted there by a couple we’d met in Thailand.

‘They showed us all the beer gardens, and we got to see the Alps, it all blew my mind.

‘The people and culture were amazing. It felt amazing to be treated like family – it was very homey.’

‘I think my favourite memory so far has been when we took Melody to the waterfalls in Bali.

‘There was a moment when she jumped into her dad’s arms while he was in the water, she was quite scared at first. It was one of those moments I don’t think I’ll ever forget.

‘The number one comment I get is “you should have done this when she was older so she’d remember it”.

‘What I want to drive into people’s minds is that I don’t care if she remembers it or not, I care that she’s experiencing it in the moment.

‘She’s feeling and collecting all this knowledge, consciously or not. I’ll remember all this quality family time we’ve spent together.’

Even though it’s not all plain sailing, the family don’t regret taking the plunge.

Rachael said: ”I get so many mums who say “I want to do this with my kids”. But then I get some people calling us selfish or asking about our finances.

‘People also asked about Maddy’s schooling. She’s only four, so she isn’t yet at an age where she needs to worry about that, I home-school her in the meantime.

‘We also get a lot of people saying we’re taking Melody away from friends and family.

‘They don’t realise that when we lived in Heysham, we weren’t geographically close to our friends and family.’

The couple don’t plan on travelling the globe forever – ultimately, the goal is for them to put down roots in Australia.

Rachael said: ‘We’re going to be in Bali until we can figure out how to move to Australia.

‘Australia has always been the end goal. Whenever I picture the life I want to have it’s there, by the beach, with good schooling programs and sports.

‘We’re currently in the research stage of piecing together bits of important information. We’ve got Melody and her future schooling to think about.

‘We’re going to go back home, spend one last Christmas in the UK and then hopefully in the New Year, we’ll be closer to getting our visas.’