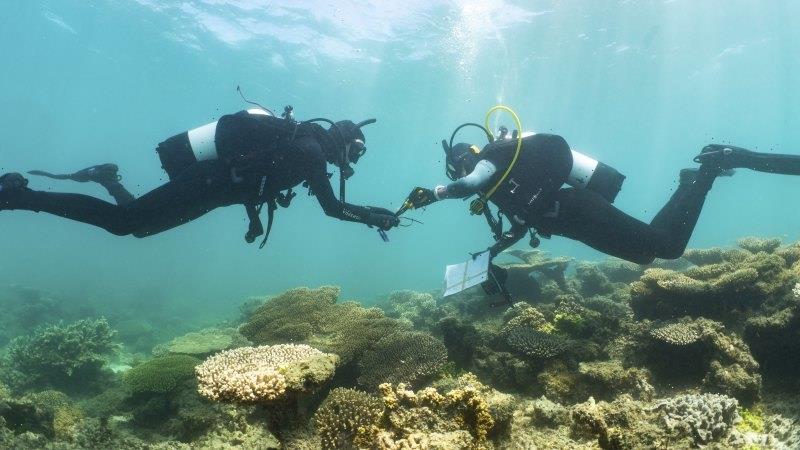 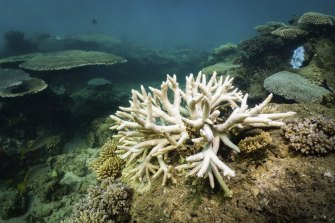 Bleaching was observed at Bundegi in the Exmouth Gulf in late March.Credit:Blue Media Exmouth

As the Great Barrier Reef in Queensland suffers through a mass bleaching event, marine scientists in Western Australia have had their fingers crossed that the state’s stunning corals do not suffer a similar fate.

The whitening of corals – often triggered by warmer waters as coral is stressed, loses its colour and become more susceptible to disease – was observed late last month across hundreds of kilometres from the Kimberley down to the Exmouth Gulf.

A wait and watch approach has been taken to see whether there will be any widespread bleaching but water off the Pilbara and Kimberley coast was not expected to cool down until May – with March and April traditionally the hottest months.

Regular coral bleaching is the new normal for WA and scientists now pray for cyclones, which, while destructive for reef structures, can lower ocean temperature which can have less of an impact compared to marine heatwaves. 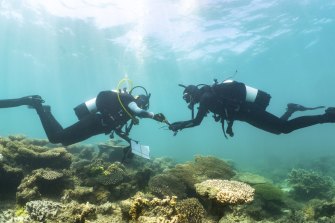 Research is turning towards genetic studies of corals which show greater heat resilience that could be possibly be used to replace reef that has been lost or intervene in declining populations.

There is a time limit on the work with sea temperatures expected to be 1.5 degrees higher than pre-industrial levels some time after 2030, which will put pressure on reefs that need multiple years to recover from bleaching events.

All have WA’s coral reefs have bleached at least once since 2010. In 2016, during an El Nino year when there are historically warmer waters, there was a reduction in coral cover and bleaching at northern locations like Christmas Island, Ashmore and Scott Reef as well as inshore at the Kimberley.

Further south Ningaloo and Pilbara reefs, seagrass and kelp forests copped a beating in 2011 during a La Nina year – which occurred in both 2021 and 2022 resulting in heavy rainfall and flooding on Australia’s east coast – as the Leeuwin Current intensified and brought warm waters south.

Kelp forests, which also store large amounts of carbon, off the coast of Kalbarri were mostly wiped out along a 100-kilometre stretch that marks the northern fringe of the Great Southern Reef. Other than some protected pockets the forest has not grown back in the impacted area.

Now there is bleaching of northern WA reefs during La Nina as well as the Great Barrier Reef – which had not experienced mass bleaching during the weather phenomenon before.

Australian Institute of Marine Science coral ecologist James Gilmore is based in Perth and is part of the WA Coral Bleaching Group that puts out regular alerts on possible bleaching events.

He said in the last five years water temperatures had been persistently high.

“Our climate is changing and with that change, it makes it so much more difficult to predict what will happen,” Dr Gilmore said.

“We do have a situation where temperatures are routinely close to one degree above normal.

“When we push towards two degrees above normal for weeks that becomes a big problem for coral bleaching.”

Last year, also a La Nina, the waters around the world heritage-listed Ningaloo Reef were warm but local conditions came together so that bleaching was not widespread.

In the past two weeks moderate bleaching was observed at Bundegi Reef in the Exmouth Gulf, which is adjacent to Ningaloo and lies between the North West Cape and the mainland.

But a coastal low has also recently drifted past the region with more than 100 millimetres of rain dropping in Exmouth on Thursday night.

Dr Gilmore said scientists were still resigned to bleaching generally in the future and were more concerned these days about whether there would be mass events which killed large amounts of corals.

“We sit and wait and hope for tropical lows and cyclones to cool things,” he said.

“We’ve become a little bit complacent about background bleaching or heat stress and hope for things like cyclones to come through and reduce bleaching.”

Reefs in WA need about five to 10 years to recover from bleaching.

But by 2049 bleaching could be happening in places like the Ningaloo Reef every year.

“There’s a clear pattern. Whether it’s catastrophic this year or not the trajectory is clear,” Dr Gilmore said.

“There are a bunch of intervention and restoration activities proposed.

“You have this incredible pressure to find something that will be useful and implement it.”

For the past few weeks, a group of marine scientists and students from UWA and AIMS have been out on the Ningaloo Reef for its spawning season.

Coral spawning at WA’s Ningaloo, unlike the Great Barrier Reef, takes place during the warmer months in the water around Autumn.

The researchers were collecting samples of the coral species Acropora tenuis, which is made up of stony-like branches, to take back to the Minderoo Foundation’s recently opened Exmouth Research Laboratory. 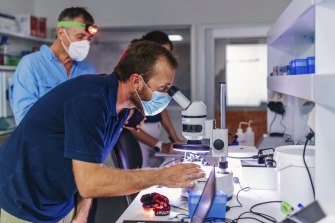 AIMS and the UWA Oceans Institute lead researcher Luke Thomas said one of the glimmers of hope for reefs was the variation in coral species.

“Certain individuals seem to be tougher than others,” he said.

“We’re trying to figure out what drives this natural variance in fitness and how we can harness it to safeguard the reefs.”

The lab has allowed for highly controlled experiments to take place in the Exmouth for the first time, with marine scientists focused on trying to find samples of coral that show good heat resilience.

As part of the project the collected coral spawned under lab conditions.

“We’re really excited to see the success in spawning Ningaloo corals for the first time [in the lab],” he said.

The resulting larvae will be heat-tested with the surviving samples to undergo whole genome DNA sequencing to discover what drives this attribute.

“There’s no such thing as a super coral, there will be a trade-off,” Dr Thomas said.

“They might be temperature tough or grow slow or have lower reproductive output. So understanding these basic questions in terms of restoration is important.

“The next step we’re taking at Minderoo research lab is how do we incorporate this into restoration activities.

“Trying to restore a degraded reef, you don’t want to put out coral that will bleach and die.”

Knowing which coral samples are robust will mean scientists can focus protection in the wild on the most resilient sites as the ocean warms.

The research will also help develop tools for rapidly screening corals to find colonies with particular desirable features that can be cross-bred.

Another possibility will be finding a tough but fast-growing specimens that could be used to reconstitute reefs like the one at Bundegi, which saw a lot of coral cover lost to cyclones, with a project set to be launched late this year with the Department of Biodiversity, Conservation and Attractions.

The elephant in the room is emissions

“These places are important for West Australians, they’re part of our identity, a big part of our economy and we’re seeing the signals of distress from coral reefs and we absolutely have to take heed,” he said.

“It shows we’re clearly not moving away from fossil fuels fast enough. If you want evidence of that all you have to do is look under the water now at Exmouth Gulf.

“It’s crucial not only that we deal with climate change but also that we relieve pressure on places like Exmouth Gulf.”

The Intergovernmental Panel on Climate Change declared last year there should be no new coal, oil and gas projects if the world is to meet a net zero emissions target by 2050.

In WA the state government released acreage for petroleum exploration just last month both on land and in state waters.

Small companies are also exploring for onshore gas in the Kimberley while Woodside and Santos are both looking to start up major gas offshore gas projects in Australia.

Dr Gilmore said until carbon emissions were reduced reefs would continue to die. 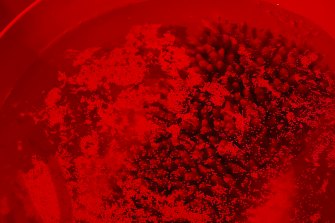