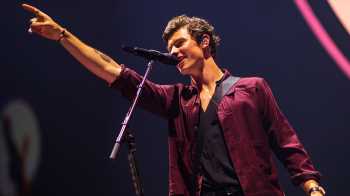 A 7.1 magnitude earthquake proved no match for pop heartthrob Shawn Mendes and thousands of his adoring fans on Friday, as the singer mounted the first of three performances at Downtown Los Angeles’ Staples Center.

Currently in the midst of an eponymous world tour that will clock 105 dates total, Mendes was moments from hitting the stage, following an opening set by Alessia Cara, when cries rang out across the arena. Rows of ceiling-mounted sound equipment swayed dangerously from cables and two of Mendes’ oversized set pieces rattled in place thanks to the quake, the second in as many days to hit Southern California.

Staples Center security cleared out several rows of floor seats as fans scrambled and took to social media to document the brief chaos — which at first seemed like concern for safety, but eventually proved to be scores of people desperate to get back in position for the singer.

After almost 30 minutes of equipment checks, the house lights dimmed and those swaying installations — one a giant LED sculpture of a rose, the other a massive disc-shaped projection screen — fired up to the good kind of calamity you should expect at a pop show: adolescent shrieking.

Mendes wasted no time jumping into his hits, opening with the funk-twinged romantic jam “Lost in Japan,” followed in quick succession by more of his signatures like the tortured Romeo track “Stitches” and the sexually adventurous “There’s Nothing Holding Me Back.”

But it wasn’t all about his ubiquitous radio successes. Mendes’ setlist combined many ballads and lesser-known titles from his debut 2015 album “Handwritten,” which he performed in a swift medley, seated at a black Steinway piano on a smaller stage at the south end of the arena.

Bearing in mind that, despite his still-expanding celebrity footprint, the part-time Calvin Klein model is native to the internet, having won his record deal nearly six years ago by singing covers on the now-shuttered video platform Vine, Mendes asked the crowd how many people knew him from day one. He then polled how many were only seeing him live for the first time that night. The response was giddy and equal on both fronts.

Like many of his contemporaries, Mendes finds himself in a balancing act: to satisfy a devout core audience while at the same time converting new admirers who may have discovered him more recently. To that end, his approach is simple: lean into the music. For instance, Mendes did not change clothes once during the nearly two-hour performance but swapped out guitars with nearly every song. He also took the seats of two different pianos when it was time to croon.

Mendes did throw a curveball or two, by calling back to his roots and sneaking in two covers. The first was at the top of his piano medley, a slower and more soulful take on the Whitney Houston classic “I Wanna Dance With Somebody.” The second was the set’s penultimate moment, his take on the Coldplay heartbreaker hit “Fix You.”

“This doesn’t happen every night, but right now my heart is beating so fast for you guys,” Mendes told the crowd, dialing up the mutual admiration on an evening that felt more urgent after a brush with natural disaster. His music, as always, served as a welcome shakeup.