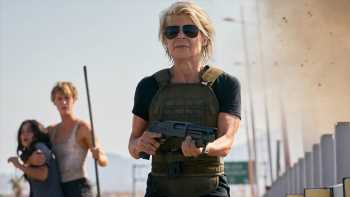 Arnold is back — and he and other cast members of “Terminator: Dark Fate” are joining a first-of-its-kind live-streaming Reddit AMA on Thursday from Comic-Con International in San Diego.

For the new installment in the “Terminator” franchise, Paramount Pictures is hosting a traditional Comic-Con panel Thursday 11 a.m.-12 noon in Hall H. Then, a few hours later (the exact time is still TBD) they’ll appear on Reddit’s Ask Me Anything live-streaming video broadcast.

The “Terminator: Dark Fate” crew — director Tim Miller and cast members Arnold Schwarzenegger, Linda Hamilton, Mackenzie Davis, Diego Bonetta, Gabriel Luna and Natalie Reyes — will participate in the AMA on Reddit, in a session hosted by Scott Rogowsky, formerly the face of game-show app HQ Trivia. The AMA also will include new footage from “Dark Fate,” which will go up on Reddit first before Paramount distributes the video through other social channels.

The Reddit AMA for “Terminator: Dark Fate” will go live on the reddit.com homepage Thursday in a takeover ad unit. Fans will be able to begin posting questions on the thread about two hours before the event; the body of the post will be an embedded video, which will be blank until the live-stream starts. Reddit and Paramount are calling the special AMA “Hall R” of Comic-Con, although it’s going to held off-site from the San Diego Convention Center (at an undisclosed location).

It’s Reddit’s first activation at Comic-Con and the first time the site has partnered with an entertainment franchise for a live-streamed AMA with a host. There won’t be an audience for the Reddit AMA at Comic-Con: Rather, the aim is to bring the excitement of the convention to Redditors worldwide.

“So much time and energy goes into creating these panels for Comic-Con, and we felt ‘Hall R’ with Reddit was the perfect digital extension for the Comic-Con experience,” said Tamar Teifeld, VP of digital marketing at Paramount.

Having the AMA live-streamed is important, “because you couldn’t do this with the whole cast in text format – it’s hard enough to follow AMA when it’s just one person,” Teifeld added. “We want fans to feel like they’ve gotten a personal glimpse into how this movie was made.”

Sure, Paramount could have live-streamed a session itself. But the studio wants to tap into the site’s passionate fanbase, as part of building hype and awareness for “Termination: Dark Fate” ahead of its Nov. 1 release date. According to Reddit, more than 200 million of users on the site are TV and film fans.

And Arnold has a big following on Reddit. On May 23, Schwarzenegger posted the “Terminator: Dark Fate” on Reddit from his own handle (GovSchwarzenegger) — and it essentially evolved into an impromptu AMA. So far, the post has generated more than 66,000 upvotes, more than 7,000 comments, and received 21 community awards.

As the AMA host, Rogowsky will select questions posted on Reddit to throw to the “Terminator: Dark Fate” crew, who also will be able to pick Qs they’d like to address. Of course, said Teifeld, “there’s always going to be haters – it’s the internet.”

Reddit is hoping to do more “Hall R” activations in the future, said Neal Hubman, Reddit’s senior director of West Coast brand partnerships. “We have started to invest more in our entertainment team to build true partnerships with studios like Paramount,” he said.

Paramount has previously worked with Reddit to promote releases including Darren Aronofsky’s “Mother!,” “Pet Sematary” and movies in the “Cloverfield” franchise.