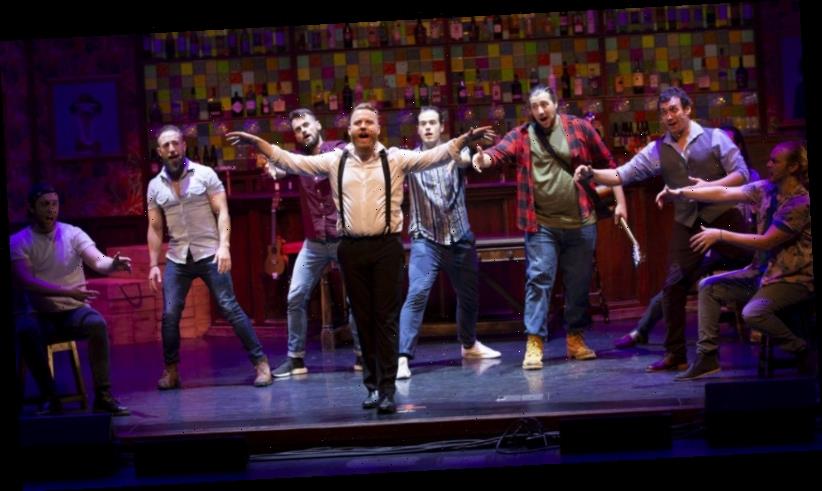 Free beer. This show has free beer, and on a sweltering summer’s night with bushfires raging across the state, a large section of the audience swarmed onstage – decorated as an English pub, complete with bar taps – to quench their thirst once the pre-show invitation went out.

Whether this was to prove necessary lubrication or convivial scene-setting (theatre-goers who saw the musical Once will remember a similar opening gambit) remained to be seen. I admit to low expectations: the idea of a laddish celebration of pub culture, with a song-list that wouldn’t be out of place at a boozy karaoke night, didn’t immediately appeal. 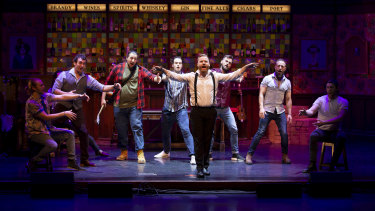 Choir of Man.Credit:David and Chris Cann

And when the all-male ensemble started with Welcome to the Jungle, it didn’t look promising. They had the energy and enthusiasm of Axl Rose in his prime, but if you’re going to cover the Gunners, you need a voice from hell.

Yet The Choir of Man will you win over, largely because their voices are from the other place. Even before a heavenly a cappella version of Sia’s Chandelier, or the choral charm of the folk song The Parting Glass, it’s clear these blokes can really sing.

And they’ve got a great sense of musical comedy. One highlight was an amusing – and surprisingly seductive – boy-band serenade of a female audience member using (of all things) Katy Perry’s Teenage Dream. 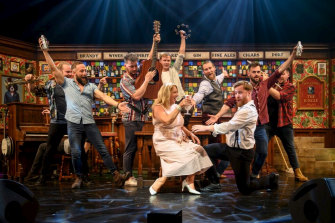 A serenade is never out of the question.Credit:David and Chris Cann 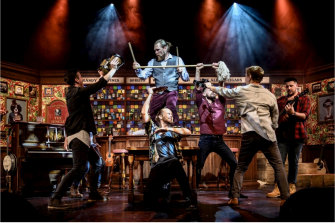 Then there’s the singing and dancing and mops as props. Credit:David and Chris Cann

Others included feisty jazz piano worked into the the Proclaimers’ I’m Gonna Be (500 Miles), a rendition of Red Hot Chili Peppers’ Under The Bridge that provoked both hilarity and sweet relief, and a wildly Dionysian version of The Pina Colada Song.

Between songs, a narrator (George Bray) delivers pocket sketches of each pub denizen (they all have names like “Pub Bore” and “The Beast”, and include a builder who reads Sylvia Plath at night) and he waxes lyrical – sometimes in maudlin, sentimental ways – about the “sacred place” the pub can represent.

As the evening progresses, the party tricks come out and an infectious sense of revelry takes hold. There’s excellent tap-dancing, a spot of totally unexpected acrobatics; the boys even folk dance in unison with pint glasses in each hand.

It’s just enough to forgive them the John Farnham classic they snuck in there, but then, these performers would sound good singing pretty much anything.

The Choir of Man pulls out all the stops to entertain, and the show has an effect that almost simulates alcohol. I left feeling pleasantly tipsy – without having touched a drop.