The stinging remarks are contained in the final report of Operation Watts, a joint Independent Broad-based Anti-corruption Commission and Victorian Ombudsman investigation that laid bare a “catalogue of unethical and inappropriate behaviour and concerning practices” inside the Victorian Labor Party. 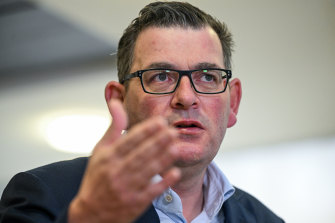 Premier Daniel Andrews conceded to investigators in his private examination that branch stacking in the Labor Party was a “serious problem” that heightened the risk of corruption. Credit:Joe Armao

IBAC and the Ombudsman have made adverse findings against former Andrews government ministers Adem Somyurek and Marlene Kairouz, but stopped short of referring the pair to the Director of Public Prosecutions for criminal charges. They said while the former ministers’ conduct had been “egregious”, the law around the employment of parliamentary staff was weak and it would be difficult to prove criminality.

“The evidence established that there was inadequate scrutiny of grants; that staff in the ALP head office turned a blind eye to evidence of branch stacking, payment of members’ fees and the harvesting of their votes; that staff and MPs were aware of practices such as the forgery of signatures and yet took little or no action to address the practice; that staff, with the knowledge of MPs, let other staff use their identity and password to log into ALP databases containing sensitive electorate office data on electors and misused that data; and that there appears to have been little if any effective auditing of such activities,” the report released on Wednesday says.

The findings will force the government to confront the rotten culture called out by IBAC and the Ombudsman by enacting the agencies’ 21 recommendations. They will put pressure on Premier Daniel Andrews to act, with the report saying Victoria had become a “laggard rather than a leader in parliamentary integrity”.

Andrews conceded to investigators in his private examination that branch stacking in the Labor Party was a “serious problem” that heightened the risk of corruption and must be eliminated, but denied the party did not take the misuse of public resources seriously.

He said he had been aware of the branch stacking inside the Labor Party – and across the factional divide – over the past few decades, but denied “any personal knowledge or involvement in such practices”.

However, the report casts a shadow over the Andrews government’s response to the so-called red shirts rort, in which Labor MPs misused taxpayer funds during the 2014 election campaign, and calls out Victorian politicians for refusing to act on the Ombudsman’s 2018 recommendation to ban MPs from directing staff to perform party-political activity.

Somyurek told IBAC that politicians were on a “unity ticket” after the red shirts investigation to only prohibit electorate staff from campaigning during elections. He said that all parties were in favour of such a narrow definition to protect their electorate officers from being investigated by IBAC or the Ombudsman.

“The Premier, Daniel Andrews, … strongly denied the existence of a ‘unity ticket’ to only include one element,” the report states. 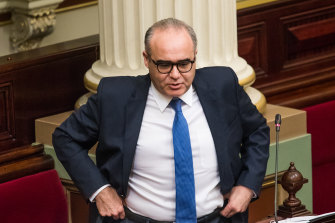 “He [Andrews] said that Mr Somyurek’s description of a ‘grand coalition’ was a ‘fantasy and a rather self-serving narrative that everyone’s doing it’, but he was not able to provide a reason why [the government did not ban MPs from directing their staff to work on party-political activities].”

The Premier admitted to IBAC he had a conversation in 2014 with Somyurek about Labor MPs using electorate officers for the election campaign, but denied his former minister’s assertions that he was warned by Somyurek. However, Andrews said at the time he did not believe there was anything improper about the scheme, which the Ombudsman later criticised.

“I probably did [understand the scheme],” Andrews told investigators. “I had no concerns at that time given, you know, I wasn’t acting to stop him doing it. But this issue of whether I spoke in those terms or essentially justified or was unconcerned with serious issues of probity and integrity that Mr Somyurek raised with me, that is not my recollection of that conversation and nor is that the evidence that he provided to the privileges committee at the time.”

The two-year investigation only received specific evidence about MPs and staff from the Moderate Labor faction, led by Somyurek, but the agencies concluded their findings suggested there was widespread misuse of taxpayer-funded staff for party and factional purposes across the party.

The evidence showed political patronage being exercised inside Moderate Labor, the report stated, with MPs handing out taxpayer-funded jobs based on factional loyalty and as a reward for recruiting non-genuine members.

IBAC and the Ombudsman found an environment in which MPs bullied staff and hired unqualified people to undertake factional work. There was “rampant nepotism, forging signatures, and attempts to interfere with government grants to favour factionally-aligned community organisations, which, in some cases, failed to use the funds as intended”, according to the report.

Somyurek was sacked from the Victorian parliamentary Labor Party in June 2020 after The Age and 60 Minutes exposed his branch stacking operation. Since then, he has attempted to resurrect his reputation and positioned himself as a critic of Andrews and the integrity agencies. The report lays bare his misconduct, including his bullying of staff. The former minister refused to respond to the draft report.

Many of the Moderate Labor MPs acknowledged their lengthy involvement in branch stacking, usually by paying for other people’s ALP memberships.

Staff were also placed under significant pressure to do factional work during office hours, even though “it was generally understood” that it was improper and unethical. “The pressure to do this work was in some cases implicit and in other cases overt,” according to the report. “There was compelling evidence of staff being bullied to perform this work by Mr Somyurek.”

Ombudsman Deborah Glass and IBAC Commissioner Robert Redlich have urged the government and opposition to make an election commitment to implement its 21 recommendations.

At the top of the agenda is establishing a Parliamentary Ethics Committee to monitor whether MPs are abiding by codes of conduct and an independent Parliamentary Integrity Commissioner by June 2024.

IBAC and the Ombudsman have also called on parliament to ban staff from undertaking party-political activity, including administering, organising or managing a political party, including recruiting and maintaining the membership of party members. MPs would be guilty of an offence if they directed or allowed staff to be engaged in party-specific jobs during taxpayer-funded working hours, another recommendation urged.

The integrity agencies acknowledged the work by the Victorian branch of the Labor Party to address the endemic practice of branch stacking since June 2020, but said it was too early to assess whether those changes would eliminate the practice and associated integrity risks.