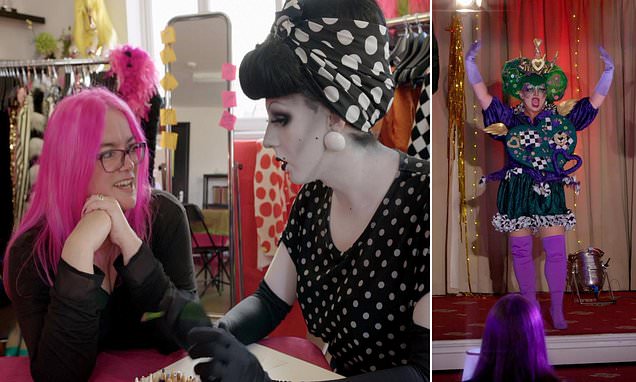 A cancer survivor who admitted she was terrified of leaving her two children without a mother has revealed how becoming a drag queen gave her a new found confidence.

Fleur, 48, from Scarborough, admitted she has ‘always loved drag’, but said she lost confidence after becoming a mother.

Taking part in Channel 4’s makeover show Drag S.O.S, she revealed motherhood and several battles with cancer had left her hating her body, which she deemed ‘disgusting’.

But following her drag queen makeover, she discovered a new-found confidence, and said she had been given a new perspective on how ‘fabulous’ life could be. Fleur applied for a makeover with the help of five drag queens from Manchester, after struggling with her confidence.

When two of the queens arrived at her house to learn a little more about her, the mother-of-two revealed: ‘I absolutely adore drag and it’s something I’ve always wanted to do.’

The pink-haired mother told Drag Queen gurus Anna Phylactic and Cheddar Gorgeous that she used to love dramatic, fashionable looks, revealing: ‘When I was really young like 15, 16, I shaved all my hair off and used to have zig zags up the side.’

But she added: ‘I think all that died down slightly when I had the kids. I’m not as confident as I used to be, shall I say.’ 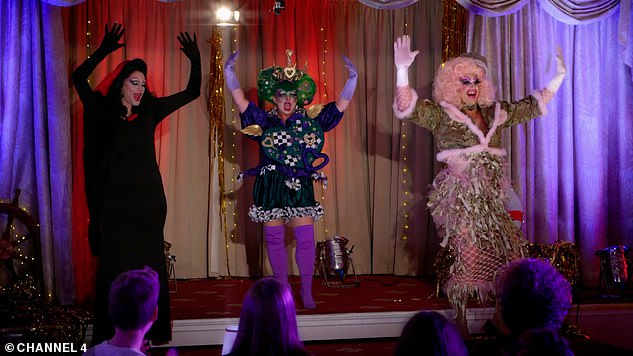 She was transformed by the Family Fabulous, a group of five drag queens, who help her prepare for a lip sync show along with two other contestants in front of her friends and family

She went on: ‘I used to go out quite a lot, dance quite a lot – but as it does when anyone becomes a mum, you don’t live that life anymore.’

Eldest daughter Ariel, 16, admitted she had picked up on her mother’s lack of confidence, saying: ‘She’s always trying to make us feel good about ourselves, which I love. But she does worry a lot.

‘If she finds a really nice outfit, she’s just less likely to wear it if she thinks it makes her look bigger.’

And sifting through her wardrobe, Anna couldn’t help but question why Fleur insisted on covering up so much. 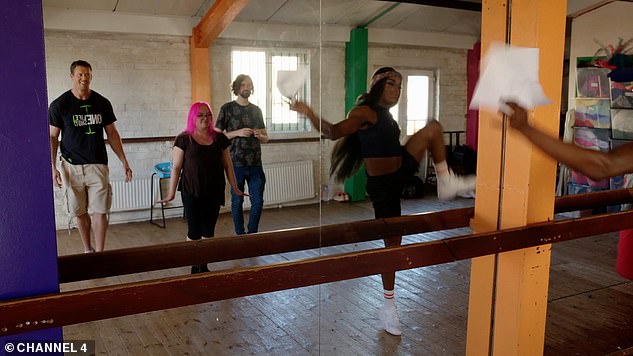 After taking part in dance rehearsals as well as confidence building workshops, Fleur admitted she was nervous about her performance

But Fleur was unable to ignore her insecurities, and referred to her stomach as ‘barrel’, saying: ‘I hate it. I just hate it.

‘Yeah I do look in the mirror every day and think I look disgusting. It’s just…I hate it.’

She continued: ‘I feel very passionate about women not having to feel like they don’t have to be beautiful. That’s what I want my children to feel about themselves.

‘And I don’t want anyone to ever feel really horrible about the way they look. But then I get so angry at myself because that is how I feel. And it’s horrid.’ 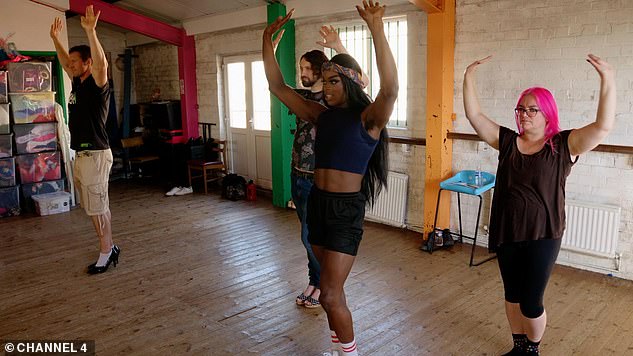 Meanwhile dedicated husband Denzil explained he fell in love with Fleur at first sight, revealing: ‘I first met Fleur as she stood up at the student union meeting and addressed us all and I thought wow.

‘She was drop dead gorgeous and seemed so confident, which made her immediately attractive.’

He continued: ‘She sees herself as not looking the way she should physically. But when I look at her, I still see the same girl I knew at college.’

Discussing her upcoming drag makeover, the nervous mother revealed to Liquorice Black that she had ‘quite a lot of scars’ that she was keen to cover up. 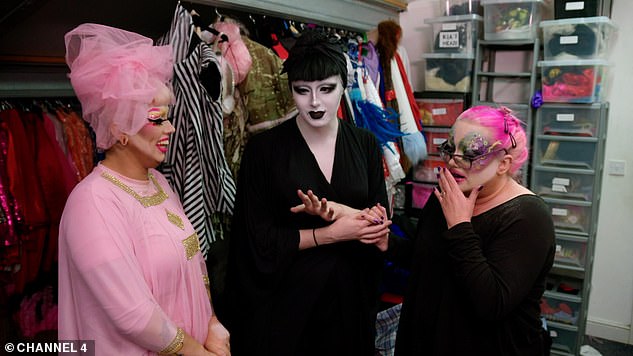 She explained: ‘I got cancer when I was 14 and they removed it. But then about 10 years ago now I was just sat at home and I thought “oh my god. I’ve got another lump”.

Having discovered the lump on her jaw, she admitted that being a mother had made her second cancer battle even tougher than her first.

She said: ‘I was a mum by that time, and it’s just really horrible thinking that you might not survive this, and you might not see them grow up, and they might not have a mum anymore.

And they’d come to kiss me and I’d flinch away. It was just really horrible.’ 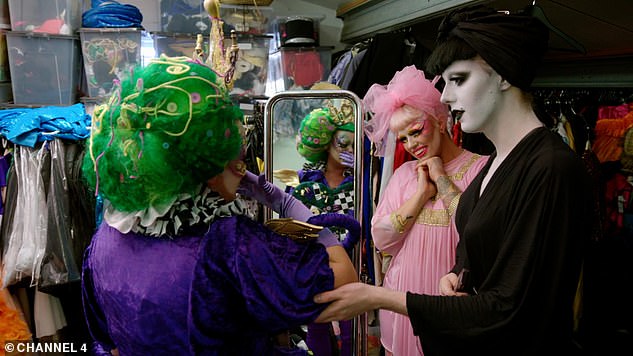 Clearly touched by the story, Liquorice suggested that now could be the perfect time for the mother-of-two to let her hair down.

She said: ‘The whole of your teenage and adult life you’ve battled this. Your scars should be celebrated – they’re your victories.’

With an upcoming show for friends and family at Scarborough ballroom, Fleur joined two other candidates seeking a drag queen makeover to learn choreography to perform a lip sync to Gloria Gaynor’s I Am What I Am.

But the mother admitted she felt nervous ahead of the performance, saying: ‘I’ve had so much fun. God knows what it’ll be like tomorrow. I’m probably just going to explode.’ 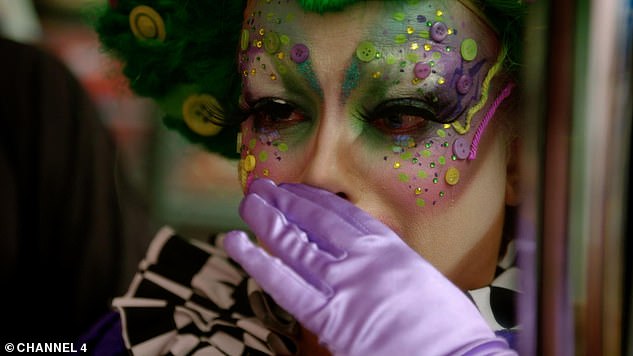 The mother of two was left stunned by her transformation, and could barely contain her emotion throughout the performance

After hours in hair and makeup, the drag queens were overjoyed to reveal the mother’s Alice in Wonderland inspired look.

And Fleur was astonished by her own transformation, and teared up as she revealed: ‘[My body] doesn’t matter. All those things I thought a few days ago, and having to look at that frumpy old lady – I feel so empowered.’

Alongside the rest of the drag queens, she set off to Scarborough ballroom for a show in front of friends and family.

‘I would like my daughters to see me on stage and happy, to show them that it doesn’t matter what happens in life, but you can do anything in life if you do want to do it,’ she said.

It wasn’t long before her family admitted they had noticed a difference in Fleur, with Ariel revealing: ‘I think the drag queens have rubbed off on her. She’s been a lot more bubbly and exuberant.’ 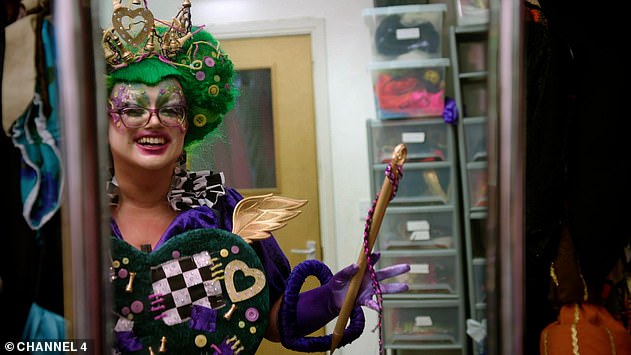 Ariel, 16, suggested her mother was ‘more bubbly and exuberant’ after the makeover, while Fleur said she had ‘forgotten all her body hang ups’ (pictured) 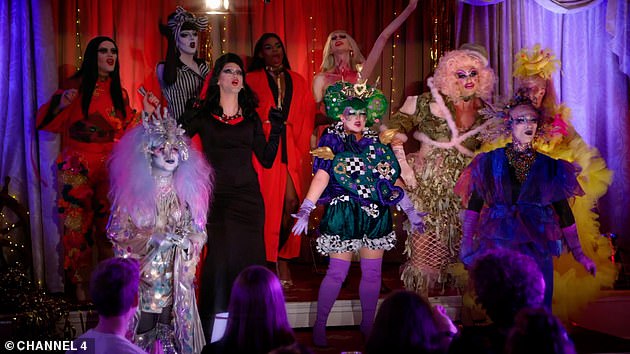 With her family cheering her on, Fleur made an appearance alongside seven other drag queens on stage in Scarborough – and said the experience had given her a new perspective on life

Meanwhile Denzel added his hopes for the performance, saying: ‘It would be nice to see her recapture some of that youthful excitement and youthful confidence that she had.’

As she strode into the room and joined the other drag queens on stage for the performance, the crowd hollers and cheers.

Fleur could hardly contain herself as she danced and sang along to the Gloria Gaynor track, before revealing: ‘Half an hour on that stage and I’ve completely forgotten all my body hang ups. I just need to remember how fabulous life can be.’