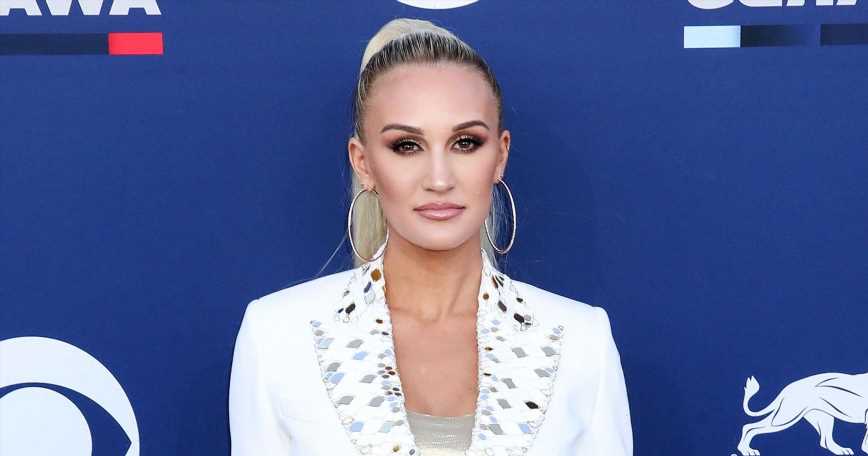 After Brittany Aldean (née Kerr) was criticized for her controversial views, the influencer is opening up about the backlash.

“I was extremely surprised. I, in saying my response, I never thought that there was anything wrong with it,” Aldean, 33, said during a Thursday, September 1, appearance on Fox News’ Tucker Carlson Tonight. “I think I’m advocating for children. I think that children should not be allowed to make these life-changing decisions at such a young age. They are not mature enough.”

The Youtube personality — who wed singer Jason Aldean in March 2015 — further added that she thinks it is “baffling” to allow a minor child to “choose their gender so young,” in comparison to age requirements for joining the military, purchasing cigarettes and driving a car.

“[There are] huge consequences [to gender-affirming surgery],” Brittany told Tucker Carlson. “And I think when you’re older, if you choose to make those decisions, by all means. But children are too young, not mature enough to make those decisions. And they’re life-changing, like you said. They may not be able to have children one day. There’s so many consequences to doing that at such a young age.”

She added: “And us as parents, us as a society, regardless of political status, should be able to sit back, speak our minds about it, and fight for these children.”

Brittany — who shares son Memphis, 4, and daughter Navy, 3, with Jason, 45 — made headlines earlier this month after she compared her childhood “tomboy phase” to that of someone transitioning.

“I’d really like to thank my parents for not changing my gender when I went through my tomboy phase. I love this girly life🤎✌🏼,” the blogger wrote via Instagram on August 23, alongside a beauty tutorial. The “Big Green Tractor” crooner replied: “Lmao!! I’m glad they didn’t too, cause you and I wouldn’t have worked out 😂.”

While Jason had his wife’s back, both Cassadee Pope and Maren Morris publicly slammed the remarks as transphobic.

“It’s so easy to, like, not be a scumbag human? Sell your clip-ins and zip it, Insurrection Barbie,” the “Middle” songstress, 32, tweeted on August 26, referring to Brittany’s blonde locks and the January 6 riot at the Capitol following the presidential election.

Morris doubled down on her stance via Instagram comment: “You know, I’m glad she didn’t become a boy either because we really don’t need another asshole dude in the world. Sucks when Karens try to hide their homophobia/transphobia behind their ‘protectiveness of the children.’ Weren’t they putting their kids in ‘[President Joe] Biden-is-a-pedo’ shirts on social media? Sounds like a real safe way to protect them from millions of eyes! … F—k all the way off to Insurrection Barbie and the fellow IB’s trolling this comment section with their hypocritical, hateful asses.”

Amid the women’s feud, Brittany addressed her opinions in another social media post.

“Advocating for the genital mutilation of children under the disguise of love and calling it ‘gender-affirming care’ is one of the worst evils,” she claimed in an Instagram Story at the time. “I will always support my children and do what I can to protect their innocence. The other day, Memphis wanted to be a dinosaur and tomorrow Navy will want to be a cat, they’re children.”

Brittany continued: “Some parents want to be accepted by society so badly that they’re willing to make life-altering decisions for their children who aren’t old enough to fully comprehend the consequences of those actions. Love is protecting your child until they are mature enough as an adult to make their own life decisions.”

Following the drama, the boutique owner has felt “so much support” from her followers and fellow parents.

“There’s definitely, you have the other the side of that too. And that’s fine. People are entitled to their opinions,” Brittany told Carlson, 53, acknowledging Morris and Pope’s beliefs. “But that’s just it. We, as conservatives, have a very hard time having an opinion, especially in society today, in the media, in relationships [and] in the workplace. And it’s very, very sad, but a lot of support within Nashville and just friends and family, for sure.”

Brittany added that she has not had a conversation with either Morris or the former Voice champ, 33, and it was all “simply based on opinion and political status.”

Carlson, for his part, was more antagonistic toward the two country singers. “I hope [Maren] leaves country music immediately for the viciousness of her attacking you,” he told Brittany on Thursday.

The “Bones” singer has her own crew of supporters amid the drama, including husband Ryan Hurd.

“Scoring quick points by picking on trans kids isn’t something that is brave at all,” the 35-year-old “Chasing After You” crooner — who married Morris in March 2018 — tweeted on Saturday, August 27. “And I’m proud of Maren for sticking up for them. Badge of honor to have CO engage in completely normal discourse, too. Shut up and sing only applies to those who you disagree with.”