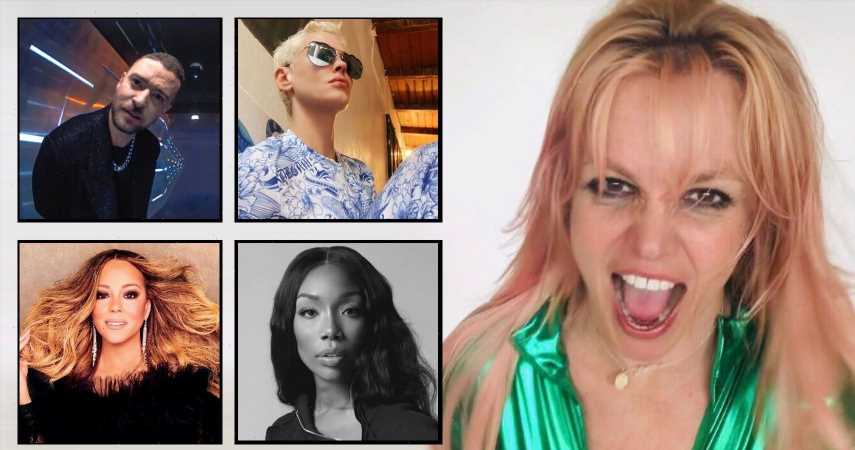 After a 13-year controversial conservatorship under father, Jamie, Britney Spears is finally speaking out and her plea to a judge to let her “have a life” is ringing throughout Hollywood.

At a Los Angeles court hearing, the 39 year old explained that, “This conservatorship is doing me way more harm than good.”

The #FreeBritney Movement has become a powerhouse social call for change as the pop icon’s supporters have been hoping for justice in this unusual sitatuation. However, her support doesn’t end with fans. Her fellow celebrities have come to her defense and the list reads like a who’s who of fame.

“After what we saw today, we should all be supporting Britney at this time,” Justin Timberlake, a name forever linked to Spears, Tweeted, “Regardless of our past, good and bad, and no matter how long ago it was… what’s happening to her is just not right. No woman should ever be restricted from making decisions about her own body.”

Rose McGowan, another advocate for standing against opression was vocal in her backing of the singer, Tweeting: “Britney Spears has every right to be angry. How would you feel if your life was stolen, dissected, mocked? I pray she gets to live your life on her terms. STOP CONTROLLING WOMEN. #FreeBritney.”

There was Halsey, who vocalized her admiration for Britney’s courage.

Not to mention a show of love from Mariah Carey.

Other popular names include Tnashe, Ziwe, Kathy Griffin, Brandy, and many more with additional names Tweeting out at an almost unbelievable pace. It shows that this long-standing issue that many felt had been swept under the rug might finally be coming to a head.

The order granting conservatorship to Jamie Spears was granted back in 2008 following a harrowing string of public issues for Britney, then documented by tabloids and paparazi. At the time, the star’s mental health was cited as the reason but a documentary which came out last year cast doubt on that claim, showing that her personal life was in a difficult state. For many, it seemed to be a case of temporary stress that, even if it was prolonged, should not have lasted 13 years.

In 2019, Jamie stepped down from his position, due to health reasons, and a temporary consevator took over. However, he still has control of her financial estate. While her father claims that the singer always had control over her own fate and the decision to end the oversight he had, new testimony from Britney is casting doubt upon that.

Regardless of past decisions, one thing appears certain. The momentum behind the current calls for Britney Spears to be “free” is undeniable. The future of this case could change the way people view conservatorship forever.