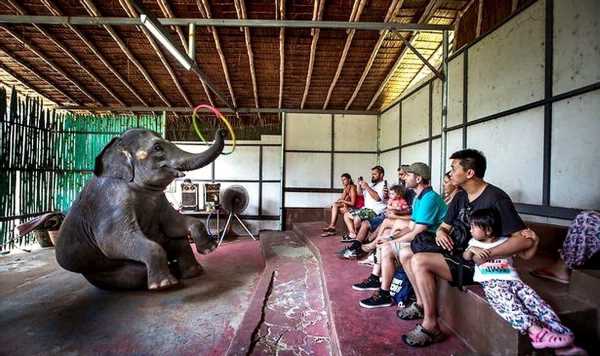 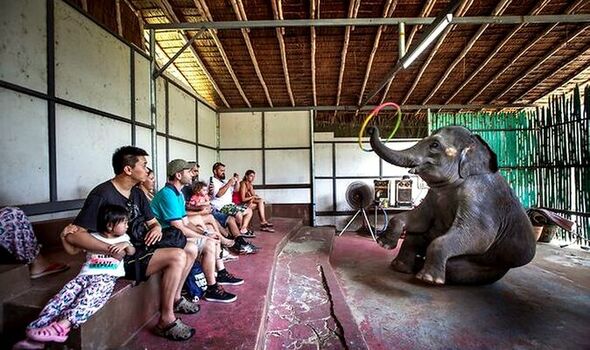 At least 1,200 UK firms are promoting 277 venues where the giants are allegedly “broken in by torture” to do tricks, play games and give people rides, Save The Asian Elephants has found.

Charity Chief Executive Duncan McNair, said: “To have seen baby elephants beaten, bloodied, injured, screaming and crying, bereft of anything known to them in the wild – all in the name of UK tourism profits, so much driven by the UK market – is an outrage and a tragedy.

“By buying millions of tickets to Asian elephant tourist ‘attractions’, we in the UK are ensuring the deep suffering and soon the end of this ancient and gentle species thousands of miles away.

Ruthless “We in the UK can and must act to end our ruthless domestic market by which thousands of firms profit from the tragedy of elephant torture in tourism.”

His charity calls for a “long overdue law” to end tourism advertising involving elephants and their babies being beaten, stabbed and forced to do tricks.

Briton Andrea Taylor, 20, was gored to death by an elephant on holiday in Pattaya, Thailand in 2000 – and 22 years on, her sister Helen Costigan is frustrated at the lack of government action.

The creature charged at tourists, including the student nurse from Billinge, near Wigan, while performing an obedience display.

Helen, 46, who was badly injured along with her father Geoff at Nong Nooch elephant park, said the ads for such businesses must be blocked in Britain.

She said: “Andrea’s death left a huge hole in our hearts and my father was never the same again.

“I am working with Save The Asian Elephants to stop places such as Nong Nooch being advertised in the UK.

“Not only are elephants tortured, abused and mistreated but places such as this are also a real danger for tourists.”

The Animals Abroad Bill was intended to ensure that cruel animal practices overseas were not supported by the UK consumer market – but the Bill was dropped from this year’s Queen’s speech.

There are estimated to be fewer than 45,000Asian elephants alive today, with 40 per cent of them kept in cruel captivity for exploitation.