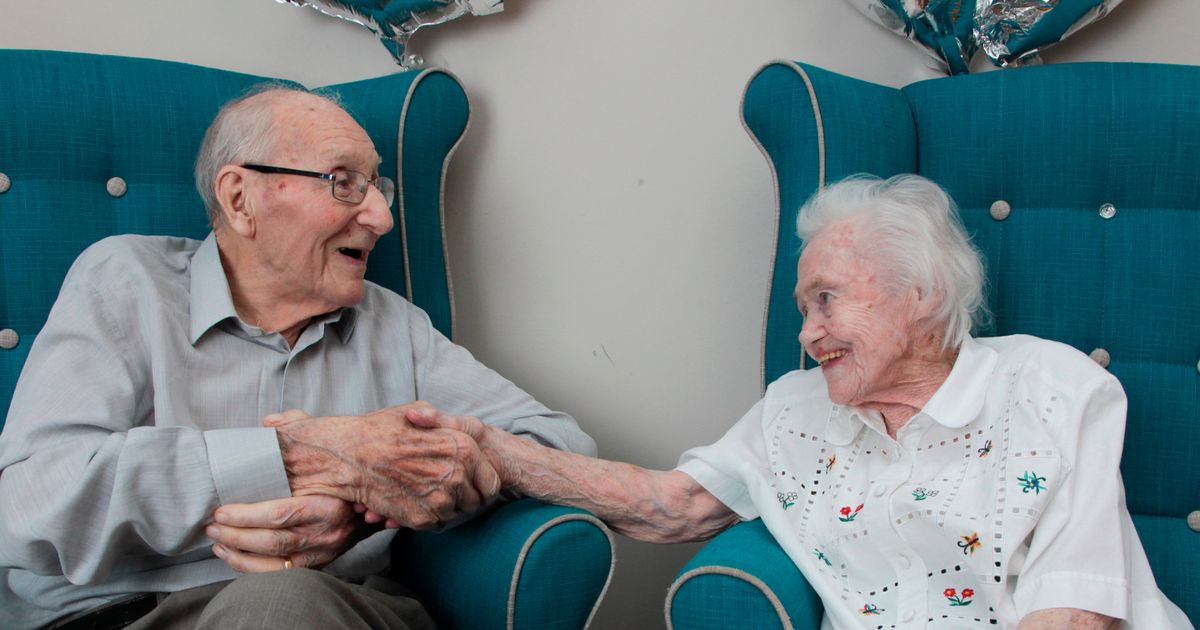 A couple who have been married for eight decades haven't spent a night apart since World War Two – moving into the same care home together.

The pair, who married on August 3, 1939, recently moved into a care home in Codsall, Staffordshire – but refused to leave each other and made sure they moved into a shared apartment after both suffering a fall at home weeks before.

And although never spending time apart in 80 years might sound difficult for some couples, Joan, 100, and Jack, 102, say it's the reason their marriage has lasted such a long time.

Their only daughter, Gill Skelton, 75, said: "Mum and dad never spent a single night apart after the war.

"They got married just a month before war broke out and dad was initially posted to Portsmouth.

"Mum was so worried about him that I don't think they ever wanted to be apart after that.

"Even earlier this year when they both had a fall, they only agreed that they would go into a home where they could be together, they won't be parted."

Joan and Jack, who were originally from Kendal, Cumbria, got married on the 3rd of August 1939 after meeting a few years earlier in a cycling club.

Jack served in the Royal Electrical and Mechanical Engineers and served in the south of England as well as Italy during the allied invasion.

Daughter Gill who has herself been married to her husband Tony, 76, for 52 years, said: “They met at a cycling club, while mum was going out with someone else but she met dad and that was it.

“They both did cycling for years and swimming as well.

“Mum was very worried when he got sent to Portsmouth because because there were a lot of bombs dropping.

"I think she just wanted him to be back at home with her, so when he came home, they didn't let each other go.

“They both had a fall earlier this year so social services decided they couldn’t live alone any longer.

"They insisted they would stay together."

The pair used to travel a lot around Europe and Joan during their trips Joan was teaching English nuns in Italy.

The pair have two granddaughters, Jane and Caroline and four great-grandchildren Toby, 17, Charlotte,14, Isabel, 12 and Reuben,8.

Jack, who worked as an engineer, designed and made the radar for Donald Cambell’s ‘Bluebird’, the same he used in his attempt to break his water speed record.

At some point Joan used to work for her father who was a butcher but then she became a spirella corsetiere, visiting people at their home, measuring them for corsets.

When it comes to the secret of their marriage, they say that they did argue but always tried to work through their differences.

Joan said: "I don't feel like it's been a long time.

"Sometimes I wonder where the time has gone but then I look at my great-grandchildren and I realise.

"My advice is to talk about things and don't go to sleep angry.

"I don't believe couple who say they've never had a cross word, but we always talk about our problems and solve them before the end of the day."

Jack said: "It was a wonderful experience, a lovely happy marriage.

"We are very lucky to have found each other."

Gill added:"I think they are genuinely are still in love and they still take care of each other.

“They always say, a marriage has to be ‘give and take’ and ‘ never go to bed on a quarrel’ , which is probably good advice.

“They did used to have the old fight or scrap but my father would be very difficult to argue with because he just says ‘I don’t want to’ and that’s it.

“These people that say they never had a fight, they must have the most incredibly boring marriages."