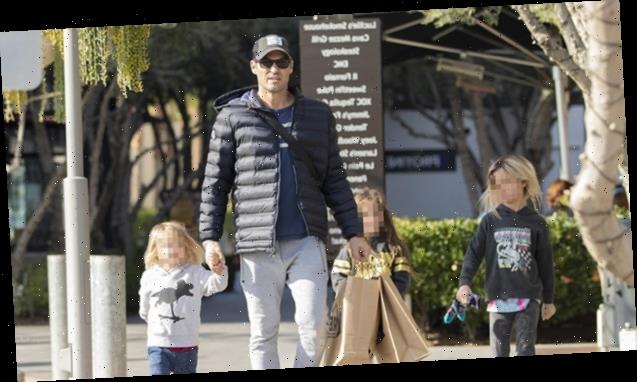 Brian Austin Green is enjoying quality time with his kids while ex, Megan Fox vacations with her new boyfriend, Machine Gun Kelly. The exes share 3 sons under the age of 10.

Brian Austin Green is loving one-on-one time with all three of his sons — Noah Shannon, 7, Bodhi Ransom, 6, and Journey River, 3 — while their mom, Megan Fox is away in Puerto Rico with her boyfriend rocker Machine Gun Kelly. “Brian has the kids full time while Megan is away which he is thrilled about. And, they love being with their dad, so it’s very easy and stress free for everyone,” a source close to the actor tells HollywoodLife, exclusively. Brian recently celebrated his 47th birthday with his sons, as seen in a sweet photo the actor shared to Instagram on July 15.

“Megan can focus on work and know that Brian and the kids are great and happy,” the insider says, noting that the exes have handled their split amicably. “Of course it could be an entirely different situation considering the circumstances, but fortunately Brian has been so mature about all of this and hasn’t made any drama about Megan being in Puerto Rico with MGK, while he stays home with the kids,” the source explains, adding that Brian’s “been nothing but supportive and loving through all of this.”

Megan, 34, is currently in Puerto Rico working on a film project, Midnight in the Switchgrass, which also stars her real-life love interest, MGK, 30. Notably, the two first met on the set of the upcoming crime thriller. “She’s total professional and wouldn’t be in Puerto Rico if it wasn’t for working on her new film,” a separate source close to the actress tells HollywoodLife, exclusively. “But of course, having Colson [MGK’s real name] there is an added bonus and makes filming all that much more fun. It’s clear to see how happy and comfortable Megan is with him, and they’re having a blast with Randall [Emmett] and Lala [Kent],” the source reveals of the Vanderpump Rules couple, who is also present on the trip. Randall works in the film industry. “They definitely have a connection and they’re really cute together,” the insider adds of Megan and MGK.

Brian confirmed his split from Megan in May. The exes began dating in 2004, and wed in 2010. Megan moved on with MGK after she appeared as his love interest in the new music video for his song “Bloody Valentine.” The new couple was spotted kissing and holding hands outside a Los Angeles bar on June 15, and they’ve been inseparable ever since.

Meanwhile, Brian has moved on with 38-year-old Australian model, Tina Louise. The actor was first spotted out with the blonde beauty on a lunch date in LA on June 30. And, PDA photos followed, as the new couple was photographed holding hands.