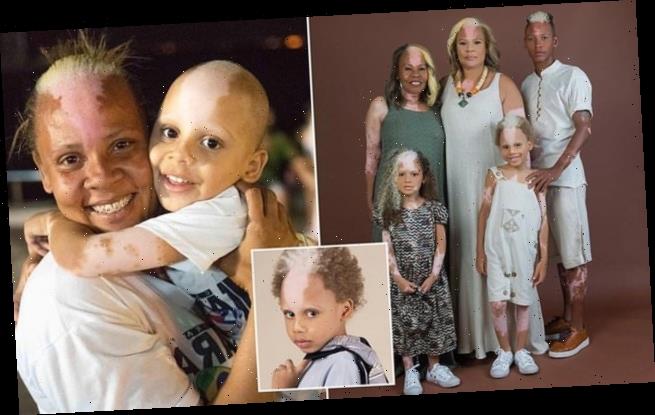 A boy whose skin condition often leave strangers assuming he is a burns survivor has bagged an international modelling job.

Samuel Silva, 7, from Bahia, Brazil, was born with piebaldism, a rare genetic condition that causes patches of white skin and hair because of a lack of melanin.

The condition is shared among his family, with his nail technician mother Nivianei de Jesus Purifiçao, 41, and his grandmother Dona Dionisia, 65, having similar markings.

Some of the most distinctive markings are across his forehead and hairline and Samuel also has uncles and cousins with the skin condition.

His parents initially shaved his head to hide his ‘white crest’, but then decided he should embrace the condition, and set up an Instagram account, which has landed him a modelling contract. 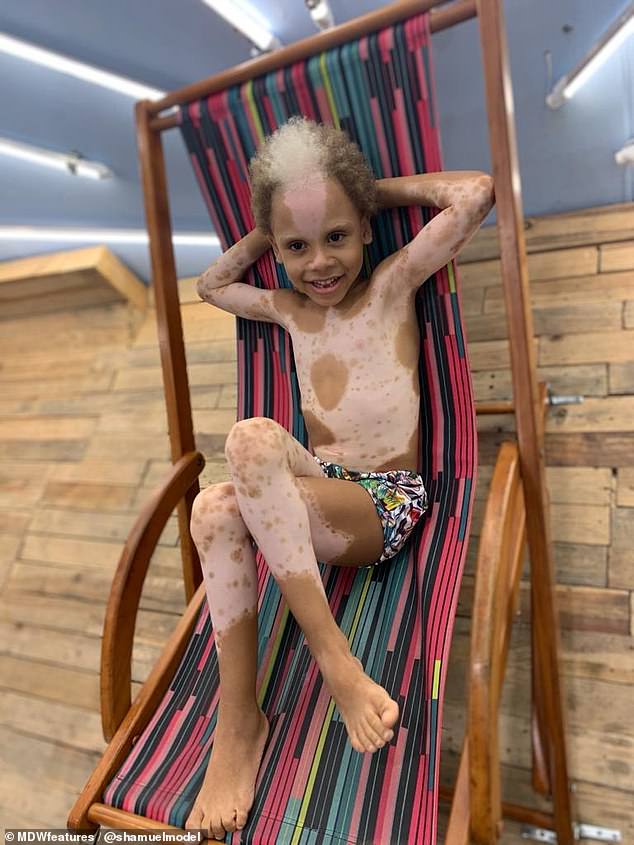 Samuel Silva, 7, (pictured) from Bahia, Brazil, was born with the skin condition piebaldism which left him with unpigmented patches of skin and hair 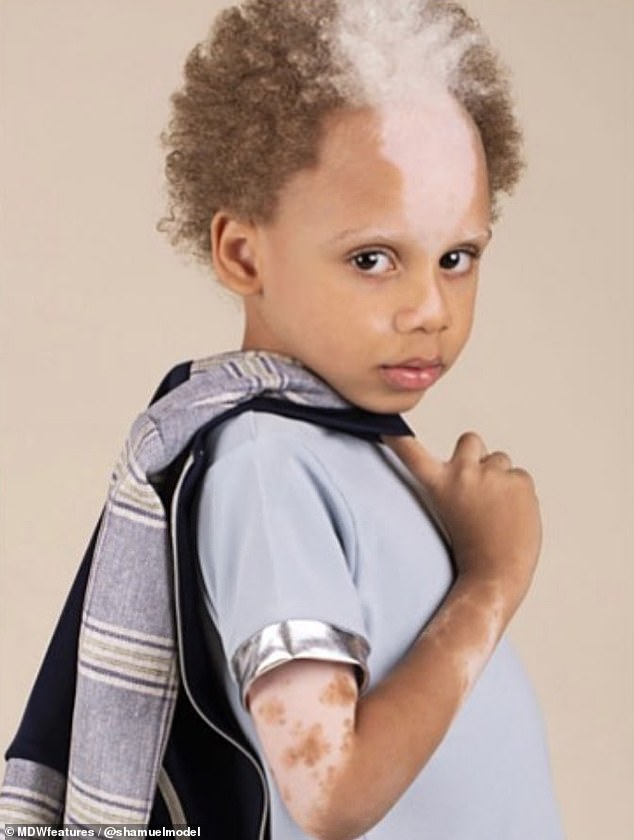 His unique appearance led to the international children’s modelling agency Sugar Kids signing him up and he has since appeared in Junior Style London, Bazaar Kids, Dixie Magazine as well as appearing in Toronto Fashion Week, Paris Fashion Week and London Kids Fashion Week

Samuel’s family faced discrimination because of the condition, with his grandmother Dona forced to cover herself with long-sleeved tops and trousers, while his mother Nivianei was nicknamed ‘Free Willy’ after the film.

Samuel’s uncle Julio Sanchez-Velo, 53, said: ‘The doctor didn’t think much of it because he was healthy. The family had never been properly diagnosed and just referred to the markings as a birthmark. But they knew it wasn’t vitiligo because the stains never changed in shape or size.

‘Nivianei knew she was different and embraced it with open arms. She wore short skirts and tops whenever she wanted, and always stood her ground against anyone who dared to bully her.

‘She gained everyone’s respect in the community and would then only receive stares and comments when she left her neighbourhood. 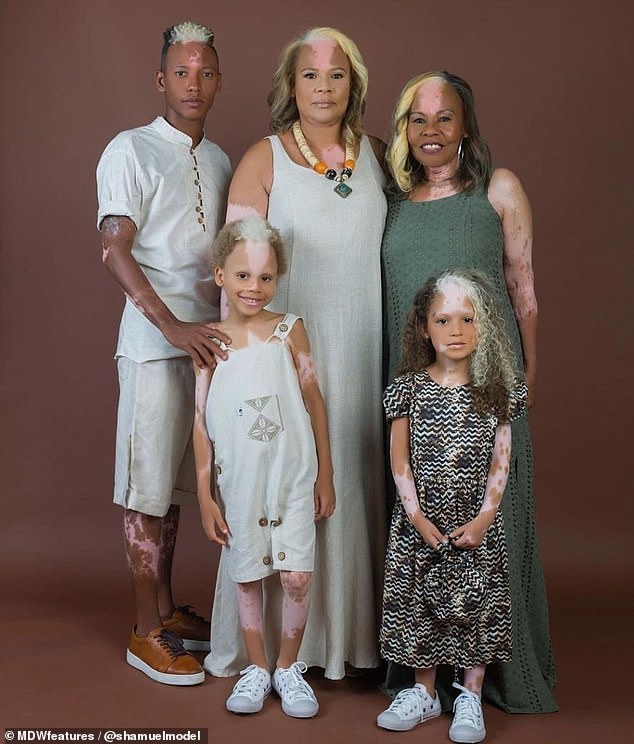 Samuel pictured with his mother, grandmother and two cousins who all have piebaldism. The family initially tried shaving his head to prevent people making fun of his white hair 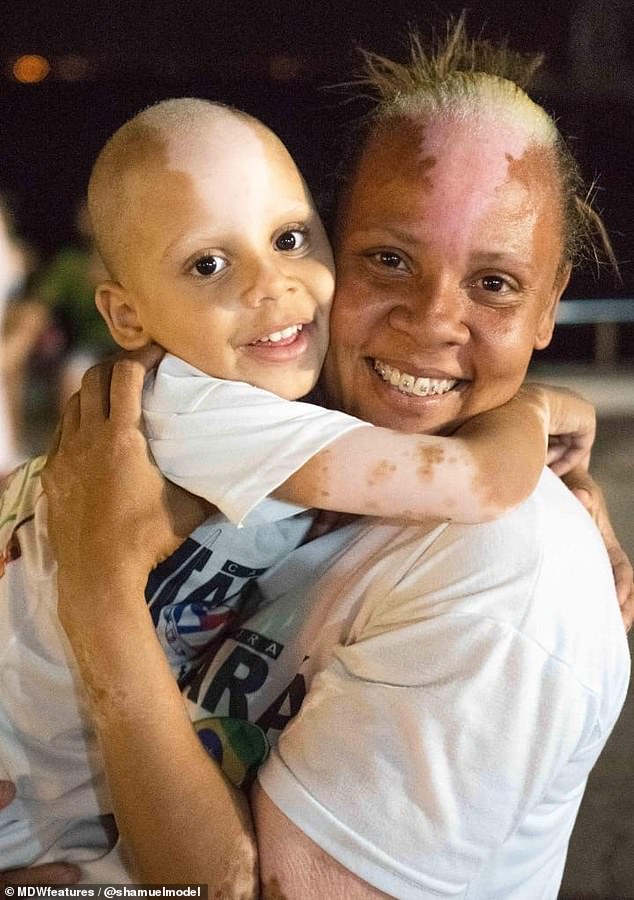 Samuel’s mother Nivianei (pictured) was initially nicknamed ‘Free Willy’ because of her patches of lighter skin, but she eventually embraced the name

Piebaldism is a skin condition caused by a lack of melanocyte cells in certain areas of the skin and hair.

These cells produce melanin pigments which contribute to hair, eye and skin colour, meaning the absence of the cells leaves these areas lighter than normal.

Around 90 per cent of those with the condition have a white section of hair near the front of their hairline.

The unpigmented patches of skin are often symmetrical on both sides of the body and there maybe spots or patches of pigmented skin within the affected areas.

The unpigmented areas are usually present at birth and do not increase in size or number as a person ages.

The affected areas are at an increased risk of sunburn and skin cancer but aside from this, the condition has no effect on the general health of the affected individual.

‘She was given the nickname Free Willy from the movie about the killer whale who had white markings, but she embraced the name and said it with pride.’

Nivianei hoped that Samuel would be born without her skin condition, like her first child Andreia.

However, Samuel was born with piebaldism which led to strangers assuming that he had been involved in an accident at some point in his life, leaving him with burn scars.

‘Nivianei knew she would have to do whatever she could to help Samuel grow up being proud of his skin.

‘The family brought him up to accept himself and his differences,’ Julio said.

‘Samuel attracts a lot of attention in public, like when he is shirtless on the beach and you can see the white markings all over his body.

‘Strangers will come up and ask all sorts of ignorant questions, like if Samuel has been burnt in an accident.

Last year, Samuel’s family also embraced his own skin condition and began sharing pictures of him on Instagram 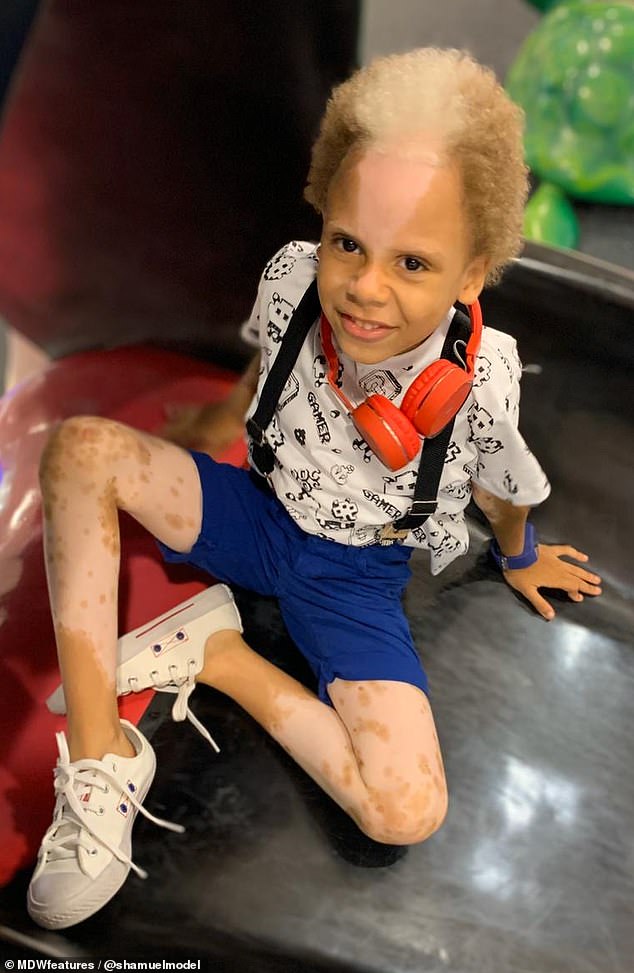 Samuel’s grandmother Dona Dionisia, 65, was discriminated against because of her own piebaldism, forcing her to cover herself up with long-sleeve tops and trousers

‘Everyone is used to it and just explains what piebaldism is.

‘Samuel’s hair in particular is stunning. His parents used to shave it so as not to draw more attention to his condition, but once they let it grow into an afro it looked amazing.

His parents initially shaved his head to hide his ‘white crest’ but eventually allowed him to embrace it in February last year when they started an Instagram account to share images of Samuel and his marks.

Samuel’s uncle Julio Sanchez-Velo, 53, said that his nephew enjoys now being the centre of attention and often shows off his ‘beautiful stains’ 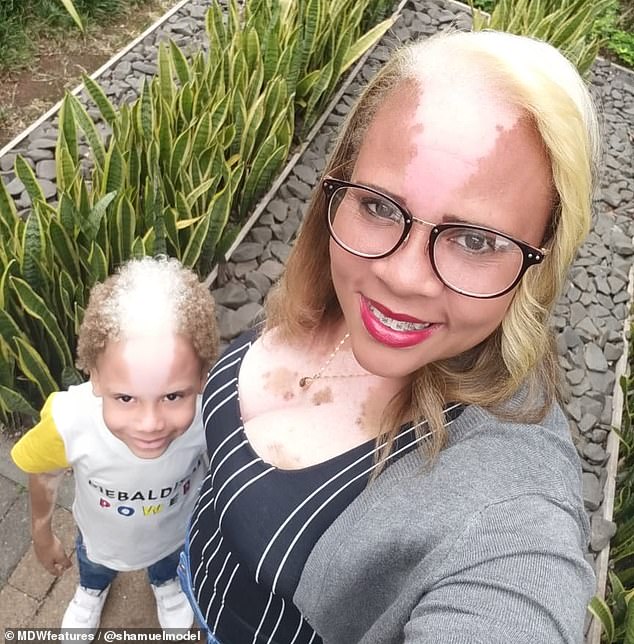 Despite feeling different to other children, Samuel is proud to be himself and is unashamed of his skin condition

The success of the social media account led to children’s modelling agency Sugar Kids approaching them in April 2019 and Samuel became an overnight sensation.

Despite feeling different to other children, Samuel said he is proud to be himself and tells everyone about his ‘beautiful stains’.

Julio said: ‘He really loves modelling. He is very artistic and loves to walk on the runway and pose for photographs. He really thrives and you can see it in his face.

‘He loves being the centre of attention and travelling. He comes from a poor community in Brazil where there are not many opportunities to see the world.

‘He has become the face of acceptance and inclusion in the children’s fashion industry, and we hope that other kids who feel different about themselves will see how well Samuel is doing and feel good about their own differences.

‘Being different is not something we should hide – we have to embrace it, just like Samuel.’

His family hope that other children with visible differences will be inspired by Samuel to accept themselves.

Piebaldism poses no threats to a person’s health and is often confused with vitiligo where the skin loses its pigment resulting in discoloured patches appearing over time.