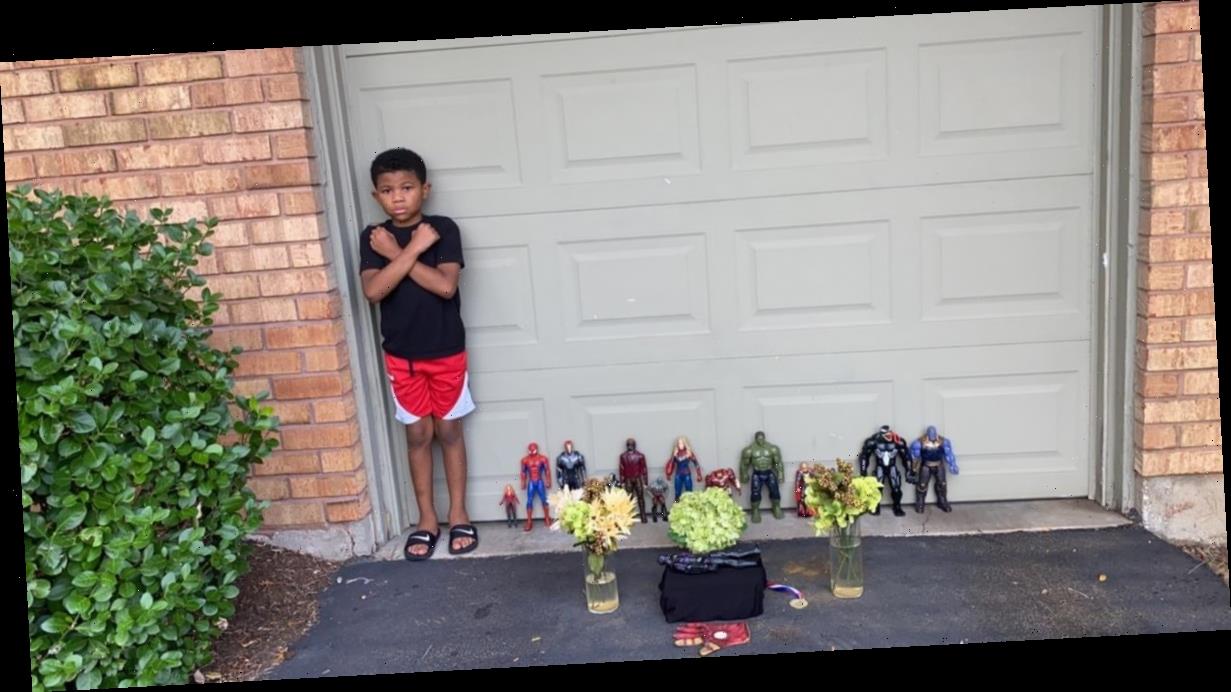 Chadwick Boseman helped show people that “Black kids can be heroes, too,” 7-year-old Kian Westbrook said. The boy from St. Louis spoke to CBS News on Monday, after a photo of his memorial for Boseman went viral.

The image showed Kian’s tribute to the “Black Panther” star, who died Friday at the age of 43 after a four-year battle with cancer. Kian wanted to honor the actor, so he gathered his “Avengers” action figures and lined them up in his driveway.

Kian’s dad, King Westbrook, said his son liked “Black Panther” because he loves comics and superheroes. “But for him to see one that looked like him or looked like his father, as far as a Black man that’s saving the world, that meant a lot to him,” Westbrook told CBS News.

“Kian knows about President Obama and the importance of an African American who led the country,” Westbrook said. “But for Kian to also see a hero that’s a positive figure that led a country, as well — Kian enjoyed seeing that too.”

MY BABY BOY AND THE AVENGERS HOLDING A MEMORIAL FOR BLACK PANTHER❤💪🏾#Wakanda4Ever pic.twitter.com/nYAnER23Ig

Westbrook said his son found out about Boseman’s death because his older brother has a phone and saw news reports about it. “He had a typical 7-year-old response and he cried a lot, and he couldn’t stop talking about him,” Westbrook said.

“His mom asked him if he would like to do something special for Chadwick Boseman to show how much he loved him.”

Kian said he wanted to do something similar to the memorial held for Iron Man in “Avengers: Endgame.” So he gathered his action figures so they could “send off their fallen comrade,” Westbrook said.

Kian posed for the photo making the “Wakanda forever” gesture from “Black Panther,” and his dad tweeted the image on Saturday.

By Monday, it had been retweeted over 70,000 times and gained widespread attention. Hugh Jackman replied to the tweet, telling Kian there had been many tributes for Boseman, but “none as special as yours!”

“It’s the perfect way to send off a superhero,” Jackman wrote. “He was a leader on the big screen and in real life. I’m sure you’re going to be make him and your Dad very proud in your lifetime to come. HJ #Wakanda4Ever.”

Westbrook wrote a reply thanking Jackman for his kind words. He also expressed his thanks to the thousands of others on Twitter for the “loving and kind words given to him for this post.”

While Boseman’s death has been hard for Kian, he feels good that he got to honor him, Westbrook told CBS News.

“Kian understands that [death is] part of being a human, he understands as best he can for a 7-year-old. So, when Chadwick Boseman passed he had trouble understanding how someone so young and so lovable could pass,” Westbrook said. “But Kian believes in God and he understands he’s with God now.”

After Kian’s photo went viral, his dad showed him social media posts of other memorials honoring the actor. “He had a chance to see what other kids were doing to honor Chadwick Boseman and that made him pretty happy,” Westbrook said.

“Me and his mom are so very proud of Kian for doing this,” Westbrook said. “We knew people would want to honor him because he’s such a great person — not just a great actor, but a great person — and so being the fact that Kian wanted to honor someone that he looked up to, we’re happy he chose to express himself in this way.”