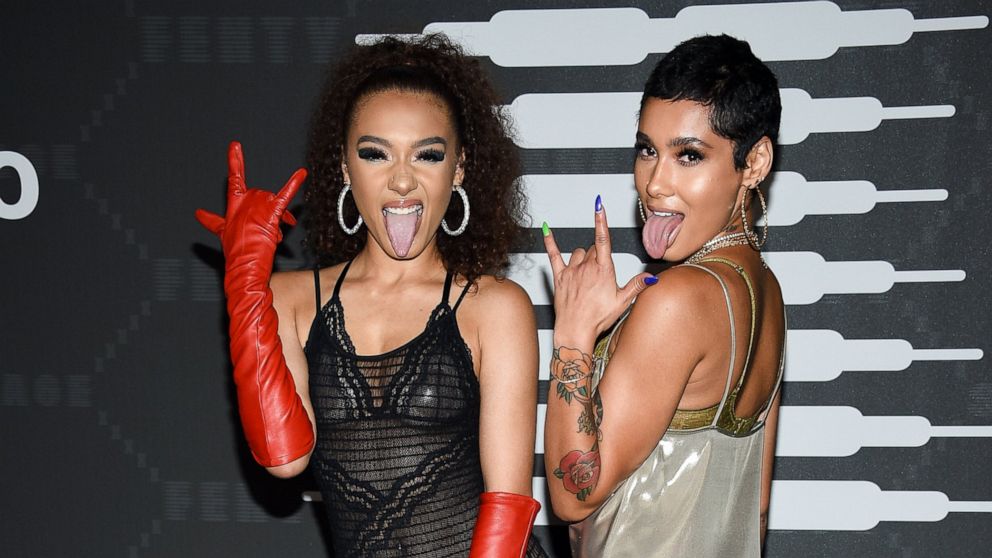 Big Sean, A$ap Ferg, Halsey and Migos rocked Rihanna’s Savage X Fenty crowd Tuesday from a color-saturated stage at the Barclays Center as Normani and Laverne Cox joined an army of supermodels and dancers in a showcase of her latest loungewear and lingerie.

But don’t look for her juicy new collection on social media, in a big way at least. The curated audience heavy on young influencers had their phones locked in cases for the New York Fashion Week show that was filmed for streaming Sept. 20 exclusively on Amazon Prime in more than 200 countries and territories.

Rihanna did right by her fans by putting her latest teddies and other lacy pieces immediately on sale at Amazon, and by setting up photo booths for her audience’s pleasure outside the Brooklyn stadium after the 40-minute show.

On stage, her white multilevel backdrop evoked a small city bathed in purple, yellow and red light. Her legion strutted and danced on platforms and in large windows as she dressed some of the biggest names in modeling, sisters Bella and Gigi Hadid included, harem style in looks of pink and yellow. She also enlisted 21 Savage as a model and Fat Joe and Tierra Whack to perform.

At one point during the show, a small simulated water pool center stage rippled as Migos moved. At another, the crowd threw up their arms as DJ Khaled instructed.

Plus-size model Paloma Elsesser joined the Hadids, Joan Small, Alek Wek and Cara Delevingne for Rihanna’s second fashion week foray of the fledgling brand, this collection for fall-winter. Like her models and dancers, her line ranges in sizes 32A-42H in bras and XS-3X for the rest of the body.

Among Rihanna’s guests were Kacey Musgraves, Kehlani, the pregnant Ashley Graham and Diplo. They joined others for photos ahead of the performance.