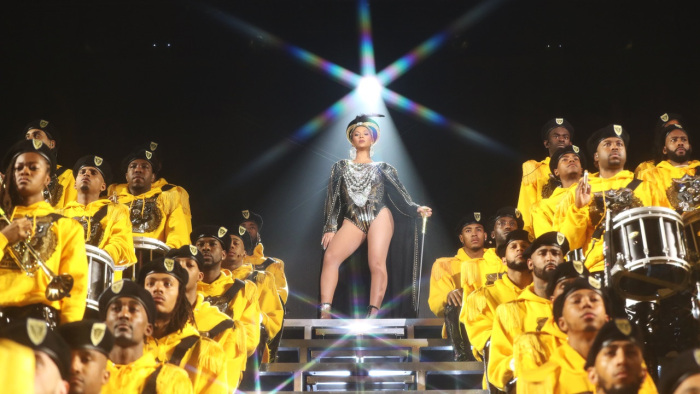 Beyoncé and Sara Bareilles could add Emmy trophies to their awards shelves this year, having been nominated in key music categories Tuesday by the Television Academy.

Beyoncé’s “Homecoming” special on Netflix was nominated in six categories, and four of those include a nod for the pop superstar herself. Only one of those is in a music category; she’s nominated for music direction of a variety special alongside co-music director Derek Dixie (a first-time nominee). Her other nods are as a producer, co-director and writer of the special.

Bareilles, nominated last year for her performance as Mary Magdalene in “Jesus Christ Superstar,” was cited this year as co-songwriter of a new song on CBS’s Tony Awards, “This One’s for You.” Her co-host on that show, Josh Groban, shares the nomination and is up for his first Emmy.

They were the most high-profile performers cited by Emmy voters in the seven music categories. As always, the results were a wide-ranging collection of newcomers and previous Emmy winners.

Emmy’s newest category, for music composition in a documentary, saw six entries, nearly all of them earning their first Emmy nominations: Hannah Peel for HBO’s “Game of Thrones: The Last Watch”; Benjamin Wallfisch, for NatGeo’s “Hostile Planet”; Miriam Cutler, nominated for both CNN’s “Love, Gilda” and “RBG”; and Steven Price, who earned two nods for Netflix’s “Our Planet” (both score and main title theme).

Only Marco Beltrami, nominated for the NatGeo doc “Free Solo,” has been in the Emmy competition before. His co-composer on the rock-climbing film, Brandon Roberts, also earned his first Emmy nomination.

Three of the five nominees in the category of music composition for a series are first-timers: David Wingo for HBO’s “Barry,” Adam Taylor for Hulu’s “The Handmaid’s Tale” and Siddhartha Khosla for NBC’s “This Is Us.” But the competition in this category is fierce, as they are up against five-time Emmy winner Jeff Beal for the final episode of Netflix’s “House of Cards,” and last year’s winner, “Game of Thrones” composer Ramin Djawadi, for “The Long Night” episode of the final season of HBO’s behemoth.

Half of the nominees in the category of music composition for a limited series, movie or special have been to the Emmy rodeo before. Previous winner Edward Shearmur (“Masters of Horror”) is up for Showtime’s “Escape at Dannemora” while another past winner, David Arnold (“Sherlock”) earned two nominations, for the score and main title theme for Amazon Prime’s “Good Omens.”

Earning their first nominations in that category were Hildur Guonadottir for HBO’s “Chernobyl,” Kris Bowers for Netflix’s “When They See Us,” and Keefus Ciancia for HBO’s “True Detective.” Music producer T Bone Burnett earned his third Emmy nomination as co-writer with Ciancia on “True Detective.”

Similarly, about half the nominees in the music direction category are Emmy veterans. Rickey Minor earned his eighth and ninth nominations for overseeing the music for CBS’s “Aretha! A Grammy Celebration for the Queen of Soul” and ABC’s “The Oscars”; he won in this category in 2017. Greg Phillinganes, who won in 2015, is back at the Emmys for BET’s “Q85: A Musical Celebration for Quincy Jones.”

Fox’s “Crazy Ex-Girlfriend” collaborators were cited in both the songwriting and main-title theme categories, hoping for a win from the show’s final season. They’ve all contended for the celebrated musical-comedy show before — Rachel Bloom earned her fifth and sixth nominations, Jack Dolgen his third and fourth, while their co-writer Adam Schlesinger earned his seventh and eighth — he’s the only past winner of the trio, having won twice for original songs at the Tony Awards.

Their fellow nominees in the original-song category include “Late Night” host Seth Meyers (on his 21st nomination, having won once for a “Saturday Night Live” song), first-timer Eli Bolin and two-time Emmy winner John Mulaney, for a song in the “Original Cast Album: Co-op” episode of IFC’s “Documentary Now!”

Main-title theme music nominees, in addition to the aforementioned “Crazy Ex-Girlfriend” trio and the composers of “Good Omens” and “Our Planet,” are past winner Thomas Newman (“Six Feet Under”) for Hulu’s “Castle Rock” and first-time nominee Nicholas Britell for HBO’s “Succession.”

In only its second year of existence, the music supervision category — honoring the creative use of previously existing songs — includes last year’s winners, Robin Urdang, Amy Sherman-Palladino and Daniel Palladino for Amazon Prime’s “The Marvelous Mrs. Maisel; and another nominee from last year, Thomas Golubic for AMC’s “Better Call Saul.”

Music awards will be handed out at the Creative Arts Emmy awards, televised on Sept. 14 and 15 on FXX, with the main Emmy show to air on Fox on Sept. 22.