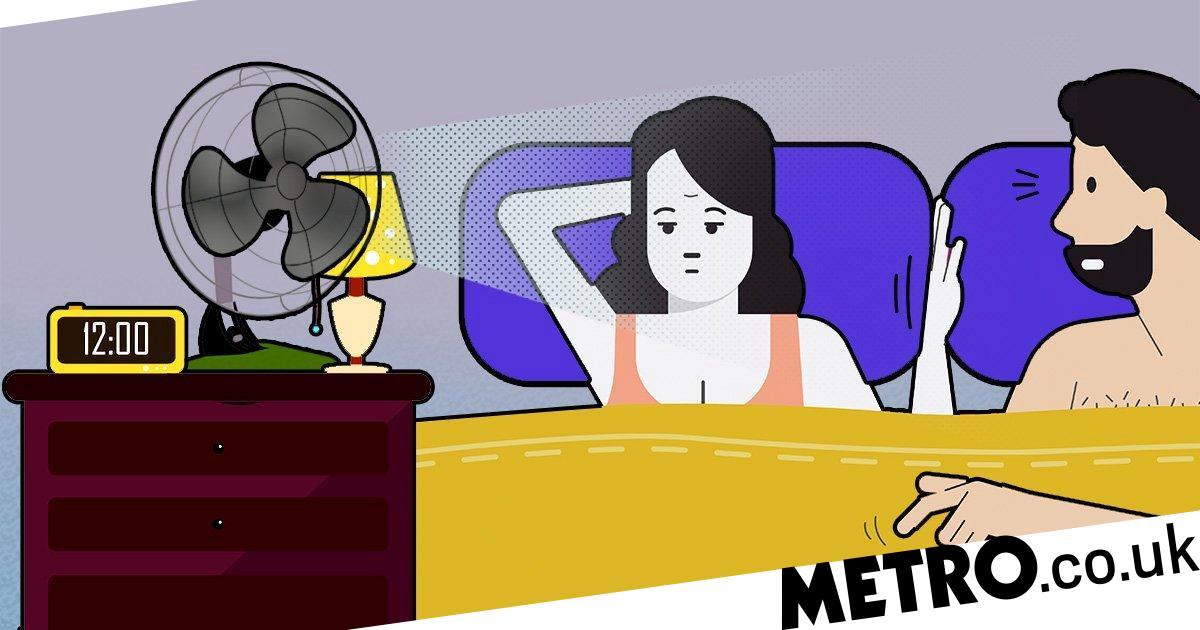 It’s summer! It’s hot and sticky! You can actually see people’s bodies without the usual layers of jumpers and duster jackets!

It’s the prime time for a fling, whether you’re on holiday or sticking around in the UK.

But be warned, sweet, naive daters, because your new situationship might not be due to reasons as innocent as summer horniness or a shared appreciation of old episodes of Ramsay’s Kitchen Nightmares.

If you are one of those blessed few with a proper room fan or – whisper it, so you don’t alert anyone to your obviously wealth – air conditioning, you might be getting used.

Yes, sweet summer daters, there are indeed individuals in this world who would continue a relationship (or whatever you call ‘regularly having sex with no labels’) purely for the sake of a chilled night’s sleep.

One woman guilty of such charges is Sophia (not her real name, as she is full of shame), a 28-year-old working in communications in London.

Sophia tells Metro.co.uk: ‘A few summers back I was seeing a guy I knew was bad for me. He was rude, arrogant, and treated me like sh*t. He also wasn’t great in bed. Don’t worry, he’s conceited enough that if he reads this he won’t guess I’m talking about him.

‘Anyway, I knew I should break things off, but every time I stayed at his I got the best night’s sleep. In the summer, a big part of that was that he had this big fan that went full blast all night.

‘Obviously I tried getting a fan but I lived in a house-share with not much storage space, so I felt stupid buying something I would only need for a few days a year, and every time I went to a shop on my way home they were sold out. It was that summer when it was scorching.

‘So instead I just kept sleeping with the guy. I was tired and hot!’

When asked if she then ended things once the temperature dropped, Sophia’s answer was, of course, no.

‘Yeah, I then just kept sleeping with him because I’m stupid,’ she says. ‘Eventually I did end things! But for that summer it was definitely the fan set-up that kept me going back.’

Amber (also not her real name) postponed a breakup because her then-boyfriend’s parents had an outdoor pool – and where better to spend a sweltering summer?

And when Fiona, then 19, was living in Paris, a ‘major reason’ she continued to see her ex was because his flat was so much cooler than hers.

‘I lived in a ‘chambre de bonne’, AKA a shoebox. I had to store my shoes in the shower and then shower at the gym, that’s how small it was.

‘My ex shared a beautiful apartment with his brother who was never there, so needless to say I spent the vast majority of my time in Paris at his apartment and very little time in my own. I loved him, but I especially loved his apartment.

It was beautifully cool. Mine didn’t have a fan, let alone air con. Plus, his flat wasn’t eight floors up (bearing in mind heat rises). The heat in our block of apartments seemingly rose and all travelled to my flat.

‘In march when I arrived it wasn’t a problem, but by the mid 30s of July in Paris it was unbearable.’

Over on Twitter you’ll find a load of people proudly proclaiming that they’d date or sleep with someone if the object of their non-affection had a way to reduce the unbearable heat.

Across the pond in the US, where air conditioning is more common, using people for their cooled homes is prevalent.

The impact of air con on sex and dating is even explored in Broad City, when Abbi simply can’t go on with Male Stacy (played by Seth Rogen) after the loss of the AC unit.

Is it wrong to continue to date someone for the summer in the hopes that you’ll be able to get some sweat-free sleep?

Honestly, we can’t answer that. It’s not illegal, but you might feel a little morally dubious. Investing in a proper standing fan for your own room, and getting some decent cooling sheets (then sticking them in the freezer), might be worth it to avoid the lingering guilt and annoyance of spending romantic time with someone you don’t actually like.

What we can do, however, is provide a very easy test to check if your summer fling is actually just a cool air chaser.

Ready? It’s pretty simple. Just suggest that you stay at theirs. If they have excuse after excuse, next time you’re together casually drop into conversation that your fan/air-conditioning/magically cool room isn’t working and you, too, are struggling in the heat. If they ghost, you have your answer.